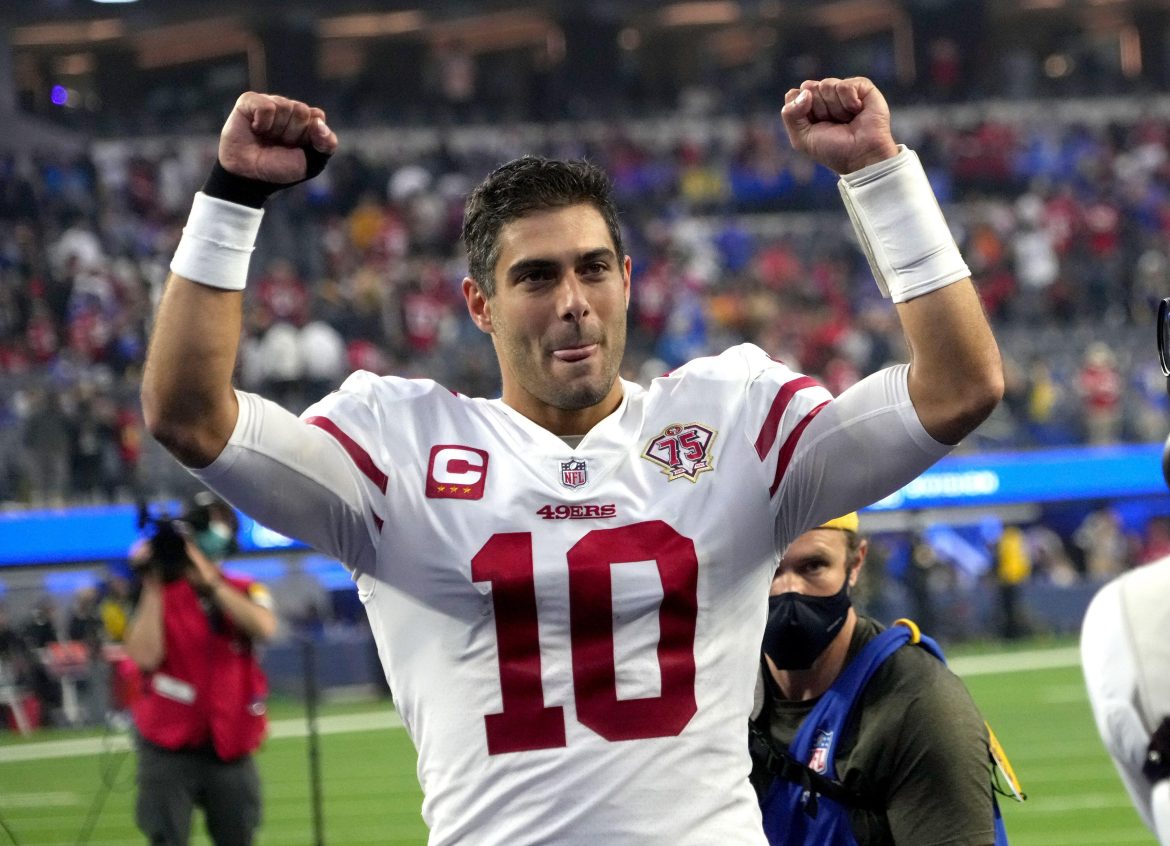 Jimmy Garoppolo has gone from being an unwanted quarterback in San Francisco to the guy the 49ers are pinning their Super Bowl hopes on this season.

Garoppolo threw four touchdown passes Monday night to lead the 49ers to a 38-10 victory over the Arizona Cardinals in a game played in Mexico City. The NFL’s fifth international game in 2022 and first in Mexico since 2019 was a rout.

Many among the crowd of 78,427 at Estadio Azteca loved it. Red-clad Niners fans filled the stadium, home of soccer teams Club America and Cruz Azul.

“The whole atmosphere tonight, I haven’t played in anything like it,” Garoppolo said. “It was electric, the fans were nuts, they were cheering throughout the whole game. It seemed like a soccer game at some points, just the passion they brought. It was really cool. I’d love to do it again.”

Garoppolo tossed a pair of TD passes each to Brandon Aiyuk and George Kittle, helping the 49ers win their third straight game to improve to 6-4 and a first-place tie with the Seattle Seahawks in the NFC West.

Jimmy buys some time and finds Kittle for his second touchdown pass pic.twitter.com/szP0NMFwkB

Garoppolo led the 49ers to the Super Bowl following the 2019 season and a pair of road wins in the playoffs last season. But he was on the bench to start the season after the team named 2021 first-round pick Trey Lance the starting quarterback. The 49ers couldn’t trade Garoppolo following offseason shoulder surgery so they restructured his contract and kept him as a backup.

Lance suffered a season-ending knee injury in Week 1 and the team turned to Garoppolo. The 49ers also acquired star running back Christian McCaffrey from Carolina in October to bolster the offense.

“I think the past couple weeks we’ve been putting together some good games,” Garoppolo said. “Today was probably our best full game we put together, but we’ve got a long way to go, there’s some yardage we left out there and even some points we left out there, so it’s a nice thing that guys are still hungry.”

Garoppolo has 15 TD passes and only four interceptions this season. His four TD passes against the Cardinals tied a career-best. He hasn’t thrown an interception in three straight games, the longest stretch of his career. The 49ers are 14-0 in games where Garoppolo doesn’t throw a pick.

“I think Jimmy’s doing a great job,” Niners coach Kyle Shanahan said. “I think Jimmy always has. When Jimmy’s been healthy out there, we’ve had our guys around him, I think he plays at a very high level. And I think he did that today as good as he has. Very fortunate to have him.”

Deebo Samuel caught seven passes for 57 yards and added a 39-yard TD run for the 49ers.

Run that back, Deebo! @19problemz

The struggling Cardinals fell to 4-7. Backup QB Colt McCoy started for the injured Kyler Murray and took several hard hits from a ferocious defense. He was sacked three times and threw one interception.

“It’s just a bummer we didn’t find a way to win that game,” McCoy said. “But San Francisco played hard. They’re a good football team, and we just didn’t make enough plays. But for the crowd, for the atmosphere, being able to play internationally in Mexico City, I thought it was fantastic.”

The Cardinals and 49ers played the first regular-season NFL game in a country outside the U.S. when they met in Mexico City on Oct. 3, 2005. The Cardinals beat the 49ers 31-14 in that one.