John Paul I, ‘Smiling Pope’ for a month, moves towards sainthood 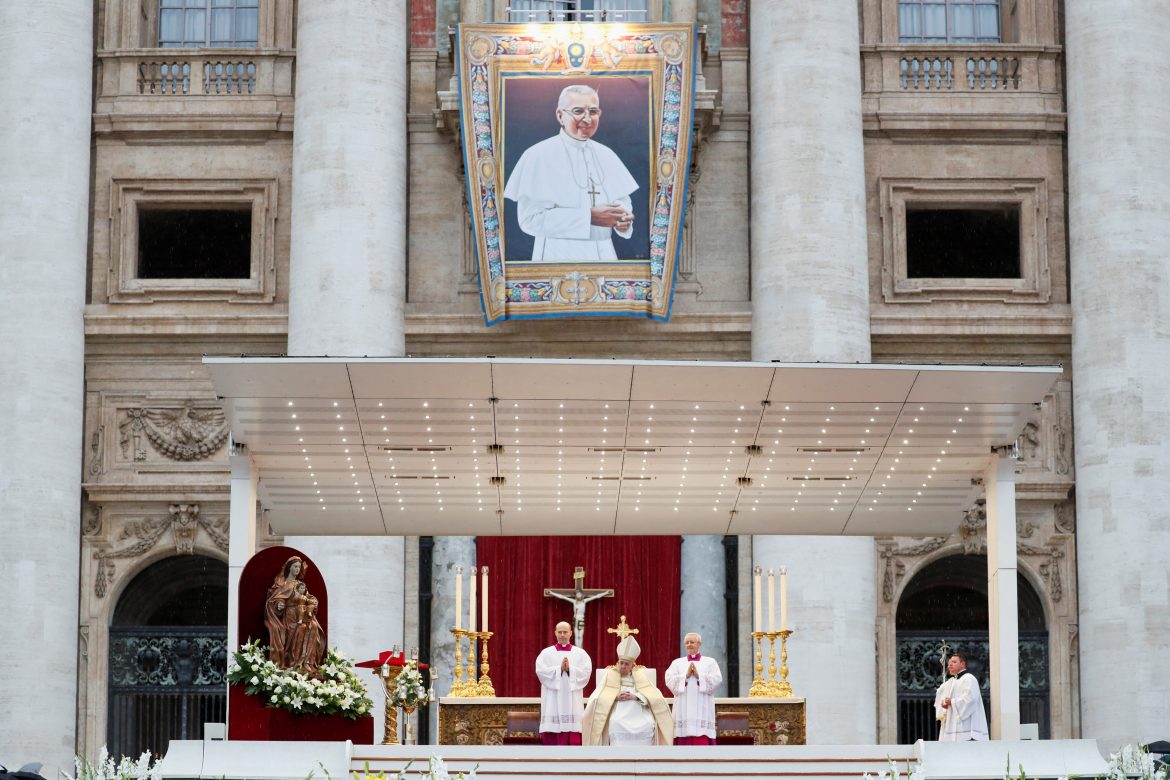 Pope John Paul I, who died in 1978 after only 33 days as pontiff, moved closer to sainthood on Sunday with the Vatican still having to dismiss lingering conspiracy theories that he was a victim of foul play.

Pope Francis beatified his predecessor at a ceremony in St. Peter’s Square before tens of thousands of people. Beatification is the last step before sainthood in the Roman Catholic Church.

John Paul was known as “The Smiling Pope” because of his meekness and simplicity.

“With a smile, Pope John Paul managed to communicate the goodness of the Lord,” Francis said in his homily, speaking as people huddled under umbrellas in a thunderstorm.

“How beautiful is a Church with a happy, serene and smiling face, that never closes doors, never hardens hearts, never complains or harbors resentment, does not grow angry or impatient, does not look dour or suffer nostalgia for the past”.

He was elected pope on Aug. 26, 1978 following the death of Pope Paul VI, taking the name John Paul to honor his two immediate predecessors.

Two nuns of the papal household who heard no response to knocks on his door at 5:20 a.m. on Sept. 29 to bring coffee found him dead in his bed. Doctors said he died of a heart attack and aides said he had complained of chest pains the day before but did not take them seriously.

At first the Vatican, uneasy saying two women had entered the pope’s bed chambers, said he was found lifeless by a priest.

The Vatican corrected itself but the misstep sprouted conspiracy theories.

In 1984 “In God’s Name – An Investigation into the Murder of Pope John Paul I,” British author David Yallop argued that the pope was poisoned by a cabal linked to a secret Masonic lodge, and spent 15 weeks on the New York Times bestseller list.

The New York Times’ own review of the book, however, ridiculed Yallop’s investigative techniques and in 1987 another Briton, John Cornwell, wrote a book called “A Thief in the Night,” meticulously dismantling conspiracy theories.

Although widely debunked, the idea of a pope being murdered in his bedroom in the 20th century irresistibly entered the collective consciousness and in the film “The Godfather Part III, a pope named John Paul I was killed with poisoned tea.

“There is no truth to it at all,” said Vatican Secretary of State Cardinal Pietro Parolin, when asked about the conspiracy theories on Italian television on Friday.

“It is a shame that this story, this noir novel, goes on. It was a natural death. There is no mystery about it,” Parolin said.

Falasca, who was the deputy postulator, or promoter, of the sainthood cause, said he was being beatified not because of what he did as pope but the way he lived his life.

John Paul is attributed with the miracle healing of an 11-year-old Argentine girl who had a severe brain inflammation, epilepsy, and suffered septic shock.

The Roman Catholic Church teaches that only God performs miracles, but that saints, who are believed to be with God in heaven, intercede on behalf of people who pray to them.

A second miracle will need to be verified for John Paul to be declared a saint.