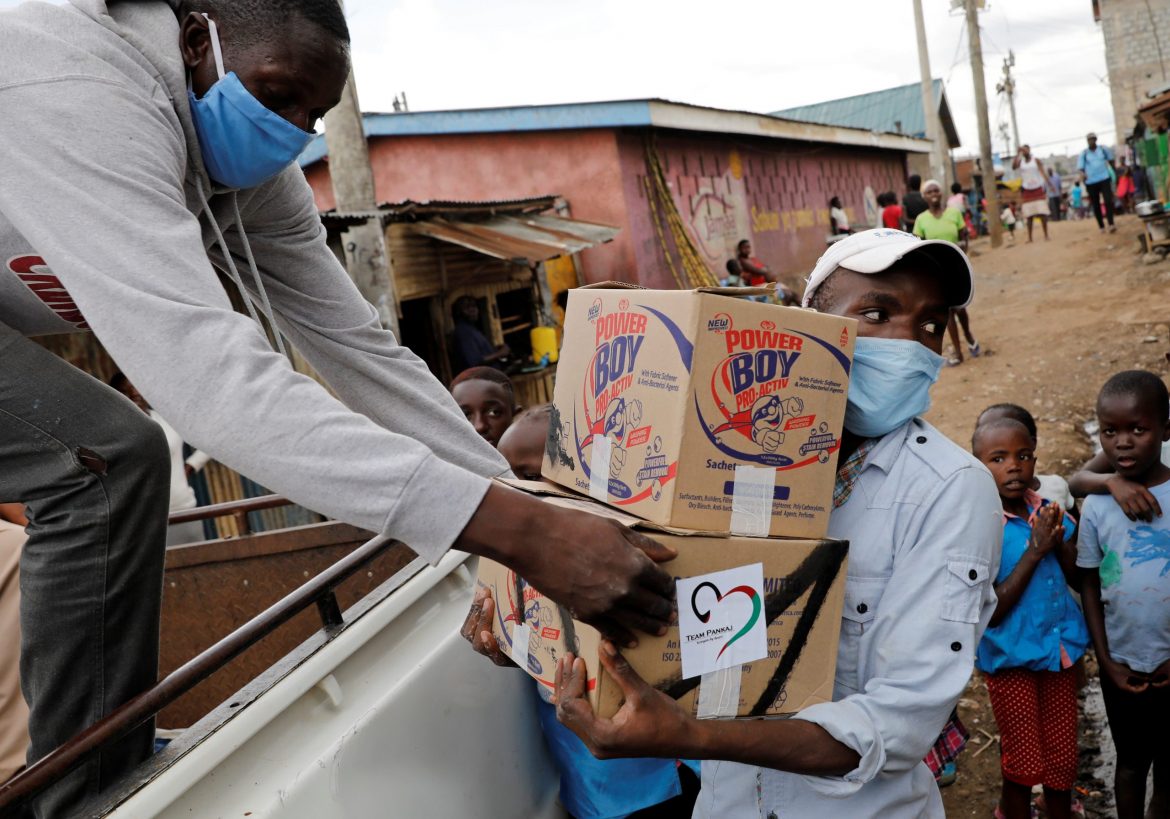 Safari operator Pankaj Shah would normally be showing tourists around the beauty spots of his native Kenya. Instead, he is spearheading a volunteer effort to feed thousands of families left penniless when the new coronavirus devastated the economy.

“One old woman told us she hadn’t eaten for days – her sons had stopped supplying her because they have no work,” he said, walking down a line of young men packing rice, flour, beans, and long-life milk into boxes.

Kenya reported its first case of the coronavirus on March 12. Schools closed the following week. Businesses shut, families left the capital, and the casual work sustaining the vast majority of urban Kenyans dried up.

The government offered tax breaks – little help to those too poor to pay taxes. Newspapers called for “total lockdown” and forgotten families in the slums began to starve and to seethe.

“People were getting hungry and angry,” Shah said.

Someone had to act, he decided, and he asked a couple of friends to pitch in. A local school, shuttered by the virus, offered their premises as headquarters.

Kenya’s Asian community – officially recognized three years ago as the nation’s 44th tribe – rallied round. They brought cheques or truckloads of food or vegetables planted for export and now marooned by the lack of flights. The operation has been going daily for three weeks.

Shah’s volunteers, who call themselves Team Pankaj, have sent out 24,000 hampers since setting up on March 22, each with enough food to last a family of five for two weeks.

He is asking wealthy Kenyans to donate 4,000 Kenya shillings each ($40) to fund the hampers – about the cost of two pizzas and a bottle of wine, he points out.

“I just need half the rich people here to care enough to fund a hamper,” he says impatiently.

His phone buzzes with community leaders, imams, church leaders, and chiefs asking for help. Shah tests potential partners with a small distribution – say 100 boxes – and scales up if they handle it well.

Last week he sent two lorryloads of food to a distribution in the Deep Sea slum, where residents presented orange tokens and had their fingers inked before carting away the boxes and bags of vegetables. Volunteers helped pregnant women and those with babies.

Mary Wangui, 29, said she had been desperate. “You can’t hug a child to sleep when they are hungry,” she said.

Although Shah has never run any kind of aid operation before, he has a guiding spirit: Mother Teresa, whom he said he met more than three decades ago in Nairobi.

A wheel spun off the Roman Catholic nun’s ancient pickup truck and hit his new Mercedes, he said.

The accident brought an unlikely friendship between a “young, wild” businessman and the world-famous missionary who cared for the poor, he said. He volunteered with her for three months, he said, and adopted a baby girl from one of her orphanages.

“I think about what she would do,” he says after the coronavirus hit. “That’s the inspiration for the rest of my life.”