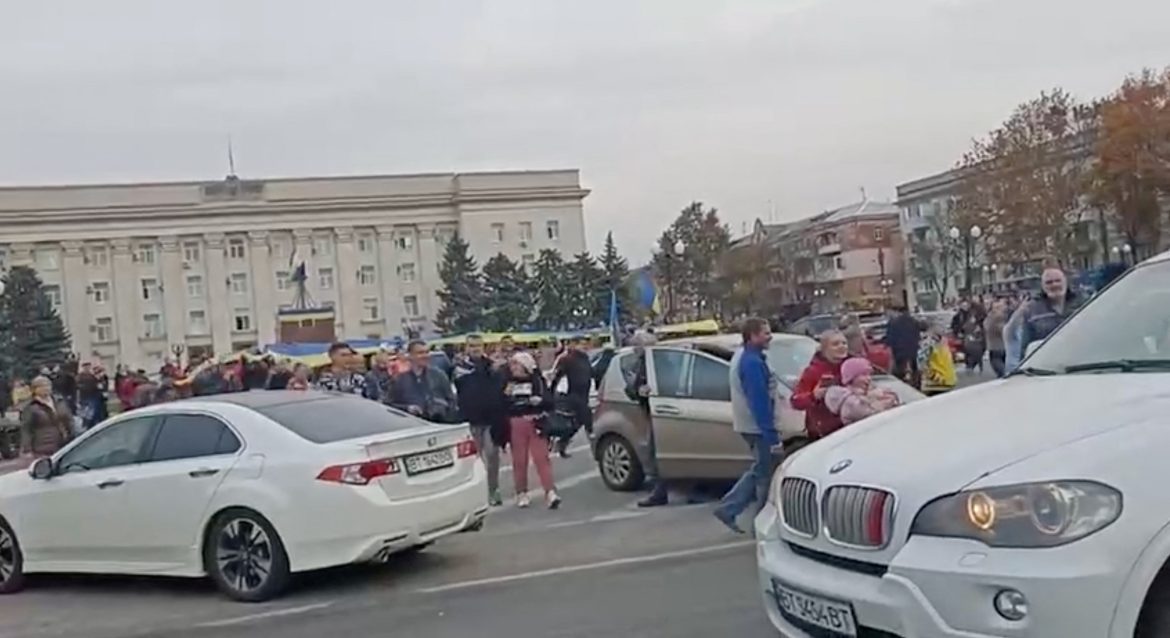 Ukrainians celebrated the “historic day” on Friday as their troops marched through the center of Kherson after Russian forces abandoned the city, which had been one of the nation’s named objectives for launching their Feb. 24 invasion and the only regional capital they had successfully taken.

“Today is a historic day,” Ukrainian President Volodymyr Zelensky announced in his evening Friday address. “We are getting the south of the country back, we are getting Kherson back.”

At the time, Zelensky said that special units were already in the city. The main defenders were still on the outskirts of the city.

Videos posted to social media show joyous celebration as Kherson residents respond to their liberation. One video shot from inside a military vehicle shows civilians cheering and waving as the vehicle goes down the street. Another from 4:29 a.m. (ET) shows a crowd breaking into jubilant song. Yet another shows a cluster of people brandishing the blue and yellow national flag.

Over a month ago, Russia declared that these same residents voted in a referendum to break from Ukraine as one of four regions they attempted to illegally annex.

Ukraine’s defense intelligence agency declared Kherson as being restored to Ukrainian control. They ordered Russian troops remaining in the city to surrender to Kyiv’s forces.

The victory has been seen as another humiliation for the Kremlin.

“Russia’s announced withdrawal from Kherson marks another strategic failure for them,” British defense minister Ben Wallace said in a statement on Saturday. “In February, Russia failed to take any of its major objectives except Kherson. Now with that also being surrendered, ordinary people of Russia must surely ask themselves ‘What was it all for?’”

Wallace said the withdrawal of Russian troops from Kherson was welcome, but that the Russian Federation remained a threat.

U.S. National Security Adviser Jake Sullivan said on Friday that it looked like an “extraordinary” and “remarkable” victory for Ukraine.

“And it has broader strategic implications as well because being able to push the Russians across the river means that the longer-term threat to places like Odesa and the Black Sea coastline are reduced from where they were before,” Sullivan added.

Yet the victory is just the start of a new stage as Russian damage remains a threat to all within the city. In particular, Zelensky said that measures to remove a lot of mines from the city to improve safety would start as soon as possible.

Ukrainian-appointed regional official Serhii Khlan reported yesterday that Russian troops were blowing up civilian infrastructure as they retreated, including power facilities and bridges.

U.S. satellite imagery company Maxar said on Friday that there was notable new damage to the Nova Kakhovka dam located north of the city on the Dnipro River.

The dam is the source of accusations of sabotage from both Ukraine and Russia, who have both accused each other of planning to intentionally breach the dam to cause mass destruction. The dam would flood the land to the south of it, impacting the region around the city of Kherson.

“Satellite images this morning … reveal significant new damage to several bridges and the Nova Kakhovka dam in the aftermath of the Russian retreat from Kherson across the Dnipro river,” Maxar said in a statement.

Specifically, Maxar said sections of the northern extent of the dam and sluice gates were “deliberately destroyed.”

Ukraine forces are strengthening their front-line positions, Zelensky said, but the Ukrainian government has been tight-lipped about troop locations to preserve their safety.