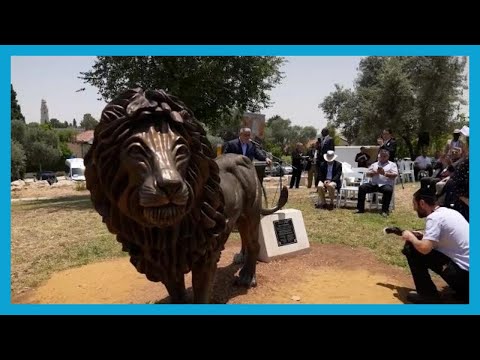 A bronze “Lion of Judah” statue created by American Christian artist Max Grenier has finally found a home in Jerusalem following a two-year delay further complicated by the COVID-19 pandemic.

The 1,134-pound, 7-foot-long sculpture celebrates the friendship of the Jewish people and American Christians and was donated to Israel by a group of evangelical leaders. Finding an appropriate location for the statue and securing the necessary approval, however, proved to be more challenging than anticipated.

It took a chance encounter between Jerusalem Deputy Mayor Fleur Hassan-Nahoum and former U.S. Congresswoman Michele Bachmann last year to finally cut through the red tape and resolve the logistical and bureaucratic challenges impeding the sculpture’s installation, according to the Jerusalem Post. The “Lion of Judah” ultimately found a home in Jerusalem’s scenic Bloomfield Garden overlooking the Old City walls, where it was recently dedicated in a formal ceremony.

Hassan-Nahoum said Bachmann approached her at an event the two attended last year with a request to help resolve the issues holding up the statue’s installation.

“She asked me to help resolve the problem, and as the head of the Public Art Committee of the city I looked into it,” Hassan-Nahoum told the Post. The deputy mayor recounted the challenges of finding the right location for the artwork among several proposals but said she ultimately “strongly felt that this statue needed to be in a park, because it represents a lion, and to have some iconic view of the Old City,” she said. “Finally, we selected this spot.”

The Bloomfield Garden features several other monuments and works of art, including the Fountain of the Lions donated by former German Chancellor Helmut Kohl in 1989.

Hassan-Nahoum lauded the statue as “a symbol of friendship between the evangelical community and the people of Israel.”

“The Lion of Judah represents the glory and the strength of the Jewish people, and to get a gift like that in Jerusalem, our eternal capital, from the Christian community is very special,” she said.

“Max Greiner is a very well-known artist in the Christian world,” said Rabbi Pesach Wolicki, a prominent figure in Christian-Jewish relations who was involved in the initiative.

“When you travel in different cities in the world, you see public sculptures that sometimes have been standing there for hundreds of years and they are part of the permanent landscape of the city,” he said. “Knowing that we are involved in a project that will be part of the landscape of the city of Jerusalem representing the friendship between the Christian Zionist community in America and the people of Israel is very meaningful.”

The rabbi said that when he saw the statue for the first time, he was particularly impressed with the beauty of the lion’s face and asked Greiner what inspired the exquisite design.

“He explained that he wanted it to look strong but not intimidating and therefore he carefully designed the expression, conveying strength and majesty but also softness and love,” Wolicki recalled. “In my opinion, this is exactly the image that we as the people of Israel strive to and most times achieve, projecting strength but also compassion and love.”

“We thank you for this sculpture representing the Lion of Judah. We thank you Lord that you are the Lion,” prayed Nick Vujicic, Chief Executive Officer of Life Without Limbs, during the dedication ceremony, according to CBN News.