Macron fights to save his parliamentary majority and reform agenda 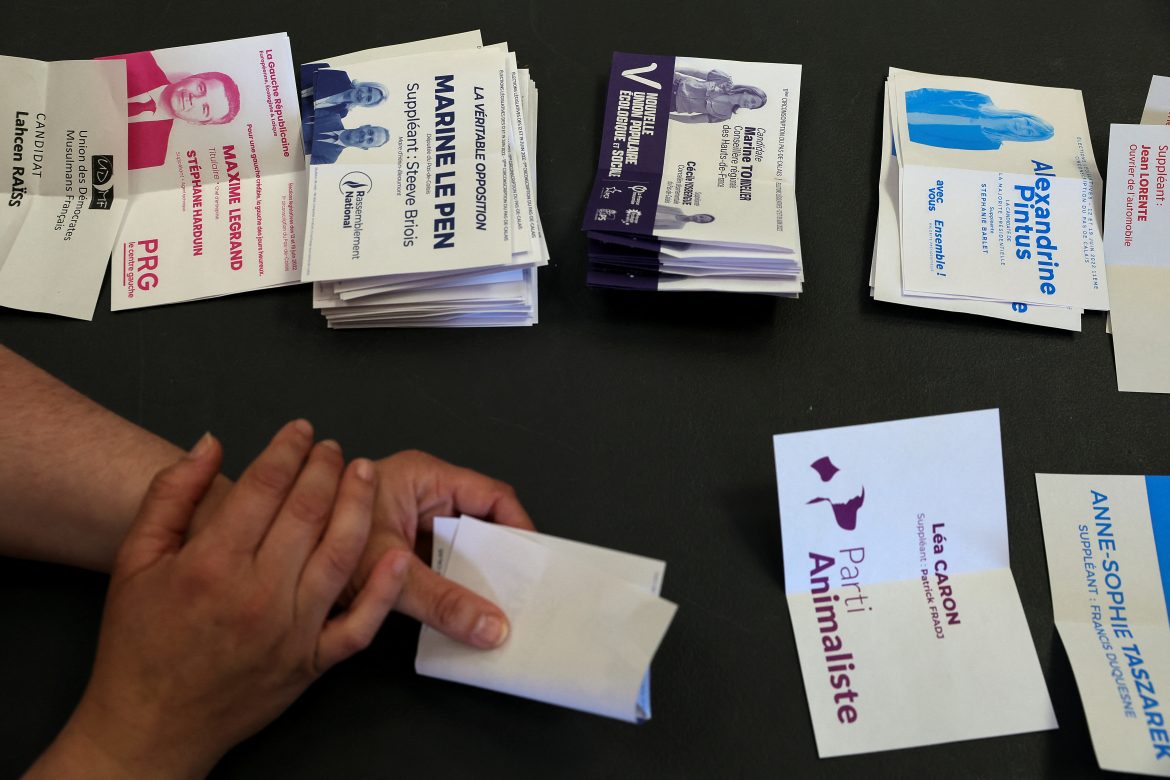 President Emmanuel Macron could lose his outright majority in France‘s parliament and the ability to push through his economic reform agenda with a free hand after a strong showing by a new left-wing alliance in the first round of voting.

Macron’s centrist alliance and the NUPES coalition led by the hard left veteran Jean-Luc Melenchon each won 26% of the vote amid record abstentions on Sunday, though it is the June 19 second round alone that will determine the division of seats.

Elabe projected Macron’s Ensemble! alliance would win between 260-295 National Assembly seats – with the mark for an outright majority set at 289 seats – and that the left would secure 160-210 seats, a big increase from 2017.

“Come out and vote next Sunday to reject the evil politics of Mr Macron,” Melenchon tweeted after Sunday’s vote.

If Macron’s centrist alliance loses its outright majority in the run-off round, the president will be forced into making messy pacts with factions of the center right or center left who refuse to align with Melenchon on a bill-by-bill basis.

It could also trigger a cabinet reshuffle.

At stake is Macron’s ability to pass reforms including a contested pension reform that would see the French work longer, a change the former investment banker says is necessary to ensure long-term order to the public finances.

His opponents on the left are pushing to cut the pension age and launch a big spending drive as surging inflation drives the cost of living higher and erodes wages. Melenchon depicts Macron as an economic liberal who protects the rich and not hard-up households.

“Contrary to the words of Mr Melenchon, who really has a problem with reality, we are the political force that has the most candidates in the second round, there are candidates from presidential majority in three-quarters of constituencies, and we will mobilize this week to win a clear and strong majority,” she told reporters in her Calvados constituency.

However, in a sign of investor unease at the prospect of Macron losing full control of the lower house, French banking stocks fell in Monday trading.

France‘s third largest listed bank Societe Generale had dropped 3.6% by 0850 GMT, underperforming the CAC40 index which was down 2.1%. Its two larger peers BNP Paribas and Credit Agricole lost 2.8% and 3.2% respectively.

“A nervy wait ahead of the second round,” Deutsche Bank wrote in a client briefing note.

No poll shows NUPES winning a ruling majority – a scenario that would plunge the euro zone’s second largest economy into an unstable period of cohabitation, where the president and prime minister come from different political groups.

Ensemble! won 25.75% of the popular vote while the NUPES bloc secured 25.66%, according to the Interior Ministry’s final tally.

Several Melenchon allies accused Interior Minister Gerald Darmanin of manipulating the count by not including some candidates who had publicly said they supported the left-wing alliance within the bloc’s tally.

The Interior Ministry did not immediately respond to a request for comment. Budget Minister Gabriel Attal said: “(The left) always call into question the figures … it’s their specialty.”