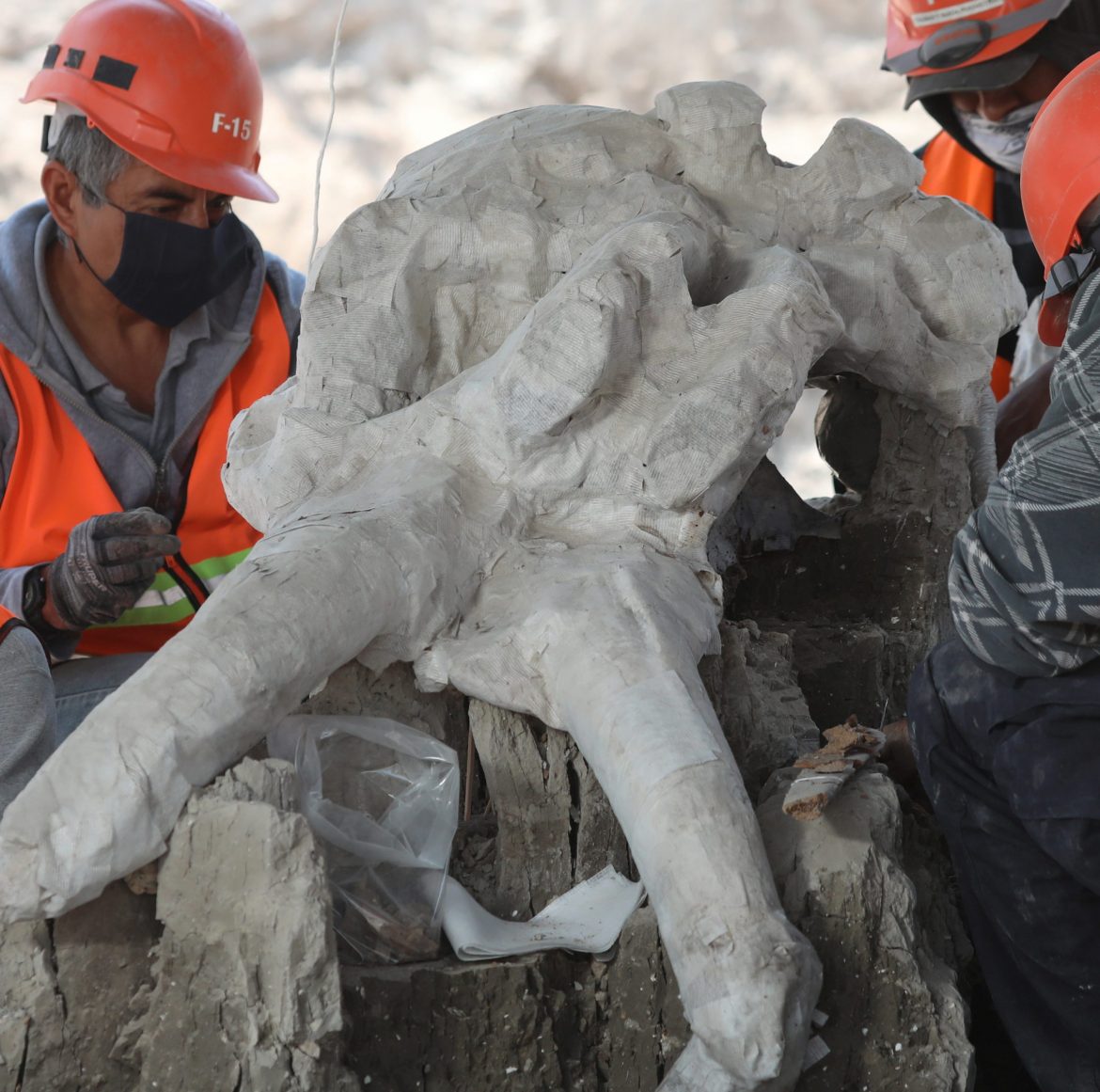 Alongside construction crews racing to build the Mexican capital’s new airport, skulls and curving tusks of massive mammoths peek through the dirt as archaeologists dig up more and more bones belonging to the ice age’s most famous mammal.

The latest discoveries include two huge skulls, along with scattered ribs and limbs, found just inside the perimeter of where a new civilian airport is being built, about 30 miles (50km) north of downtown Mexico City.

To date, some 70 individual mammoths have been unearthed since late last year. Dating back more than 10,000 years, this part of Mexico once teemed with mammoth herds, drawn to the lush grasslands and lakes that dotted the landscape.

The hulking bones left behind spawned legends of giants that dazzled both indigenous civilizations and Spanish conqueror Hernan Cortes.

Standing next to one partial skeleton, lead archeologist Ruben Manzanilla, explains that this spot likely would have been part of a meandering shoreline thick with mud on the edge of a lake formed at the end of the last ice age.

“When an animal this size fell here, it got stuck and couldn’t escape,” he said, as a convoy of construction trucks rumbled down a dusty road.

Manzanilla’s Columbian mammoth, which unlike its cousin the wooly mammoth had little fur, certainly lived up to its imposing name.

He estimates it weighed roughly 20 tonnes, or double that of a Tyrannosaurus Rex, and reached a height of more than 4 meters (13 ft), about twice as tall as pro-basketball legend Shaquille O’Neal.

Manzanilla believes countless mammoths likely succumbed to the muck, but he also points to evidence from nearby sites that early human hunters also used flint spears to bring them down and set rudimentary traps in the water.

The urban footprint of metropolitan Mexico City, home to 22 million people, has since replaced nearly all of the interconnected lakes that filled the area through Aztec times.

Two Tlaxcalan kings in 1519 showed Cortes what was likely a mammoth femur and told him they descended from terrible but very tall men, according to an account by the conqueror’s contemporary, soldier-turned-chronicler Bernal Diaz del Castillo.

“We were sure there had been giants in this land,” wrote Diaz del Castillo.

The incident is summarized in an article on the history of mammoths in Mexico in the current issue of Arqueologia Mexicana by Leonardo Lopez Lujan.

Even as more mammoth remains turn up, the digs have not slowed progress on the new airport, a top priority for President Andres Manuel Lopez Obrador.

Since the construction site lies within an existing air force base, the military is also picking up the tab for a team of 30 archaeologists from the National Institute of Anthropology and History (INAH), along with nearly 200 laborers, working on the project.