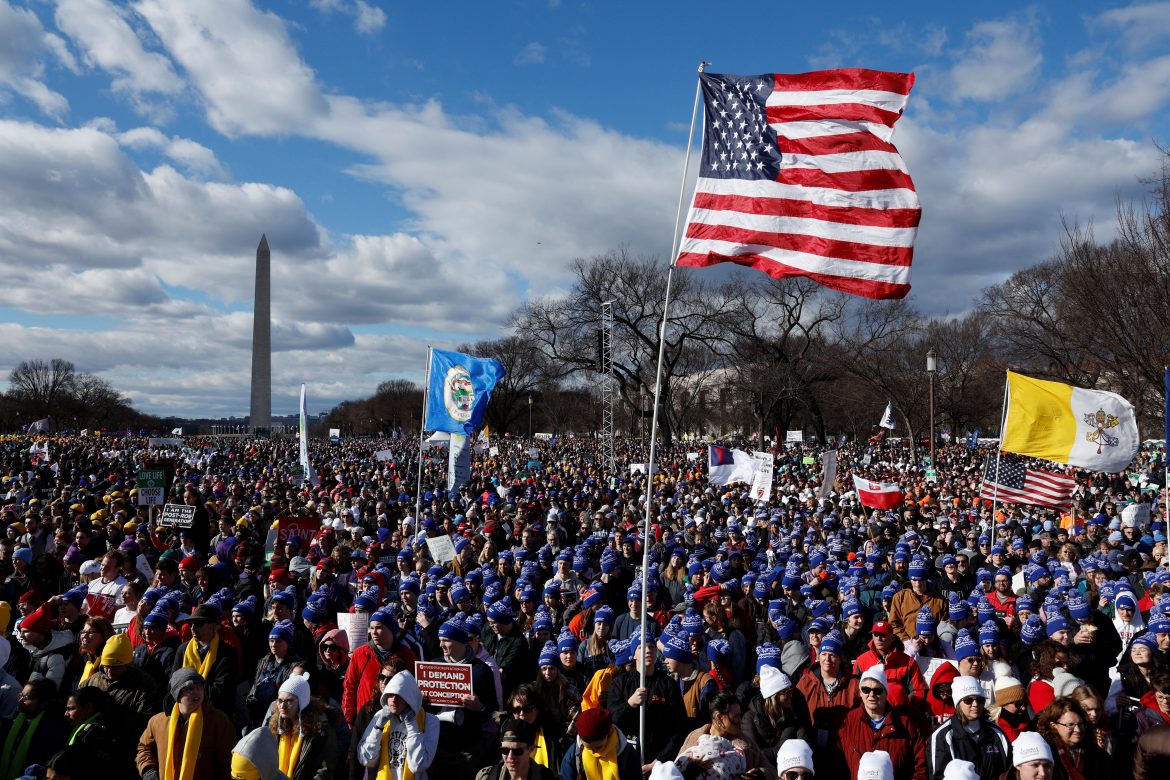 This year’s annual March for Life — the first since the overturning of Roe v. Wade — will observe its 50th anniversary today in Washington D.C. amid calls to persevere in a nation that’s become increasingly hostile toward advocates of the unborn.

The march began in 1974 as a protest against the Supreme Court’s 1973 Roe v. Wade decision, which legalized abortion on a federal level. Although Roe has been overturned, March for Life organizers say there’s still much that needs to be done, stating that “the goal of the national March for Life is to not only change laws at the state and federal level, but to change the culture to ultimately make abortion unthinkable.”

“As we enter this new post-Roe era, we know our mission is far from finished,” March for Life tweeted. “Now is the time to reflect with gratitude upon all we’ve accomplished these past 50 years, but it is also the time to press on towards the battles that lie ahead.”

One of those battles is securing the Hyde amendment, a current policy that prohibits federal funds like those used in Medicaid, from paying for abortions. Pro-abortion activists would like to see it completely abolished and use taxpayer money to fund abortions.

Another issue is the battle against attacks on pregnancy centers. FISM News reported today that the FBI offered a $25,000 reward Thursday for information leading to arrests in numerous attacks on pro-life pregnancy centers. This announcement comes after months without a single arrest in the cases, despite video and other evidence of the perpetrators.

FISM News previously reported on an increase in violence afflicting pro-life clinics in recent months. According to CatholicVote “at least 78 pregnancy resource centers and offices of pro-life groups have been attacked and vandalized since a draft Supreme Court opinion overturning Roe v. Wade was leaked in early May.”

In a post-Roe America, hostile pro-life and even anti-Christian sentiments have risen sharply.

In September 2022, California Gov. Gavin Newsom joined in on the vitriolic attitudes toward pro-life advocates, targeting Christians in particular, when he launched a series of billboards in conservative states that twisted the words of Jesus Christ to promote abortion.

Newsom placed billboards in seven states encouraging women to come to California if they couldn’t get an abortion in their state. A billboard in Oklahoma and Indiana read, “need an abortion? California is ready to help” and continued by quoting Mark 12:31, in which Jesus says, “Love your neighbor as yourself. There is no greater commandment than these.”

“Imagining the devil in his advertising office at the top of the highest skyscraper in hell giggling to himself as [Newsom] uses Jesus’ own words to support killing babies,” the organization said.

Tony Dungy, NFL Hall of Fame coach and current NFL analyst, has also been condemned for his support of and attendance at the March for Life.

Sports editor for “The Nation,” Dave Zirin, recently said he is “done with Tony Dungy and the way the NFL and NBC coddle his right-wing extremism.” Referring to the March for Life and the overturning of Roe, Zirin went on to say that “the thousands of people descending upon Washington … to celebrate a fascistic, discredited Supreme Court and the loss of our rights [is] shameful.”

According to an article written by Jeanne Mancini for Fox News, March for Life president, “advocacy for the unborn have made it impossible for our nation and its leaders to simply ‘look the other way’ or feign ignorance about the harsh reality of abortion and the beauty of life.”