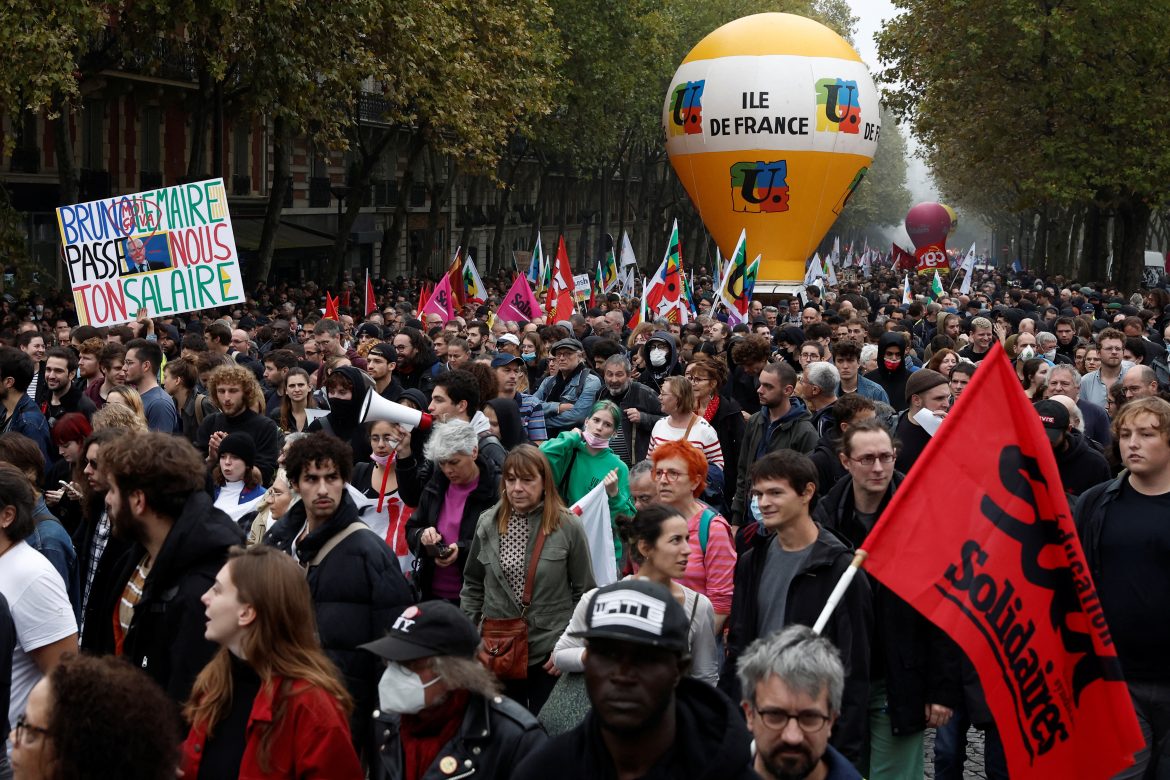 Massive strikes and protests are growing across European cities as the NATO-backed war in Ukraine, attacks on the Nordstream pipelines, and so-called progressive economic and agricultural policies coming from the EU are leading to skyrocketing energy and food prices and mounting costs of living for everyone.

European governments have been warning of the likelihood of coming food shortages and energy blackouts across the continent this winter. Energy prices have already begun to multiply in many countries.

Here are details of some of the protests and actions going on:

Thousands of people took to the streets of Paris on Sunday to protest against soaring prices. Many are calling for President Macron to resign over the high prices citizens face as the government and NATO continue to support Ukraine and sanction Russia as energy costs rise and potential winter blackouts loom.

Workers at TotalEnergies ended their strikes at all but two sites in France on Thursday, and morning staff at the Normandy and Feyzin refineries were the only ones to continue the stoppage, a CGT union representative said.

Strikes have affected work at 20 of France’s 56 nuclear reactors, an FNME-CGT power union representative said on Wednesday, delaying maintenance at many of them ahead of planned talks with operator EDF. The union has been staging rolling strikes over wages at some nuclear power plants.

The CGT said it was calling for a strike at luxury goods company L’Oreal to seek higher wages for staff.

Regional train traffic in France was cut by about half on Tuesday as several unions called a nationwide strike. They are seeking to capitalize on anger over decades-high inflation to expand weeks of industrial action at oil refineries to other sectors. There was also some disruption to schools as the strike primarily affected the public sector.

Thousands took to the streets to protest energy hikes in London. Despite the large crowds, much of Britain’s mainstream media has refused to cover the protests. India’s WION News, however, gave an inside view of the frustrations of those in England.

Nearly 2,000 staff at the Atomic Weapons Establishment, which makes and maintains nuclear warheads, will vote on whether to strike after they rejected a 5% pay award, the Prospect union said on Wednesday. It said a ballot for its members at AWE would open on Oct. 24 and run for two weeks.

About 1,000 GXO drivers in Britain will take strike action over five days from the end of the month in a dispute over pay, the Unite union said on Tuesday, warning of disruption to beer deliveries.

More than 300,000 members of Britain’s largest nursing union have begun voting over a strike to demand a pay rise. Junior doctors and ambulance workers also plan to ballot over pay disputes. Rail workers have also walked out over disputes over pay and job security.

Thousands have taken to the streets in multiple German cities to protest NATO and EU actions, sanctions on Russia, and the skyrocketing cost of living that is resulting from their policies. Many held signs reading “Unser Land Zuerst,” which translates to “Our Country First.”

Pilots at Lufthansa’s Eurowings began a three-day strike over working hours on Monday, their union said, affecting tens of thousands of the budget airline’s passengers.

Dutch farmers continue their protests over progressive globalist government policies that they say will cripple their ability to grow food. The protests have been ongoing for months, though media coverage has waned since August.

Thousands of Hungarian students and parents protested on Oct. 14 in the second major rally in two weeks to support teachers who have been fired for joining a strike for higher wages, and more teachers being warned of dismissal.

Tens of thousands of Czechs protested in Prague on Sept. 28 against the government’s handling of soaring energy prices and the country’s memberships in NATO and the European Union.

The demonstration was a show of unity amongst vastly different groups who all oppose the ruling regime. The crowd, which stretched as far as the eye could see from atop tall buildings, included what Reuters referred to as “far-right and fringe groups,” as well as other parties, including Communists, singing and cheering together.

Protests in Prague against NATO and the EU! pic.twitter.com/MVbGCYCPpo

Thousands took to the streets in Brussels on Sept. 21 to protest soaring energy prices and the cost of living. A similar protest in June drew around 70,000 Belgian workers.