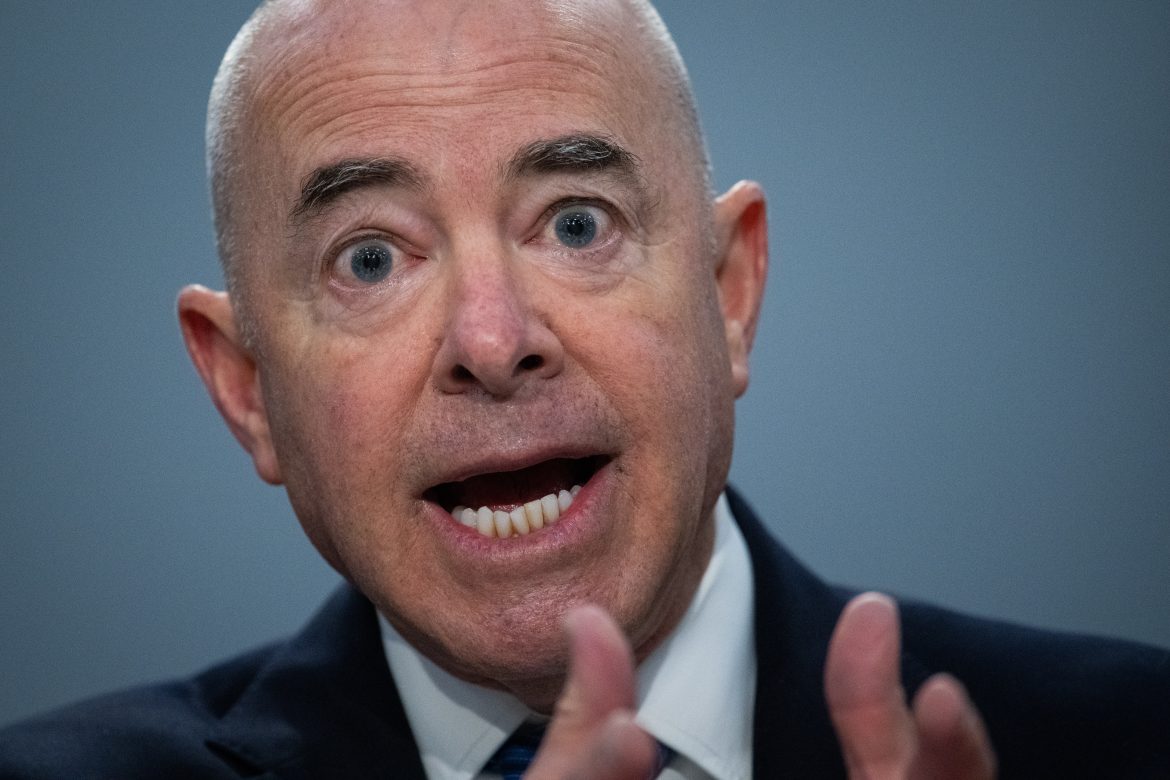 In all the yelling, arguing, and threats of impeachment that typified Secretary of Homeland Security Alejandro Mayorkas’ testimony over two days on Capitol Hill, brief statements and a polite exchange offered what might become the most substantive revelation.

Over the course of his Wednesday testimony before the House Appropriations Subcommittee on Homeland Security, Mayorkas announced he was creating a Disinformation Governance Board that would combat, through as-yet-unclear methods, the spread of falsities, particularly through social media.

In his prepared testimony for the subcommittee, Mayorkas said, “human smuggling organizations peddle misinformation to exploit vulnerable migrants for profit.”

This statement drew a follow-up question from Rep. Lauren Underwood (D-Ohio), who said, “Foreign adversaries attempt to destabilize our elections by targeting people of color with disinformation campaigns,” before asking Mayorkas what steps he planned to take to combat the spread of misinformation.

Mayorkas responded by announcing the creation of the aforementioned board, which will be headed by Nina Jankowicz of the Wilson Center, a non-partisan policy forum.

In a thread of tweets that was sophomoric in both tone and grammar, Jankowicz confirmed the board’s creation and promised, “one of the key reasons the Board was established, is to maintain the Dept’s committment [sic] to protecting free speech, privacy, civil rights, & civil liberties.”

More to come as we dig into the big job ahead. For now, thanks for the support 🙂

The idea of censoring for the sake of liberty is a tough sell, and will be made even tougher by the fact that the “non-partisan” leader of Mayorkas’ pro-freedom censorship board is the same person who only 12 days ago told NPR:

I shudder to think about if free speech absolutists were taking over more platforms, what that would look like for the marginalized communities all around the world, which are already shouldering so much of this abuse, disproportionate amounts of this abuse, and retraumatizing themselves as they try to protect themselves from it, you know, reporting, blocking, et cetera. We need the platforms to do more, and we frankly need law enforcement and our legislatures to do more as well. And in other countries that are looking at this, you know, the U.K. has an online safety bill that’s being considered right now where they’re trying to make illegal this currently, quote, ‘awful but lawful content’ that exists online where people are being harassed.

Perhaps the oddest facet of the governance board story is the comparatively muted response from Republicans.

When Mayorkas was questioned by the House Judiciary Committee on Thursday, he shared through his prepared testimony that one of his department’s goals was “increasing efforts to identify and evaluate mis- dis- and mal-information … including false or misleading conspiracy theories spread on social media and other online platforms that endorse violence, while protecting privacy, civil rights, and civil liberties.”

Mayorkas faced a hail of criticism from Republicans who took profound issue with his handling the southern border, the matter of the board received little attention, likely due to the urgency Republicans feel with regards to the end of Title 42.

This is almost certain to change rather quickly, as the several outspoken Republicans in the Senate and House have definitively taken note.

Louisiana Congressman Mike Johnson at one point during the hearing advised the secretary to start considering his next line of work, a thinly-veiled threat of pending impeachment, while Colorado Rep. Ken Buck said his constituents viewed Mayorkas as a traitor.

“I confess, I at first thought this announcement was satire,” Sen. Josh Hawley of Missouri wrote in a letter to Mayorkas. “Surely no American Administration would ever use the power of Government to sit in judgment on the First Amendment speech of its own citizens. Sadly, I was mistaken. Rather than protecting our border or the American homeland, you have chosen to make policing Americans’ speech your priority.”

Hawley said the new board was “almost certainly” a violation of the Constitution and demanded the secretary dissolve the board.

“It can only be assumed that the sole purpose of this new Disinformation Governance Board will be to marshal the power of the federal government to censor conservative and dissenting speech,” Hawley wrote. “This is dangerous and un-American.”

House Minority Leader Kevin McCarthy also came out in defiance of the formation of the Board calling it “Orwellian.”

“Leave it to Democrats to think free speech is the problem and more government is the solution,” McCarthy remarked in an exclusive interview with the The Daily Wire. “The notion that the same party that spent four years promoting the Russia collusion hoax, suppressed the Hunter Biden laptop story, and equated parents to domestic terrorists believes it has the credibility to tell Americans what is true is laughable.”