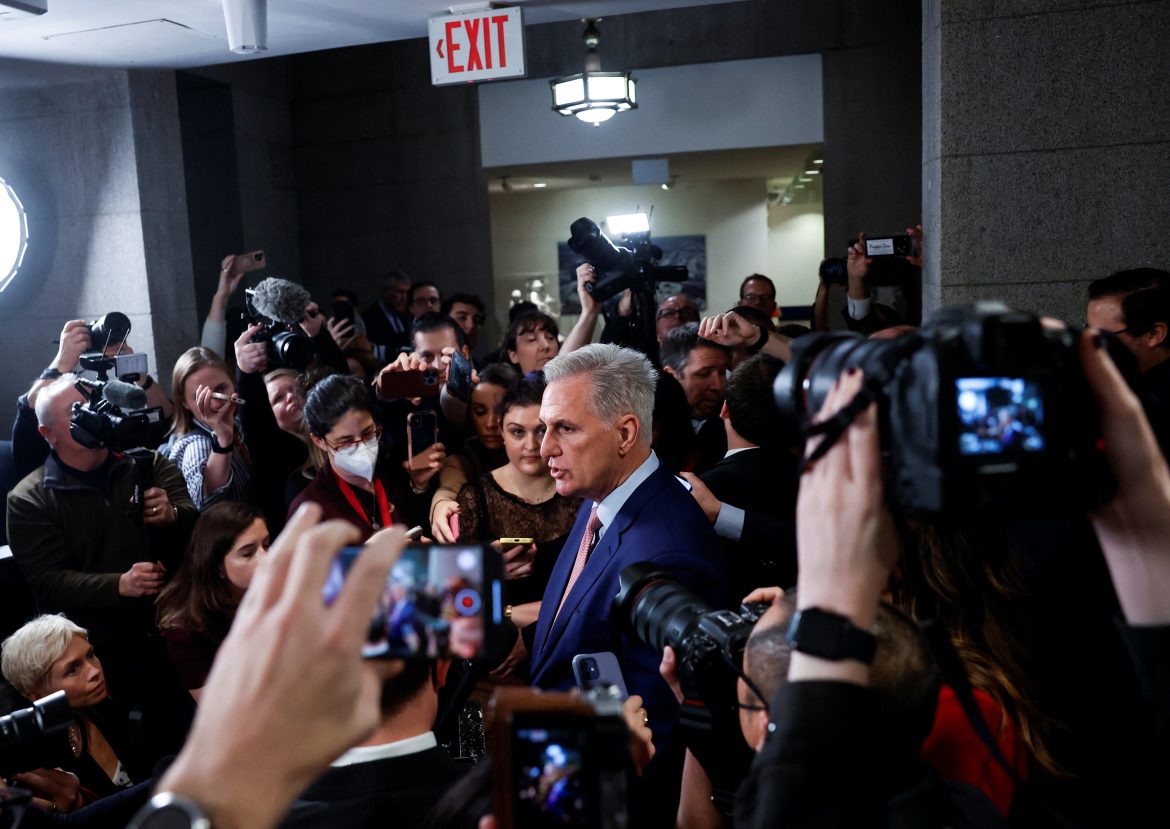 Republican House Leader Kevin McCarthy has indicated he will not be dissuaded by his failure to achieve the 218 votes necessary to become Speaker of the House.

McCarthy, who represents California, was thrice nominated for Speaker but never received the requisite votes.

As of the third vote of the day, he was 20 votes shy, and faring worse than Democrat House Leader Hakeem Jeffries in the vote tally,  but he has pledged to fight on.

“It’s not going to happen,” McCarthy said of potentially dropping out of the race.

The House adjourned Tuesday without a speaker, committee assignments, or rules for the coming Congress, and with numerous newly elected legislators still not sworn in.

As has been the case since Republicans learned they’d regained the House, the hold up is that many members of the Freedom Caucus refuse to support McCarthy as speaker.

“This isn’t about me,” CBS News quoted McCarthy as having said. “This is about the conference now because the members who are holding out … they want something for their personal selves.”

While it may be partially accurate, McCarthy’s statement lacks context. It’s been widely reported McCarthy is willing to allow the return of a rule that will allow any member of the House to call to vacate the speakership. However, Rep. Matt Gaetz (R-Fla.) told reporters that he and the other Republicans refusing to vote for McCarthy had demanded that he agrees to votes on term limits for legislators, a balanced budget, and a real plan to secure the U.S.-Mexico border. Gaetz said McCarthy refused to guarantee those votes.

Although overnight negotiations could change things, there is a real chance that Freedom Caucus hold-outs are in “anyone but McCarthy” mode.

The good news for McCarthy is that neither Rep. Andy Biggs (R-Ariz.) nor Rep. Jim Jordan (R-Ohio) gained any traction. Jordan, who says he does not want to be Speaker, has expressed support for McCarthy and nominated McCarthy in one vote.

“We need to rally around him,” Jordan said on the House floor. “I think Kevin McCarthy’s the right guy to lead us.”

Jordan’s words did not hold much sway over McCarthy’s most ardent detractors, who remain steadfast that Jordan would be a better speaker than McCarthy.

“Proud to stand with courageous conservative patriots who are placing country ahead of selfish interests,” Rep. Bob Goode of Virginia Tweeted. “This is what has been missing in Congress … defeat the Swamp … vote Jordan!”

Proud to stand with courageous conservative patriots who are placing country ahead of selfish interests. This is what has been missing in Congress…defeat the Swamp…vote Jordan!

Later in the day, Good tweeted, “The American people should matter more to our elected leaders than the Washington Establishment’s commitment to protecting personal interests. It’s past time to do better.”

Rep. Byron Donalds (R-Fla.) gained some attention Tuesday when he became the only Republican to switch his vote. After supporting McCarthy in the first two rounds, he swapped to Jordan in the third.

It was a signal from Donalds that McCarthy’s goal of wearing his detractors down was not likely to garner the results McCarthy wants.

“I think just if you’re going to ask members to vote over and over and over again to try to wear people down, I think it actually has the opposite effect,” Donalds said on Fox News. “My view has been for us to call a recess, get in a room, figure it out, have those conversations, and then go back to the floor.”

Donalds made a similar statement on Twitter. Later, Donalds added, “Unlike the DEMs, who do leadership by acclamation, the GOP is having a deliberative process of what leadership looks like in the House,” Donalds tweeted. “We know DC does not work. Having a deliberative discussion (it is messy at times) but in the long term, is in the nation’s best interests.”

ALL PARTIES DUG IN

Matt Gaetz also played a major role in Tuesday’s proceedings. First, he was seen on camera having a discussion with Rep. Alexandria Ocasio-Cortez (D-N.Y.).

The Intercept reports this discussion centered on Gaetz’s belief that McCarthy had struck a deal with Democrats to leave the chamber and lower the threshold McCarthy would need to gain the gavel.

“McCarthy was suggesting he could get Dems to walk away to lower his threshold,” Ocasio-Cortez told The Intercept. “And I fact-checked and said absolutely not.”

Later in the day, Gaetz sent a letter to the Architect of the Capitol suggesting that McCarthy had already moved into the Speaker’s office.

The Speaker of the House Office in the Capitol is currently being occupied by Kevin McCarthy.

Kevin McCarthy is not the Speaker of the House. He lost 3 consecutive votes today.

I’m demanding answers from the Architect of the Capitol. pic.twitter.com/AIZ8bFks6W

Lost in the juicier details of hard-line Republicans doggedly opposing McCarthy is the fact that McCarthy’s supporters are equally dug in on their position.

“We have to make a choice today: Are we going to be the party of the radical 2%? Because that’s what it comes down to,” NBC News quoted Rep. Kat Cammack (R-Fla.) as saying. “Kevin McCarthy will be the speaker of the House — and I don’t care if it’s the first ballot or the 97th ballot.”

Equally resolute was the balance of Democrats in the House, all of whom continued to vote for Jeffries throughout the day. At some points, Democrats chanted Jeffries’ names and at others, they chortled at Republicans’ inability to reach a consensus.

Tuesday marked the first time since 1923, exactly one century, since the House failed to elect a speaker. The House will reconvene today at noon.