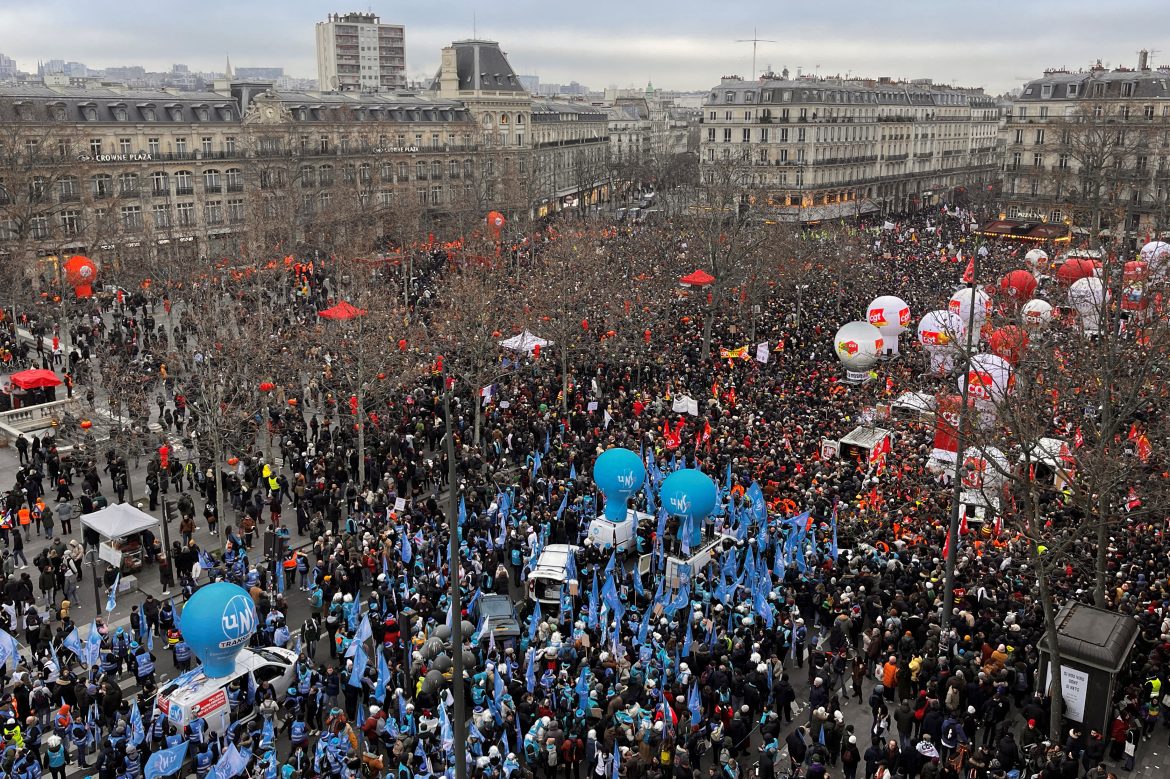 More than a million people took part in demonstrations across France on Thursday, halting trains and cutting electricity production, in protest against government plans to raise the retirement age by two years to 64.

The government said a total of 1.12 million people had taken part in the demonstration, including 80,000 at a march in Paris, which saw police clash briefly with some protesters.

The stoppages are a major test for President Emmanuel Macron, who said on Thursday that his pension reform plan, which opinion polls show is hugely unpopular, was “just and responsible” and had to be carried out.

“It’s salaries and pensions that must be increased, not the retirement age,” read one large banner carried by workers that opened the protest march in Tours, in western France.

“I’ll have to prepare my walking frame if the reform goes through,” said Isabelle, 53, a social worker, saying her job was too tough to add two more years.

The turnout was quite a large number, even by French standards, and more than the turnout at the first rally against previous pension reform in 2019.

The leader of the hardline CGT union, Philippe Martinez, said more than 2 million took part. It is common in France that police and union estimates vary widely. Either way, the turnout is a success for the unions, political analysts say.

Police briefly fired tear gas on the fringes of the Paris protest when black-clad, masked individuals in hoodies hurled projectiles at their lines. About 30 people were arrested, police said.

The government says the pension reform is vital to ensure the system does not go bust. Pushing back the retirement age by two years and extending the pay-in period would bring an additional 17.7 billion euros ($19.1 billion) in annual pension contributions, allowing the system to break even by 2027, according to Labour Ministry estimates.

Unions argue there are other ways to ensure the viability of the pension system such as taxing the super-rich or increasing employers’ contributions or those of well-off pensioners.

In Nice, in southern France, and elsewhere, banners read: “No to the reform.”

“This problem can be solved in a different way, through taxation. Workers should not have to pay for the public sector deficit,” said Laurent Berger, the leader of CFDT, France’s biggest labour union.

The challenge for the unions is to transform opposition to the reform – and anger over a cost-of-living crisis – into a mass social protest which could eventually force the government to change tack.

Union leaders, expected to announce more strikes and protests in the evening, said Thursday was just the beginning.

The pension reform still needs to go through parliament, where Macron has lost his absolute majority but is hoping to get it passed with the support of conservatives.

Train drivers, teachers and refinery workers were among those who walked off their jobs, as well as nearly 45% of staff at utility giant EDF, the company said. France Inter radio played music instead of its usual programming and bus drivers and civil servants also stopped work.

Only between one-in-three and one-in-five high-speed TGV lines were operating, with barely any local or regional trains running, the SNCF rail operator said.

In Paris, some metro stations were closed and traffic was seriously disrupted, with few trains running.

Restaurant worker Beverly Gahinet, who missed work because her train was cancelled, said she agreed with the strike even if she was not taking part.

But not all were so understanding.

“It’s always the same (people) who are on strike … and we have to endure it,” said real estate worker Virginie Pinto, as she struggled to find a metro to go to work.

A 2007 ban on wildcat walkouts and restrictions on strikes to guarantee minimum public services have limited unions’ ability to wear down governments’ reform ambitions.

The fact that working from home is much more common now since the pandemic could also have an impact.

The strike halted ferry crossings between Dover and Calais, a major sea route for trade between Britain and the continent.

Some seven out of 10 primary school teachers stopped work, and nearly as many in high schools, their unions said, though the Education Ministry gave much lower figures.

In Paris, students blockaded at least one high school in support of the strike action.

Shipments were blocked at TotalEnergies’ refineries in France, union and company officials said, but the company said one strike day would not disrupt refinery operations.

The impact on air traffic was largely limited to a reduction of about 20% of flights in Orly, Paris’ second-biggest airport.