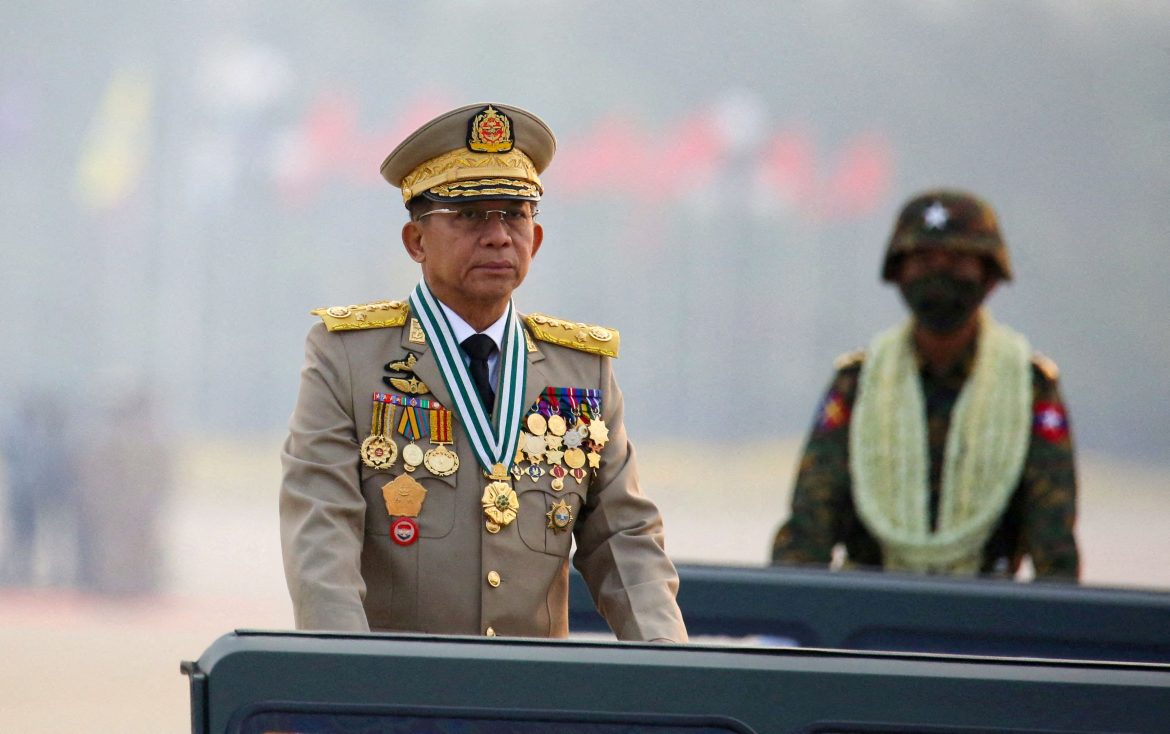 Myanmar‘s military government will release 7,012 prisoners under an amnesty to mark the country’s independence day, state broadcaster MRTV reported on Wednesday, as the junta chief praised some countries for maintaining support for his nation.

“I want to say thank you to some international and regional countries and organizations and individuals who positively cooperated with us … in the midst of all the pressure, criticisms and attacks,” Senior General Min Aung Hlaing said in a speech to mark Myanmar‘s 75th independence day.

“We are closely working with neighboring countries such as China, India, Thailand, Laos, and Bangladesh. We will work together for border stability and development,” Min Aung Hlaing said in a speech at a parade in the capital Naypyitaw, complete with flag-waving civil servants, marching soldiers, tanks, and a flypast by military jets.

Myanmar has been in chaos since the army took power from Suu Kyi’s government on Feb. 1, 2021, detaining her and other officials and responding to pro-democracy protests and dissent with brutal force, displacing hundreds of thousands of people.

While street protests are now rare after bloody crackdowns, the military is involved in almost daily clashes with minority ethnic forces and insecurity has spread to swathes of the country as members of a so-called People’s Defence Force have taken up arms to fight for a return to democracy.

Meanwhile, Suu Kyi was recently convicted of five counts of corruption and jailed for seven more years, wrapping up a marathon of trials condemned internationally as a sham designed to keep the junta’s biggest threat at bay amid widespread domestic resistance to its rule.

Suu Kyi is being held in a jail in Naypyitaw in solitary confinement and the military insist she has received due process by an independent court.

Authorities typically release some prisoners to mark the day when Myanmar declared independence from British rule.

MRTV said the latest amnesty would not include those convicted of murder and rape, or jailed for charges related to explosives, unlawful association, weapons, drugs, natural disaster management, and corruption.

It was not immediately clear if any political detainees would be freed.

The United States, the European Union, and countries such as Britain and Canada, have imposed sanctions on Myanmar‘s military and individuals deemed to have helped the junta come to power.

In a further rebuke, the U.N. Security Council last month adopted its first resolution on Myanmar in 74 years, demanding an end to violence and for the junta to free all political detainees.

Referring to international pressure, Min Aung Hlaing hit out at what he said were “disruptions from countries and organizations who want to intervene in Myanmar‘s internal affairs.”

Still, the junta has maintained some international support. The U.N. Security Council remains split over how to deal with the Myanmar crisis, with China and Russia arguing against strong action. They also abstained from last month’s vote on a resolution, along with India.

Thailand also hosted regional talks last month to discuss the crisis, including rare international appearances by junta ministers, even as several key members of the Association of Southeast Asian Nations, vocal in their criticism of the junta, did not attend.

ASEAN is leading diplomatic peace efforts and Myanmar‘s generals have been barred from the bloc’s high-profile gatherings for failing to honor promises to start talks with opponents linked to Suu Kyi’s ousted government.