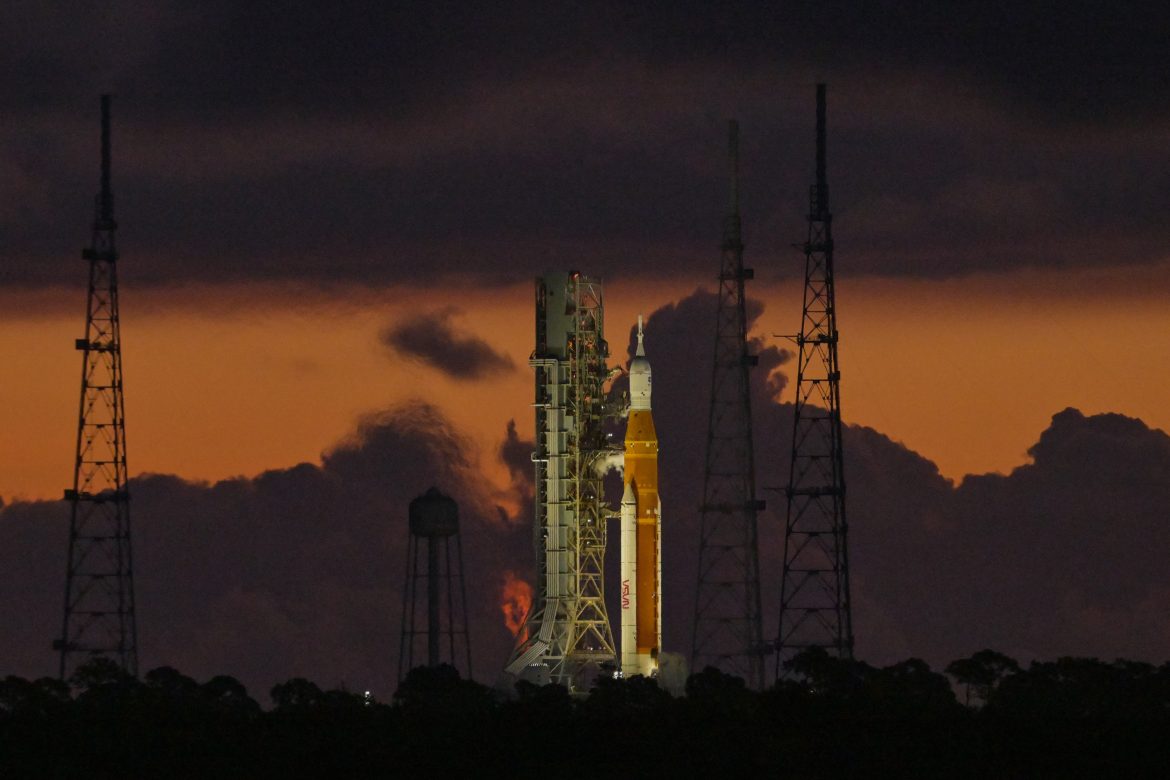 An engine-cooling problem forced NASA on Monday to postpone for at least four days the debut test launch of the colossal new rocketship it plans to use for future astronaut flights back to the moon, more than 50 years after Apollo’s last lunar mission.

The problem surfaced as fuel tanks of the Space Launch System (SLS) rocket were being filled with super-cooled liquid oxygen and hydrogen propellants, and launch teams began a “conditioning” process to chill the engines sufficiently for liftoff, NASA said.

But one of the four main engines failed to cool down as expected, prompting launch team managers to pause the countdown.

The launch was called off at 08:35 a.m. EDT, two minutes after the targeted launch time, as the 32-story-tall, rocket and its Orion capsule awaited liftoff from the Kennedy Space Center in Cape Canaveral, Florida.

The mission, dubbed Artemis I, calls for a six-week, uncrewed test flight of Orion around the moon and back to Earth for a splashdown in the Pacific.

NASA did not give a new launch date for the two-stage rocket but said its first available opportunity was Friday, Sept. 2.

Whether the agency sticks with that date depends on how quickly engineers can resolve the engine issue. The subsequent launch opportunity is Monday, Sept. 5.

Late-hour launch postponements are routine in the space business, and Monday’s was not an indication of a major setback for NASA or its primary contractors, Boeing Co for SLS and Lockheed Martin Corp for Orion.

“We don’t launch until it’s right,” NASA chief Bill Nelson said in a webcast interview just after the liftoff was scrubbed. “It’s just illustrative that this is a very complicated machine, a very complicated system, and all those things have to work. And you don’t want to light the candle until it’s ready to go.”

Still, the delay was a disappointment to thousands of spectators who had gathered on the shores around Cape Canaveral, with binoculars in hand.

Vice President Kamala Harris had just arrived at the space center, joining a throng of dignitaries and invited guests attending the event, shortly before the scrub was called.

The SLS-Orion rocket’s first journey will mark the kickoff of NASA‘s highly vaunted moon-to-Mars Artemis program, the successor to the Apollo lunar missions of the 1960s and ’70s.

The voyage is intended to put the 5.75-million-pound vehicle through its paces in a rigorous demonstration flight, pushing its design limits, before NASA deems it reliable enough to carry astronauts in a subsequent flight targeted for 2024.

Monday’s show-stopping technical snag was foreshadowed weeks ago during NASA‘s pre-launch “wet-dress rehearsal” tests of the SLS, when a problem with a hydrogen fuel line on the rocket forced engineers to forgo a full engine-conditioning test.

NASA officials ultimately decided to proceed to final launch preparations and to essentially defer the test they had been unable to perform until the actual countdown, acknowledging then that this strategy could end up forcing a liftoff delay, as occurred on Monday.

Five decades since humans last on the moon

Billed as the most powerful, complex rocket in the world, the SLS represents the biggest new vertical launch system the U.S. space agency has built since the Saturn V rocket flown during Apollo, which grew out of the U.S.-Soviet space race of the Cold War era.

If the first two Artemis missions succeed, NASA is aiming to land astronauts back on the moon, including the first woman to set foot on the lunar surface, as early as 2025, though many experts believe that time frame is likely to slip by a few years.

The last humans to walk on the moon were the two-man descent team of Apollo 17 in 1972, following in the footsteps of 10 other astronauts during five earlier missions beginning with Apollo 11 in 1969.

The Artemis program seeks to eventually establish a long-term lunar base as a stepping stone to even more ambitious astronaut voyages to Mars, a goal that NASA officials have said will probably take until at least the late 2030s to achieve.

The program was named for the goddess who was Apollo’s twin sister in ancient Greek mythology.

SLS has been under development for more than a decade, with years of delays and cost overruns. But the Artemis program also has generated tens of thousands of jobs and billions of dollars in commerce.

One issue cited by NASA officials last week as a potential show-stopper for Monday’s launch was any sign during rocket fueling that a newly repaired hydrogen line fitting had failed to hold. NASA officials said on Sunday they were also eyeing a potential, but minor, helium leak in launch pad equipment.

Although no humans will be aboard, Orion will be carrying a simulated crew of three – one male and two female mannequins – fitted with sensors to measure radiation levels and other stresses that real-life astronauts would experience.\