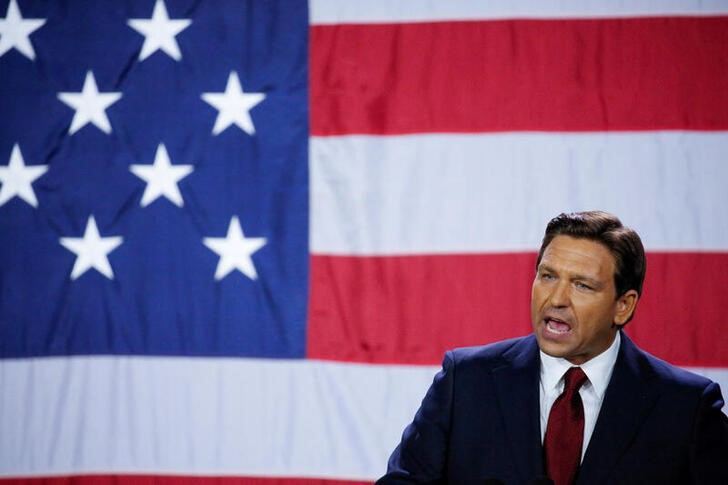 After winning reelection by a wide margin, Florida Gov. Ron DeSantis (R) is beginning to close the huge polling gap between himself and former President Donald Trump in a hypothetical 2024 Presidential primary, according to a new Harvard CAPS-Harris survey.

The poll asked GOP voters, “If the Republican presidential primary for the 2024 election was held today, who would you vote for?” While Trump received 46% of the vote to DeSantis’ 28%, those numbers represent an 11-point increase for DeSantis and a 9-point decrease for Trump.

“Month after month DeSantis has been rising and now he is cutting significantly into Trump,” said the co-director of the Harvard CAPS-Harris Poll Mark Penn. “If they both run, this will be quite a race and Trump could well lose.”

The new poll comes a week after Donald Trump announced that he is running for the Republican nomination for president in 2024. Since he burst onto the political scene in 2016, he has been the clear leader of the Republican party, but recently his leadership has been questioned.

Leading into the 2022 midterm elections, Republicans were expected to pick up a record number of seats in the House and potentially flip the Senate from Democrat to Republican control. Republicans did flip the House by a razor-thin margin but failed to take control of the Senate and — depending on what happens in a Georgia Senate runoff — may lose a seat in the Upper Chamber.

While there is blame to go around for the poor midterm performance, some of the highest-profile Republican candidates who lost were strongly endorsed and campaigned for by Trump. On the other hand, DeSantis went from a recount victory in 2018 to a 19-point win in 2022, and his strength in Florida translated up and down the ballot for Republicans in the state.

Tensions between DeSantis and Trump seem to be running high after the former President was instrumental in helping DeSantis become governor in 2018. Just days before the election, Trump gave DeSantis a nickname when he called him Ron “DeSanctimonious.” Trump has also called DeSantis an “average Republican governor” and derided him for being coy about his 2024 plans saying, “in terms of loyalty and class, that’s really not the right answer.”

The presidential election is still two years away, and just like anything else in politics, the polling will change. Much of what is being seen right now may be nothing more than a knee-jerk reaction to an election that did not go the way many in the GOP believed it would.

At the same time, the Trump camp should be worried about the direction that things are headed within the party. DeSantis has had staying power that not many other GOP presidential candidates have had since Trump entered the political scene.

The popularity and strength of the two most likely GOP presidential candidates are heading in opposite directions, and it will be interesting to see if that trend continues or if it is nothing more than a reaction to the midterms that will correct itself with time.

It is important to note that the same poll shows Donald Trump winning a hypothetical presidential race by two points over President Biden and seven points over Vice President Harris.