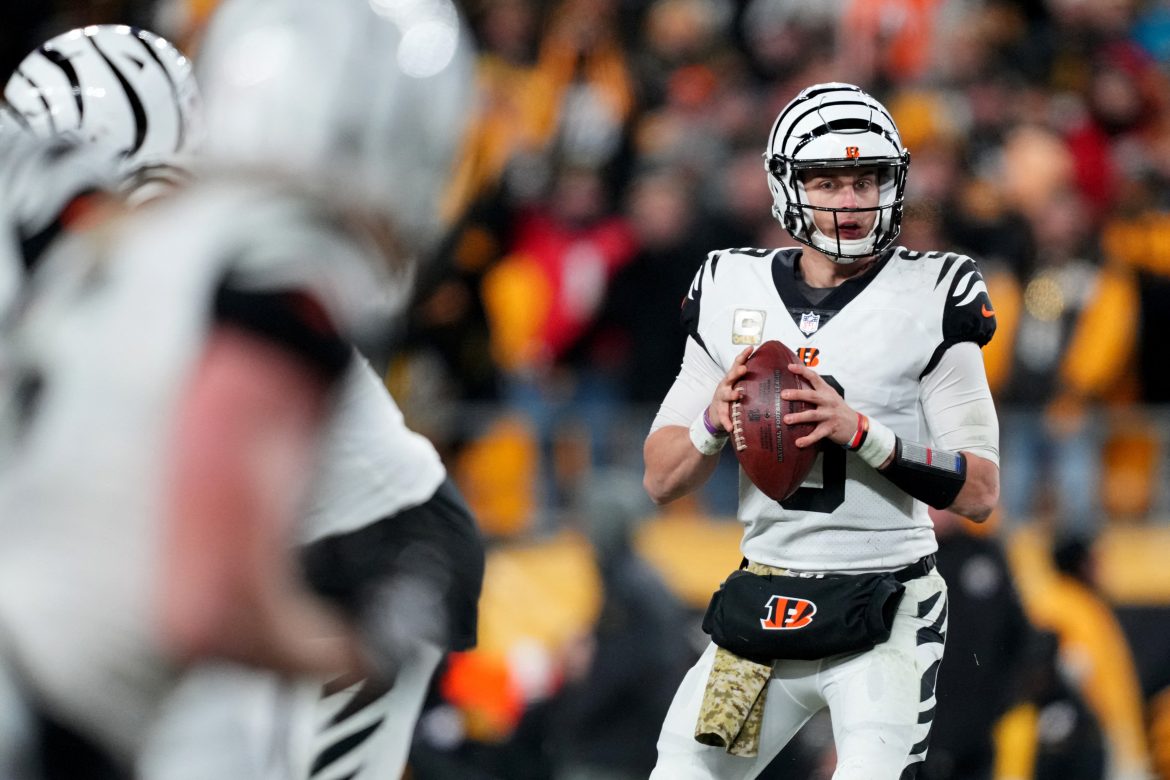 Tony Pollard had two touchdown catches for Dallas — including a 68-yard grab in the third quarter — and the Cowboys routed the Minnesota Vikings 40-3 on Sunday, earning the most one-sided road win in team history.

The Vikings had won seven in a row, including an impressive road victory at Buffalo last week. But Prescott, Pollard, and Ezekiel Elliott were unstoppable and Parsons wreaked havoc on Vikings quarterback Kirk Cousins.

Pollard finished with a career-high 189 yards of offense. Elliott rushed for two scores in his return from injury and the Cowboys (7-3) didn’t punt until their eighth possession.

Parsons and Dorance Armstrong each had two sacks on Cousins. It was the fifth-largest loss ever for the Vikings (8-2).

In Pittsburgh, Pa., Joe Burrow threw four TDs passes, including three to backup running back Samaje Perine, and the Cincinnati Bengals rallied from a halftime deficit to beat the Pittsburgh Steelers 37-30. The reigning AFC champion Bengals (6-4) have won four of their last five games. Rookie Kenny Pickett passed for 265 yards and a touchdown for the Steelers (3-7).

In Baltimore, Md., Lamar Jackson ran for a 1-yard touchdown in the fourth quarter, Justin Tucker kicked two field goals and the Baltimore Ravens beat the Carolina Panthers 13-3. The Ravens (7-3) forced three turnovers in the fourth quarter to seal the win. Baker Mayfield returned to the starting lineup for the Panthers (3-8) and threw for 196 yards.

In Foxborough, Mass., the New England Patriots beat the New York Jets 10-3 when Marcus Jones returned a punt 84 yards for a touchdown with 5 seconds remaining. The Patriots (6-4) have won three straight games and 14 in a row against the Jets (6-4). Jones’ score was the first TD on a punt return this season in the NFL. The Jets sacked Patriots QB Mac Jones six times but they only gained 103 yards of total offense

In Detroit, Mich., Josh Allen led the snowed-out Bills to a 31-23 win over the Cleveland Browns. A major snowstorm in western New York forced the NFL to move the game from Buffalo to Detroit. Jacoby Brissett threw three TDs for the Browns (3-7). Allen didn’t turn the ball over for the Bills (7-3) after six interceptions over the previous three games.

In Indianapolis, Ind., Jalen Hurts ran in from the 8 with 1:20 remaining in the game to lead the Philadelphia Eagles to a 17-16 comeback win over the Indianapolis Colts.

The Eagles (9-1) trailed 13-3 entering the fourth quarter but the Colts (4-6-1) missed several opportunities to extend their lead and Hurts led Philadelphia back with his legs. He ran 16 times for 86 yards and also tossed a TD pass.

The Lions (4-6) shut down NFL leading rusher Saquon Barkley and forced the Giants (7-3) to turn the ball over three times. Giants QB Daniel Jones had 341 yards passing but two picks.

In Denver, Col., Derek Carr threw a 35-yard touchdown pass to Davante Adams on the third play of overtime to lift the Las Vegas Raiders to a 22-16 win over the Denver Broncos.

In Atlanta, Ga., Younghoe Koo kicked a 53-yard field goal with 1:47 remaining to give the Atlanta Falcons a 27-24 win over the Chicago Bears. Marcus Mariota had a TD pass and TD run for the Falcons (5-6). Justin Fields ran 85 yards and a score, but the Bears (3-8) suffered their fourth straight game.

Atlanta’s Cordarrelle Patterson set the NFL record with his ninth career kickoff return for a TD. He ran one back 103 yards in the second quarter, breaking a tie with Joshua Cribbs and Leon Washington.

In New Orleans, La., Andy Dalton tossed three TD passes and the New Orleans Saints beat the Los Angeles Rams 27-20. Rams QB Matthew Stafford left the game to be evaluated for a concussion in the second half, two days after he was cleared to return from the NFL’s concussion protocol. The defending Super Bowl champion Rams (3-7) have lost four straight.

In Houston, Tex., Kendall Fuller returned an interception for a touchdown, and the Washington Commanders breezed past the Houston Texans 23-10. Taylor Heinicke improved to 4-1 starting for the injured Carson Wentz and the Commanders are 6-5. The Texans (1-8-1) have the worst record in the NFL.

In Los Angeles, Calif., Patrick Mahomes threw a 17-yard TD pass to Travis Kelce in the final minute to lead the Kansas City Chiefs to a 30-27 comeback victory over the Los Angeles Chargers. Kelce caught three TD passes to help the Chiefs (8-2) take a three-game lead over the Chargers (5-5) in the AFC West.

The San Francisco 49ers (5-4) will travel to the Arizona Cardinals (4-6) for an NFC West showdown tonight on Monday Night Football. Kickoff is set for 8:15 EST.