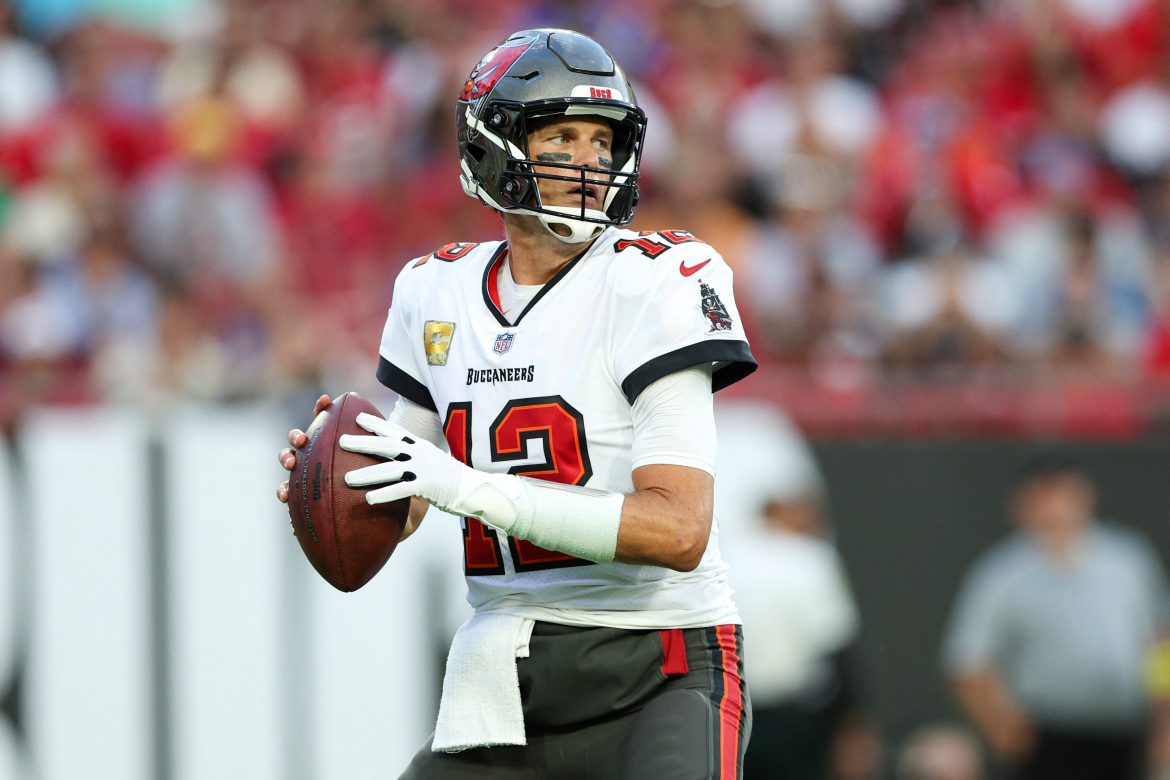 Tom Brady pumped his fist, waved to the fans, and ran off the field with a smile for the first time in a month.

Desperate for a win, the greatest quarterback in NFL history turned in a vintage performance. Facing a fourth-straight loss for only the second time in his storied 23-year-career, Brady led the Tampa Bay Buccaneers to an improbable victory.

Brady needed just 35 seconds with no time-outs to drive the Buccaneers 60 yards on six plays in the final minute. He tossed a 1-yard touchdown pass to rookie Cade Otton with 9 seconds remaining to lift Tampa over the Los Angeles Rams 16-13 on Sunday.

“Yeah, that was pretty awesome,” Brady said. “That’s why we play — to get out there and win and give it all you got. It was great to see.”

The 45-year-old Brady, a seven-time Super Bowl champion, was off to the worst start of his career. The victory over the defending Super Bowl champion Rams lifted the Buccaneers back into first place in the NFC South. Brady achieved another milestone in the game, becoming the first player ever to surpass 100,000 career yards passing.

“We always have a chance with him. We’re grateful to have him,” Buccaneers coach Todd Bowles said. “He got over 100,000 yards — that’s a long playing career for anybody. He still plays at a high level. We love the guy to death.”

Aaron Rodgers tied a career-high with three interceptions, including two in the end zone, and the Green Bay Packers lost their fifth straight game, 15-9 to the Detroit Lions.

Patrick Mahomes rallied the Kansas City Chiefs to a 20-17 victory in overtime over the Tennessee Titans. Mahomes ran for the tying touchdown and 2-point conversion late in the fourth quarter and finished with 446 yards passing.

PATRICK MAHOMES DOING IT ALL ON HIS OWN ‼️

Tua Tagovailoa threw three touchdown passes, Tyreek Hill had 143 yards receiving and the Miami Dolphins beat the Chicago Bears 35-32. Bears quarterback Justin Fields ran for 178 yards, the most by an NFL quarterback in a regular-season game, and became the first player since at least 1950 with at least 150 yards rushing and three TD passes in a game.

Justin Fields are you kidding me 😱 pic.twitter.com/ARUIlVawNd

Kirk Cousins threw two touchdown passes and the Minnesota Vikings came back to defeat the Washington Commanders 20-17. Harrison Smith picked off Taylor Heinicke to set up the tying score as the Vikings won their sixth straight game.

Cameron Dicker kicked a 37-yard field goal to lift the Los Angeles Chargers over the Atlanta Falcons 20-17. Dicker made a winning kick earlier in the season for the Philadelphia Eagles.

Joe Mixon rushed for 153 yards and scored five touchdowns as the Cincinnati Bengals built a 35-0 halftime lead on the way to a 42-21 rout over the Carolina Panthers. Mixon scored four times on runs and one pass from Joe Burrow.

Joe Mixon is having a day. 😤

This was his fourth touchdown of the first half to go with 113 rushing yards and four catches for 58 receiving yards.#OUDNA | #BoomerSooner pic.twitter.com/cRSSf2WSHU

Travis Etienne ran for two touchdowns and Jacksonville rallied from a 17-point deficit to beat Las Vegas 27-20. It was the second-biggest comeback in franchise history for the Jaguars. The Raiders led 17-0 early in the second quarter.

The New England Patriots had nine sacks in a dominant defensive effort against the Indianapolis Colts in a 26-3 victory. Linebackers Matt Judon and Josh Uche each had three sacks, and the Patriots held Indianapolis to 121 yards and 0-of-14 on third down.

North Korea says launches were simulated attack on South and US