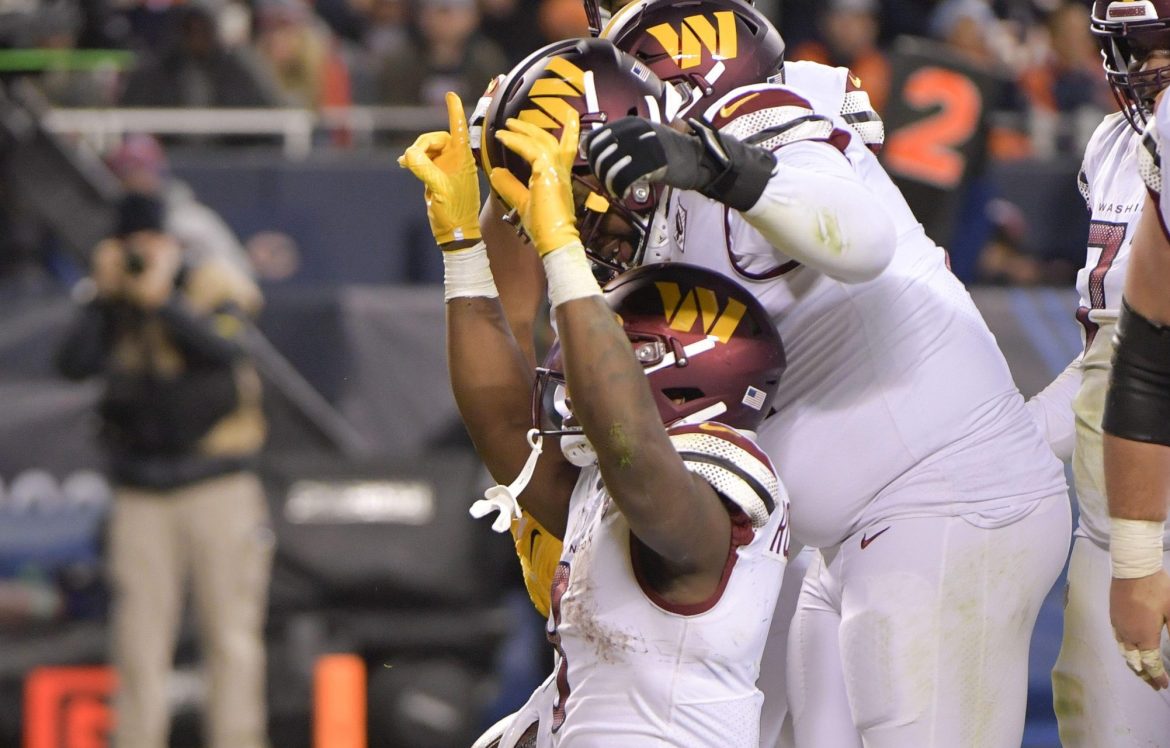 The Washington Commanders put aside the franchise’s off-field turmoil and handed the Philadelphia Eagles their first loss of the season on Monday night.

Taylor Heinicke threw for 211 yards, rookie Brian Robinson ran for 86 yards and one of the most impressive one-yard touchdowns of the season, and the Commanders beat the Eagles 32-21 on the road Monday night.

Brian Robinson doing everything he can! Touchdown Commanders! pic.twitter.com/c7SVkfRElT

The Eagles were off to a franchise-best 8-0 start and only committed three turnovers in the first eight games before a sloppy performance against Washington that included three fumbles and one interception.

Jalen Hurts, who had an MVP-caliber first half of the season, had 175 yards passing, two touchdowns, and his third pick of the season. The Eagles ran for only 94 yards and had the ball for just 19:36 as Washington dominated time of possession, keeping Philadelphia’s high-powered offense off the field.

“They did an excellent job on offense and executed at a high level,” Hurts said of the Commanders.

We turned the ball over. We were not efficient enough. Nothing was enough. There is a lot of reflection being held right now and I think it is an opportunity for us to grow. That is the same message. I think there have been games in the past where you would hear us say leaving money on the table, opportunities that we didn’t take advantage of. I look at this game and we were repeat offenders of that and it got us. It’s something we have to learn from. It is something we already know and it is something we have to fix and control the things we can in the end when we are out on the field.

The Eagles were the last undefeated team in the NFL this season. The 1972 Miami Dolphins were the only perfect team in league history, going 17-0.

The Commanders improved to 5-5 with their fourth win in the last five games. They’re 3-1 with Heinicke, who took over as the starting quarterback when Carson Wentz injured his finger.

It’s been a tumultuous season for Washington’s franchise as owner Dan Snyder and the organization are the subjects of multiple ongoing investigations, including by the attorney general of Virginia, Congress, and the NFL. Snyder was sued by the District of Columbia last week.

Commanders coach Ron Rivera challenged his team to focus on what they can control. They did that in Philadelphia, overcoming a hostile environment in the biggest upset of the season.

Terry McLaurin had eight catches for 128 yards and Antonio Gibson also scored on a 1-yard run for the Commanders.

Heinicke prevented the Eagles from getting an opportunity for a final drive trailing 26-21 when he ran around in the backfield and took a knee on third down only to get tackled by Brandon Graham for a roughing penalty. That gave Washington a first down and allowed the offense to run the clock down.

The Eagles had one final desperation play from their 10, but the Commanders picked up a loose ball after a failed lateral for a TD.

Commanders win by Double-Digits because they get a touchdown on the very last play of the game 😂 #Commanders #Eagles pic.twitter.com/rejwdT9Eha

“It’s probably the biggest win of my career,” Heinicke said. “It’s a division opponent, undefeated at their place, Monday night. It can’t get much better than that.”

Now, Rivera has to decide between Heinicke and Wentz, who is scheduled to return from the injury.

“Whatever decision they want to make, let’s go,” he said. “If I’m backing up Carson next week, great. I’m going to help him any way I can to get ready for the Texans game.”