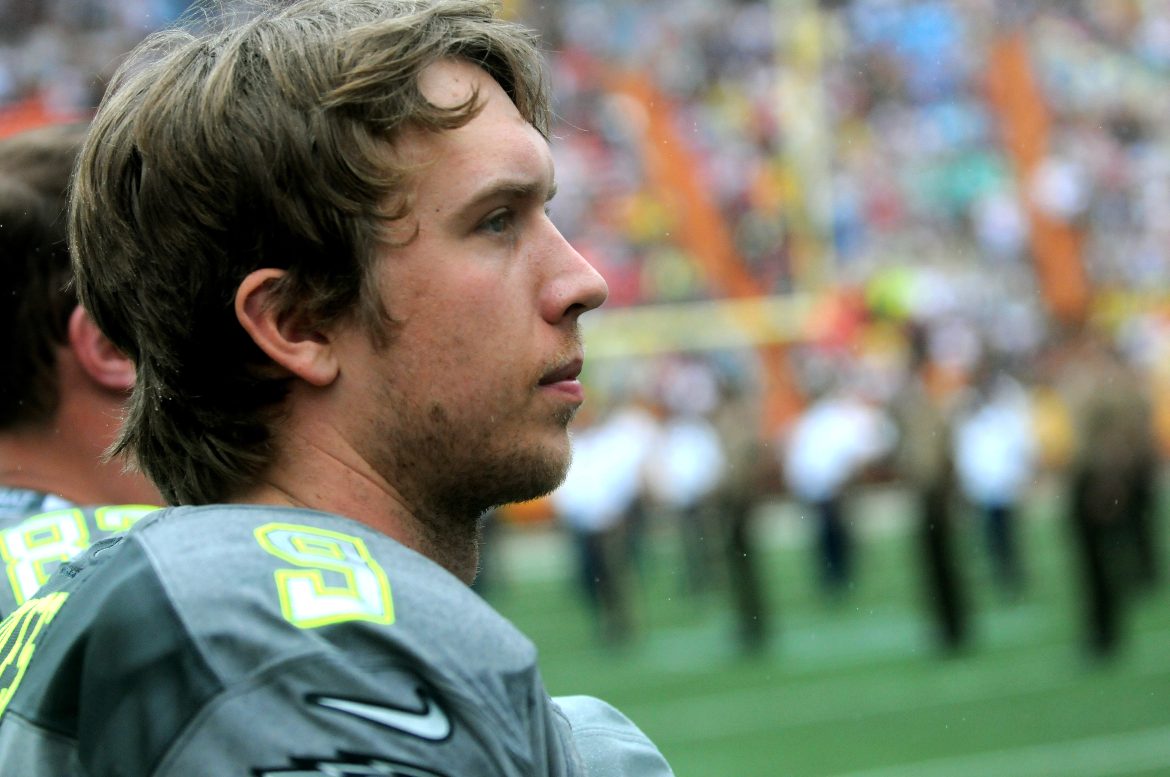 Nick Foles has experienced plenty of ups and downs throughout his NFL career.

He was a Super Bowl MVP, a Pro Bowl MVP, a backup, and a third-string quarterback. He’s been released, traded, and even contemplated retirement at one point.

His opportunity to jump-start the struggling Indianapolis Colts’ offense didn’t go well Monday night. Foles had one of his worst games in his 11 seasons in the league. He threw three interceptions, the Colts didn’t convert any third downs, and they lost to the Los Angeles Chargers 20-3 in front of a national television audience.

But Foles maintained a strong perspective.

“No matter what you can always be there with guys in the locker room and talk about life, what’s going on outside the locker room, kids, significant others, whatever it may be,” Foles said.

I think that’s the part that sometimes gets lost with all the fantasy football. They’re human beings. … We have an opportunity to be role models up here. That’s why we do it, too, because there are a lot of kids who look at us and want to do this and we want to set an example. That’s why I keep playing. That’s why the young guys in the locker room you share wisdom with and help them along the way. You learn a lot through the tough times. When you win, it’s easy. It’s super easy. When you lose, it’s hard. When you lose a lot, it becomes very difficult. But you learn what’s deep down in your soul and that’s the positive.

The 33-year-old Foles was a third-round pick by the Philadelphia Eagles in 2012. He had the best season of his career in 2013, setting a then-NFL record for best touchdown/interception ratio when he threw 27 TDs and only two picks. Foles led the Eagles to an NFC East title that season and offensive MVP of the Pro Bowl.

He was traded to the Rams in 2015, though, had a poor season, and considered retirement after he asked the team to release him. He ended up going to Kansas City and reuniting with Andy Reid, who drafted him in Philadelphia in 2012. After one season with the Chiefs, Foles returned to the Eagles to back up Carson Wentz in 2017.

After Wentz was injured in December of that season, Foles stepped in and led the Eagles to the franchise’s only Super Bowl championship. He outplayed Tom Brady in a 41-33 win over the New England Patriots and became a folk hero in Philadelphia.

Foles again filled in when Wentz was injured in 2018 and led the Eagles to a playoff berth and one win in the postseason.

He has played for Jacksonville, Chicago, and now Indianapolis since his second stint with the Eagles.

Foles has always leaned on his Christian faith to help him throughout his journey.

“Right when I felt this thing break, that’s when I went into the locker room and I realized, ‘God, this wasn’t exactly what I was thinking,'” Foles said after he broke his collar bone throwing a TD pass in his first game with the Jaguars. “‘Obviously, you get here and you want to create a culture and impact people. But at the end of the day, if this is the journey you want me to go on, I’m going to glorify you in every action, good or bad.’ I still could have joy in an injury. People hear that and say that’s crazy, but when you believe in Jesus. You go out there and you play, that changes your heart.”

“Just like when I hoisted the Lombardi Trophy, the reason I’m smiling, my faith was in Christ. In that moment, I realized I didn’t need that trophy to define who I was because it was already in Christ. That’s my message when I played. Same thing happens when I get injured. We tend to make this so much about us as human beings. It’s not about us. If you make it about yourself, you’re probably going to go home at night and lay your head on your pillow and be very alone and very sad.”

Despite Foles’ poor performance against the Chargers, Colts coach Jeff Saturday plans to start him next week.

“The biggest thing is you can be fighting every single down and lose a game like we did. But I’ve also been on some teams where we fought and we win,” Foles said. “So, it’s just a unique game. That’s why we keep playing. It’s hard. It’s a very difficult game. But you learn a lot about yourself and the people you play with.”