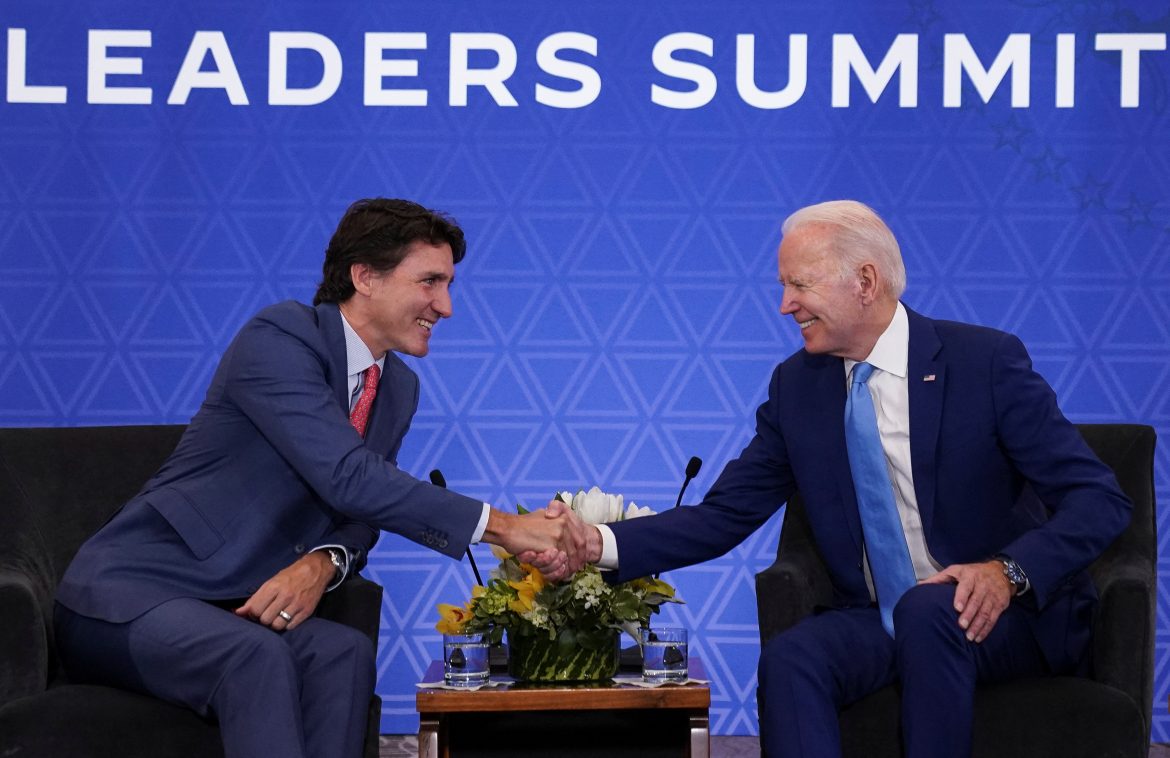 The meeting among the leaders of the United States, Mexico, and Canada didn’t begin with much harmony, but it concluded with the three nations making a joint statement about how the three would address the challenges the nations collectively face.

Late Tuesday, the White House released the text of the Declaration of North America, a document that touches on all manner of topics near and dear to U.S. President Joe Biden, Mexican President Andrés Manuel López Obrador, and Canadian Prime Minister Justin Trudeau.

LEFTIST DEI TOP PRIORITY
Given the political inclinations of the men involved, it is unsurprising that diversity, equity, and inclusion got top billing.

“Diversity, equity, and inclusion is foundational to the strength, vibrancy, and resilience of our countries,” the document reads. “We focus on providing marginalized communities opportunities for their full, equal, and meaningful participation in our democracies and economies.”

Second on the list of tri-national imperatives was climate change and environmental issues, which the trio said they’d address in numerous ways, none of which are likely to be welcomed by conservatives.

“This includes achieving our respective 2030 nationally determined contributions under the Paris Agreement, and working together and with other countries to keep a 1.5-degree C temperature limit within reach,” the declaration reads. “To promote buy-in for ambitious cuts to emissions, we will come together to align approaches on estimating the social cost of greenhouse gas emissions.”

Biden and company took a hard line on methane emissions, which they plan to reduce significantly “from all sources, with a new focus on waste methane,” and to clean energy initiatives.

The remaining focal points of the declaration were, in descending order, competitiveness, migration and development, health, and regional security.

On migration, the leaders promised to continue adhering to the Los Angeles Declaration, which was created last year.

“Since June, Mexico, the United States, and Canada have collectively welcomed record numbers of migrants and refugees from the Western Hemisphere under new and expanded labor and humanitarian programs,” the document reads. “Today, we affirm our joint commitment to safe, orderly, and humane migration under the Los Angeles Declaration and other relevant multilateral frameworks.”

Concurrently, the Biden administration announced numerous measures that the president no doubt desperately hopes will stem the number of migrants arriving at the southern border.

As first reported by The Hill, this includes creating a website that will give migrants easier access to legal pathways to entry. The administration also pledged to work to improve cooperation among the U.S., Canada, and Mexico to combat human trafficking.

The effort has thus far been lampooned by conservatives.

“A new website to curb the crisis at the southern border? “Rep. Jim Jordan (R-Ohio) tweeted. “That will fix everything, @JoeBiden. Maybe another photo-op would help as well.”

A new website to curb the crisis at the southern border?

That will fix everything, @JoeBiden!

Maybe another photo-op would help as well.https://t.co/pomPcGigGl

For Biden, Tuesday was the culmination of a multiyear effort to ingratiate himself and the United States with Canada and Mexico. Former President Donald Trump had not participated in trilateral talks with the other two North American nations during his presidency.

The meetings did not get off to a glowing start. Monday, López Obrador accused Biden and the U.S. of treating Latin America and the Caribbean with abandonment, disdain, and forgetfulness.

López Obrador, who has in the past stated his admiration of Trump, made headlines last year when he refused to attend the Los Angeles meeting last June because Biden did not invite the leaders of Nicaraugua, Cuba, and Venezuela.