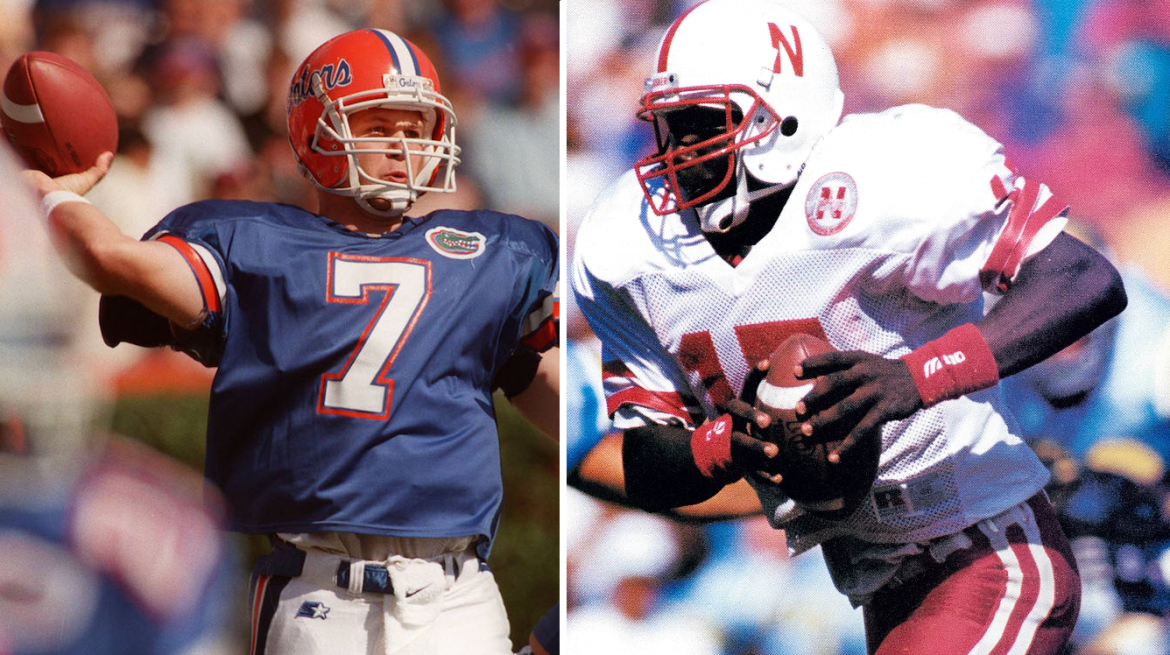 The College Football National Championship game will be played on Monday January 9, and with so many changes going on in the sport, today is a great chance to look back at some of the great college quarterbacks over the past 40 years.

The list of top five national championship-winning college quarterbacks is subjective, but there are some qualifications that most people would agree on. The first is the player cannot be a one-year wonder like Cam Newton in 2010. There has to be some longevity and everyone on the list will have started for their team for at least two years.

A Heisman Trophy is not a prerequisite for making the top five, but it certainly does not hurt. Most of the time, if you are a good starting quarterback for a national championship team, you will at least get invited to the Heisman ceremony.

If you were the starting quarterback for two national championship-winning teams, even if your other accomplishments are not up to par, you will at least be considered for this list.

As this article is being written, UGA quarterback and former walk-on Stetson Bennett will be leading his Georgia Bulldogs into the college football playoffs for the second year in a row. Bennett enters the playoffs with a record of 25-1 over the past two seasons and one national championship. If he wins another one this year, he would definitely get consideration for this list as well.

The following five quarterbacks are my picks for the top five ever to win a CFB national championship.

With a BCS national championship in 2004, a runner-up in 2005, and arguably deserving of a BCS birth in 2003, a year in which his USC Trojans finished No. 1 in the AP Poll, Leinart was a great college quarterback. In fact, in three seasons as a starter for USC, Leinart’s record was 37-2 and his two losses were a triple overtime loss to Cal and a loss in the National Championship game where Vince Young had one of the most memorable performances in college football history. Leinart also won the Heisman in 2004 and came in the top six two other times.

Danny Wuerffel and his coach Steve Spurrier revolutionized the game of college football. The precision, timing, and intelligence it took to run that offense was incredible and he remains one of the greatest to ever play. Wuerffel won the Heisman in 1996, came in third the year before, and shattered passing records that still stand. Wuerffel’s Florida Gators won the Sugar Bowl against Florida State 52-20 to give Wuerffel and Spurrier their elusive national title.

Tim Tebow may be the most popular athlete to have ever played college football. Now, 15 years after winning a Heisman, Tebow is almost as popular as he was back then and he has not played competitive football for 10 years. He officially has two national championships to his name, but he was the backup to Chris Leake as a freshman, so he only has one as a starter.

He won the Heisman in 2007, finished in the top five two other times, and ranks third in FBS history in quarterback efficiency. At Florida, Tebow was 6’3, 245 pounds and he was fast. He may be the best ever in short-yardage situations because he could beat you with his arm, beat you with his speed, and if neither of those worked he would just lower his head and run over you.

Charlie Ward is one of the best leaders and one of the best natural athletes to ever play the position. If he was playing college football right now, he would probably be a No. 1 overall pick in the draft, but in the mid-1990s, he was considered too short by most NFL scouts at a listed 6’2″. Instead of retiring or moving to the booth, however, Charlie Ward played more than 10 years in the NBA as a point guard. Ward was 23-2 in two seasons as a starter, won a national championship and the Heisman in 1993, and remains one of the most accurate passers in Florida State history. Ward could do it with his arm and legs, but it was his leadership and drive that took Florida State to the national championship.

Tommie Frazier was one of the best, if not the best, option quarterbacks to ever play the game. He does not have the huge passing statistics that other guys on this list do, but he does have two national championships, a 45-4 record as a starter, and nearly 2,000 career rushing yards. Frazier also lost a national championship to Charlie Ward and Florida State in 1993 when a 45-yard field goal by Nebraska, with one second left in the game, sailed wide right and FSU won 18-16.

Frazier never won a Heisman, but that does not mean he did not deserve one. He was one of the most electrifying players to ever play the game and had some of the most memorable runs ever. He ran the option at Nebraska as well as anyone ever has and he deserves his spot as the best quarterback in college football to win a national championship.