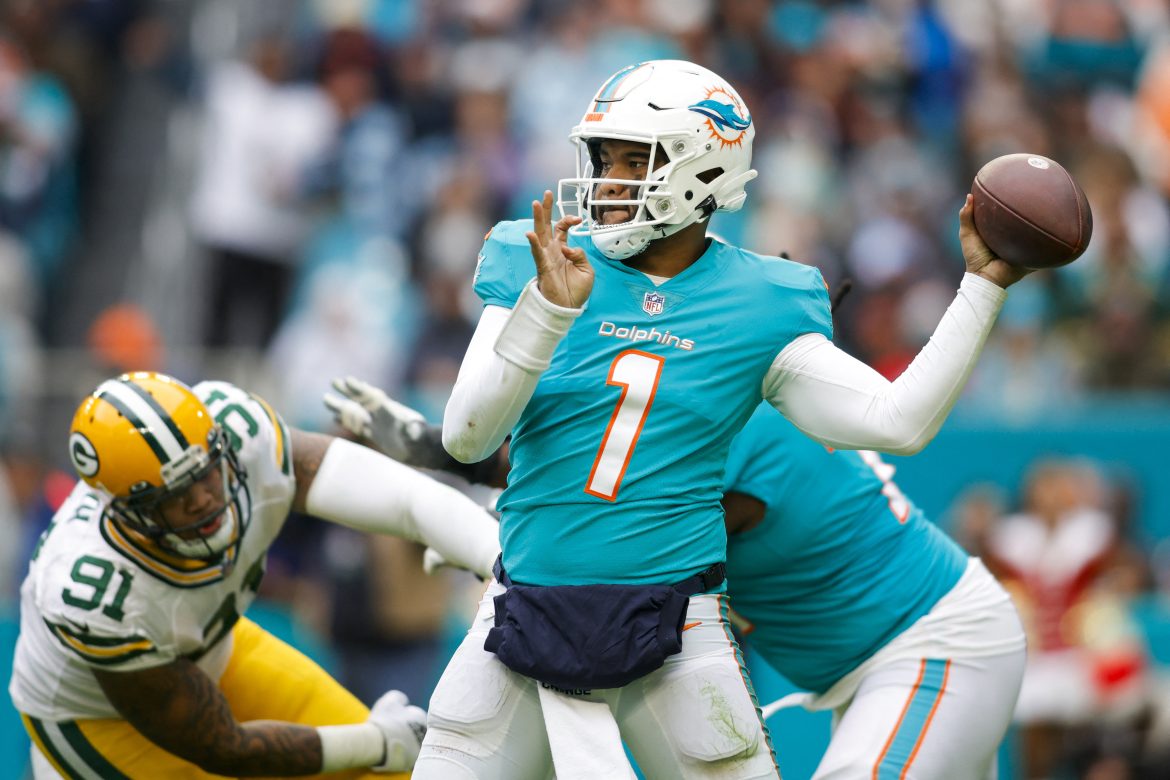 When Miami Dolphins quarterback Tua Tagovailoa’s head hit the turf on Sept. 29, the signs were clear: he needs to step away from football for a while, a long while.

Yet here we are three months later and he is in concussion protocol again.

The injury in the September game against the Bengals was the young star’s second hard hit to the head in four days. As he lay on the ground, he raised his hands, fingers contorted into shapes that made no sense outside of a serious brain injury. Neurologist and concussion expert Chris Nowinski later told reporters that Tagovailoa showed signs of “decorticate posturing,” a severe, “primitive” brain response that indicated damage to the cortex.

Just four days earlier, in a Sunday game against the Buffalo Bills, Tagovailoa had suffered a similar slam to the ground, his head hitting the turf with major force as his neck snapped back. He got up from that hit, only to walk a few steps on wobbly legs before stumbling to the ground.

Bounced head off the Carpet..

He was allowed to reenter that game against the Bills. Four days later, he played against the Bengals until the second hit to his head took him out of the game on a stretcher.

Seemingly against all common sense in 2022, when we know much more about the serious effects of concussions than we did 20 years ago, Tua missed just two games while in “concussion protocol” before returning to play against the Pittsburgh Steelers on Oct. 23.

And all seemed OK for the better part of two months. The Dolphins won five straight games before hitting a tough December schedule that now has them on a four-game losing streak.

Then Christmas Day changed everything. Once again, the back of Tagovailoa’s head slammed into the turf as he was tackled.

Here's the play where Tua Tagovailoa's head hit the ground from Sunday night's game vs. the Packers:pic.twitter.com/c7G5zExov8

And once again, he was allowed to go back into the game.

NOT THE SAME TUA

This time the signs of head injury weren’t as obvious to the casual fan. His legs weren’t wobbly and his fingers didn’t look like they were auditioning for a contortionist act at the carnival. But to those who’ve followed his career since he was a sophomore phenom lighting up the SEC at Alabama, the signs were clear that this was not the Tua we all know.

Tagovailoa has made a career of playing astonishingly efficient, mistake-free football. In 32 college games, Tagovailoa threw just 11 interceptions in 684 pass attempts (one per 62.18 attempts). As a pro, he’d only thrown 20 picks prior to last Sunday in 1,053 attempts. That’s an average of just one interception per 52.65 attempts in the NFL, rivaling Tom Brady for fifth-best in NFL history.

After the smack to the turf on Sunday, Tagovailoa threw three interceptions in the fourth quarter in a span of just nine attempts. All three interceptions were clear mental mistakes, as he threw the ball into tight, nearly unbeatable coverage while other receivers were wide-open.

These were mistakes that Tagovailoa simply never made with an uninjured brain. The only other time he’d thrown three interceptions in a game — in college or the NFL — was the final game of his rookie season in 2021, when he threw three to the Bills. In that game, he threw a whopping 58 pass attempts as his team tried to battle from way behind.

It should have been obvious after the first hit against the Bills way back in September that Tua shouldn’t have been allowed back in the game. It was even more obvious four days later that he and his doctors should take an extended period to evaluate his brain before he played football again.

And yet, none of that happened. Football — and the Dolphins’ chances of winning games — were clearly put before the young man’s health. What happened last Sunday very well may have put his life on the line.

Now, a growing number of sensible people are talking about whether or not Tua should retire from the game of football. Hall of Fame defensive back Charles Woodson is one of them.

Just seeing the news about tua.. if indeed it’s another concussion he has think long and hard about continuing to play this game ever again.. period

The sad thing is, whether or not Tua can “think long and hard” in the capacity he once could is highly questionable. He certainly couldn’t think quickly in the pocket on Sunday as he has for years.

That is why something has to change at the league level. It can’t be left up to individual players, who have been taught to put their team first and are suffering from brain injuries. And it can’t be left to teams, which invest tens of millions of dollars in star players in order to win games.

THE NFL HAS TO CHANGE

The NFL has done a lot of posturing in recent years when it comes to concussions. They have instituted “protocols” and claim that they are looking out for players’ well-being. All this after hiding the long-term effects of concussions and head injuries for years, until the stories about Chronic Traumatic Encephalopathy (CTE) in former players became far too prevalent to hide any longer.

Now, with what is happening to one of the league’s brightest young stars, the borderline criminal deficiencies in the NFL and the Miami Dolphins’ handling of player concussions are once again too obvious to ignore. The most popular sport in America must change how it treats head injuries and how it takes care of players.

I’m not a medical professional or a concussion expert, but I know firsthand that these conditions are serious, even life-altering. I have suffered a concussion, and my father is showing signs of CTE after multiple concussions in his life. For many, the long-term effects have been fatal, as the effects of CTE have led many, including NFL Hall of Fame Junior Seau, to suicide.

The NFL has to reevaluate the concussion protocol, with emphasis on player health and long-term effects and evaluation. The opinions of brain injury experts who are not paid by the NFL or any team should be highly valued in any new rules.

The players’ safety must be put first, and instances like what is happening to Tua right now should never happen again. Football isn’t worth anyone’s life.