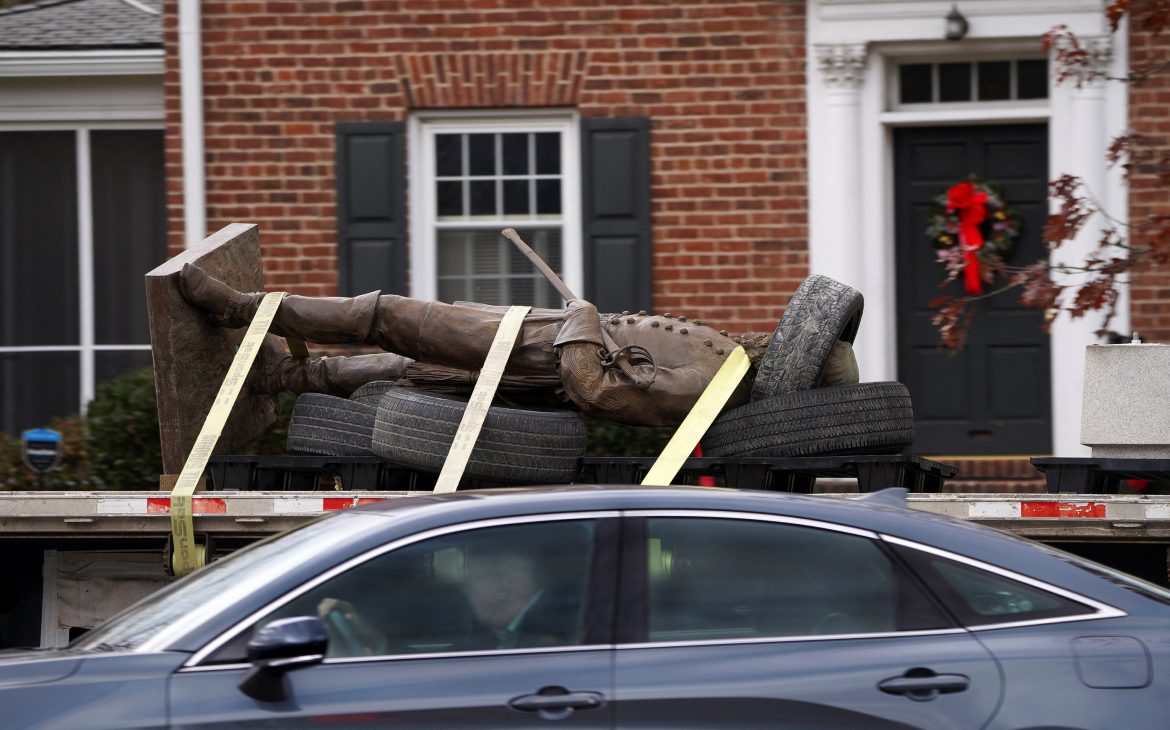 The fate of two statues in different states have recently made headlines as Americans nationwide still wrestle over the idea of allowing certain figures to be immortalized.

In Pennsylvania, a Commonwealth Court three-judge panel ruled that a boxed-up statue of famed explorer Christopher Columbus must be uncovered.

The statue, located in Philadelphia’s Marconi Plaza, was covered up by plywood following the BLM riots of 2020. The covering was ordered to be removed on Friday by Senior Judge Mary Hannah Leavitt.

Mayor Jim Kenney spokesperson Kevin Lessard said that the mayor’s office is “very disappointed” in the ruling, according to reporting by NBC10 Philadelphia.

“We continue to believe that the Christopher Columbus statue, which has been a source of controversy in Philadelphia, should be removed from its current position at Marconi Plaza,” Lessard continued. However, he did indicate that the mayor’s office will comply with the ruling.

“While we will respect this decision, we will also continue to explore our options for a way forward that allows Philadelphians to celebrate their heritage and culture while respecting the histories and circumstances of everyone’s different backgrounds,” Lessard is quoted as saying.

Meanwhile, Attorney George Bochetto who fought to keep the statue in place praised the decision. In a statement quoted by NBC10, Bochetto said he was proud of the judges for reaffirming that America is “not a society ruled by cancel culture mobs” and that “all ethnic groups can proudly protect and honor their diverse heritages.”

The issue over the Columbus statue stems from the 2020 riots.  Many statues of various historical figures, including Confederate General Robert E. Lee and 26th U.S. President Theodore Roosevelt, faced removal or repurposing upon accusations that their depictions promoted white supremacy.

As such, the Philadelphia Columbus statue was likewise targeted during the riots in that city.

However, those with Italian heritage living in the city see the statue of Columbus as “an emblem of that heritage” according to NBC10. A group known as the Friends of Marconi Plaza petitioned to have the box removed following the riots.

However, the fate of a Confederate statue in Virginia is not faring as well as Philly’s Columbus.

On Monday, a memorial to Confederate General Ambrose Powell “A.P.” Hill found in Richmond was dismantled. This marks the removal of the last publicly displayed Confederate statue in the city.

According to reporting from Stars and Stripes, “Richmond Circuit Court Judge David Eugene Cheek Sr. last week rejected a motion from four indirect descendants of Hill, who was killed in the final days of the Civil War, to stop the city’s removal plans.”

The removal of the memorial was complicated since Hill’s remains were buried beneath it in 1891. The descendants had previously agreed to move his remains to a gravesite in Culpeper, Virginia while arguing over the placement of the memorial itself.

The city said it would move the monument, like other Confederate statues before it, to the Black History Museum and Cultural Center of Virginia. Hill’s indirect descendants argued that it should be placed in Cedar Mountain Battlefield, but were denied this request back in October.

They had been trying to stall the removal of the monument as they appeal that decision.

Richmond Mayor Levar Stoney remarked that the removal of A.P. Hill’s memorial “marks the last day of the Lost Cause,” referring to the argument that the main reason the Confederate South seceded and went to war was over state’s rights and freedom from an oppressive government.

However, as with the Columbus statue, some see the removal of Hill’s memorial as akin to erasing history.

In our article on the removal of Robert E. Lee’s statue, FISM’s Seth Udinski summed up the arguments for and against the removal of Confederate statues:

While many rejoice as another reminder of racism in America is destroyed, many others see the danger in attempting to rewrite history by simply omitting all figures that offend the masses.