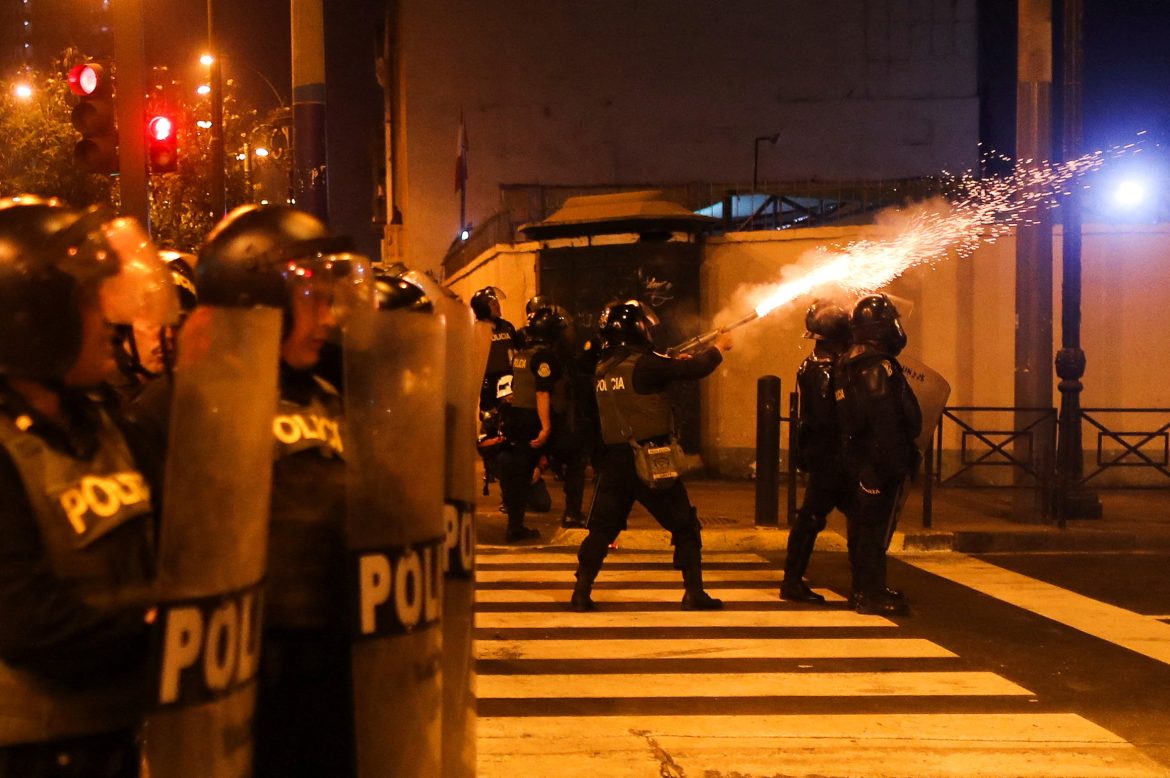 As Peru careers from one political crisis to another, the country has exploded in protest, with at least seven dead in the last week and the smoke of fires and tear gas hanging over city streets. A way out seems distant.

The spark of the current unrest was the ouster and arrest of leftist leader Pedro Castillo after he tried to dissolve Congress illegally. It followed a months-long standoff where lawmakers impeached him three times, the final time removing him from office.

Boluarte, until this year, was a member of the Free Peru National Political Party, a Marxist party. She has been linked to the World Economic Forum (WEF), the group responsible for promoting of the “Great Reset” agenda, and was once photographed with WEF founder Klaus Schwab.

For those watching closely, it should be of little surprise. Voters are fed up with the constant political infighting that has seen six presidents in the last five years and seven impeachment attempts.

The heavily fragmented unicameral Congress is loathed ⁠— with an approval rating of just 11%, according to pollster Datum. That is below Castillo’s, which despite a string of corruption allegations was 24% just before he was removed.

“The Peruvian people are just exhausted from all the political machinations, the crime, uncertainty, and stalling growth,” said Eric Farnsworth, a vice president at the Council of the Americas and Americas Society.

He said Boluarte’s pledge to hold early elections in April 2024 could help calm things in the short run, but that would not solve entrenched issues of a divided electorate and infighting between the presidency and Congress.

“It’s a toxic soup, with a weak president, a dysfunctional Congress, the deposed president seeking to generate a popular resistance to his legitimate removal, an agitated populace, and little vision from anyone on how to get out of this mess.”

Peru’s constitution makes it relatively easy for an unhappy legislature to initiate an impeachment, while a lack of dominant political parties ⁠— the largest, Popular Force, controls just 24 of 130 seats ⁠— means agreement is thin on the ground. Corruption has also been a frequent problem.

The only way many Peruvians feel they can make their voices heard is in the street. In recent days, protesters have blocked roads, set fires, and even taken over airports. Police have come under criticism from human rights groups for use of firearms and teargas. At least seven people, mostly teenagers, have died.

There are echoes of protests in 2020, when thousands took to the streets after the impeachment and ouster of popular centrist leader Martin Vizcarra, who was succeeded by Congress leader Manuel Merino. After two died in the protests, he also was forced to resign.

Castillo, less popular but with a support base in rural regions that helped him to a narrow election win last year, has looked to stoke things from jail, where he is being held while he is investigated over accusations of rebellion and conspiracy.

On Monday, he called Boluarte, his former vice president, a “usurper” in a written letter to the Peruvian people where he claimed to still be the country’s legitimate leader.

“What was said recently by a usurper is nothing more than the same snot and drool of the coup-mongering right,” he wrote, adding a call ⁠— long popular among a younger generation of Peruvians ⁠— for a new constitution.

“The people should not fall for their dirty games of new elections. Enough abuse! A Constituent Assembly now! Immediate freedom!” he wrote.

Boluarte, a former member of Castillo’s far-left party who fell out with its leader and criticized Castillo after his attempt to dissolve Congress, has called for calm around the country and pledged a government of all stripes. But she faces a tough reality, caught between protesters and a hostile parliament.

With the recent history of Peruvian leaders littered with impeachment and jail, it is questionable whether Boluarte can hang on until new elections are held.

“Dina Boluarte is a murderer. Five people have died, and they say nothing. Nothing matters to her, she is shameless, treacherous,” said Guadalupe Huaman, a Castillo supporter protesting with a Peruvian flag and hard hat in Lima.

Cutting Peru’s outlook to negative and threatening a potential downgrade, ratings agency S&P said in a report on Monday that there seemed to be little to be hopeful about.

“The way Peru’s most recent change in power occurred reflects heightened political deadlock, and it increases risks ahead,” it said.

Farnsworth voiced similar concerns. While Peru had a history of volatile politics, it was unclear how things would resolve this time, he said.

“I think this time is somehow different,” he said. “There is no real path forward it seems.”