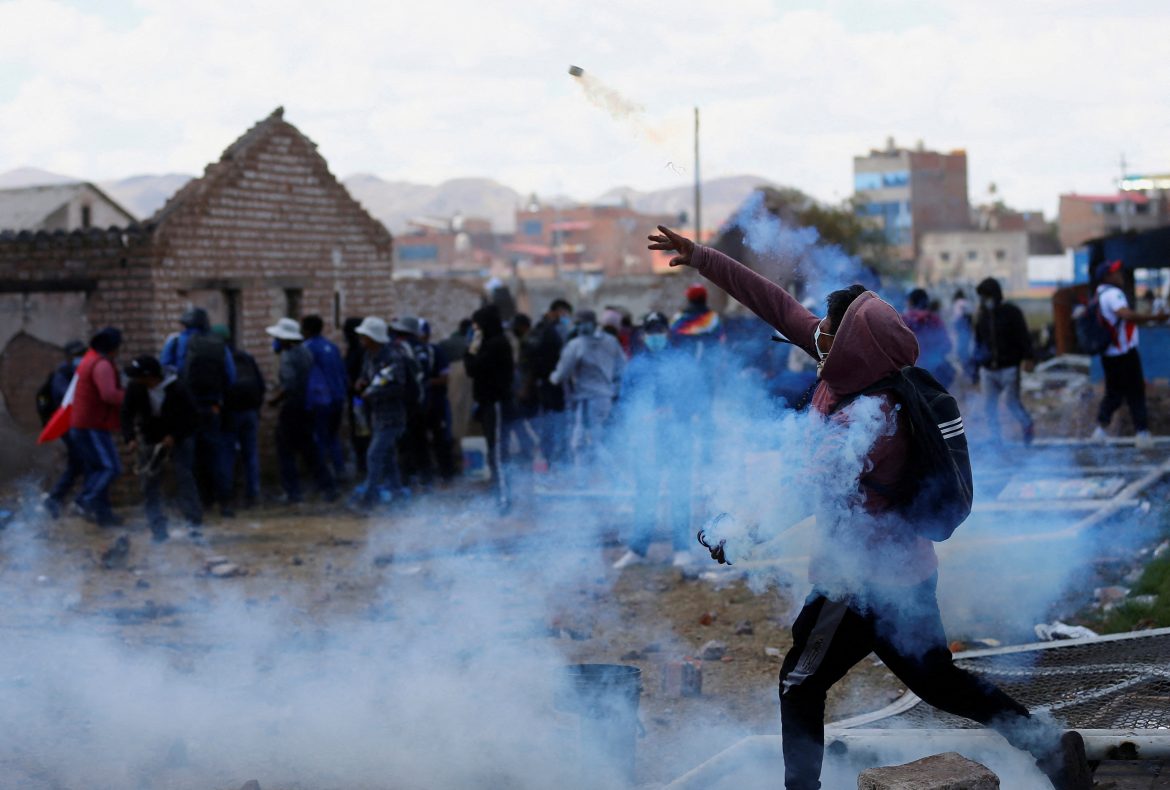 Peru‘s top prosecutor’s office on Tuesday said it has launched an inquiry into new President Dina Boluarte and members of her cabinet over violent clashes that have seen at least 40 killed and hundreds injured since early December.

The new government, however, won a vote of confidence in Congress by a wide margin on Tuesday evening. A loss would have triggered a cabinet reshuffle and the resignation of Prime Minister Alberto Otarola.

The inquiry comes after 17 civilians were killed in the country’s southern Puno region on Monday – the most lethal day of protests since former President Pedro Castillo was ousted and detained last month. The violence continued on Tuesday with a police officer dying after his car was torched.

The attorney general’s office also said it would investigate former Prime Minister Pedro Angulo and former Interior Minister Cesar Cervantes, both of whom served under Boluarte for just a few weeks, for their involvement in handling the protests.

The president’s and ministers’ offices did not immediately respond to requests for comment.

The ouster of Castillo, which came after he illegally attempted to dissolve Congress, has ignited a wave of protests across the country. Protesters are demanding the resignation of Boluarte, the dissolution of Congress, changes to the constitution, and Castillo’s release.

The vote of confidence, a constitutional requirement after a new prime minister takes office, passed with 73 votes in favor, 43 against, and 6 abstentions.

Otarola has blamed organized attackers financed by “dark” money for those killed on Monday. Another 68 civilians and 75 police officers were reported injured.

Otarola also announced a three-day overnight curfew in Puno, aimed at quelling the violence. Footage from local media showed looting of Puno businesses on Monday night, while the airport in the region’s city of Juliaca remained shut on Tuesday after 9,000 people were said to have attempted to invade the premises.

Peru‘s ombudsman office on Tuesday urged peaceful protests as well as for prosecutors to fully investigate the deaths.

The office noted the “extreme violence” of the policeman’s death, claiming he was tortured before he died. The officer, identified as Jose Luis Soncco, had died in a torched vehicle after what senior police commander Raul Alfaro called an “ambush” by a mob in Juliaca.

“They burned him alive,” said Alfaro.

The ombudsman’s office also condemned an arson attack on a Puno congressman’s residence in the city of Ilave with family members still inside and called on authorities to respect international norms with regard to the use of force.

Castillo tweeted on Tuesday that those killed for “defending the country from the coup dictatorship” will never be forgotten.

He has been ordered to remain in pre-trial detention while he is investigated for fomenting rebellion, a charge he denies. The former rural teacher who served less than two years of his five-year term before his removal says he remains Peru‘s lawful president.

Castillo ally Evo Morales, the former Bolivian president who was banned from entering Peru Monday, has also called for an end to what he says is the “genocide of our indigenous brothers.”

Later this week, an Inter-American Commission on Human Rights mission will visit Peru to assess the situation. The United Nations has meanwhile urged respect for human rights and offered to mediate the crisis.

Damar Hamlin discharged from Buffalo hospital, will rehab at home