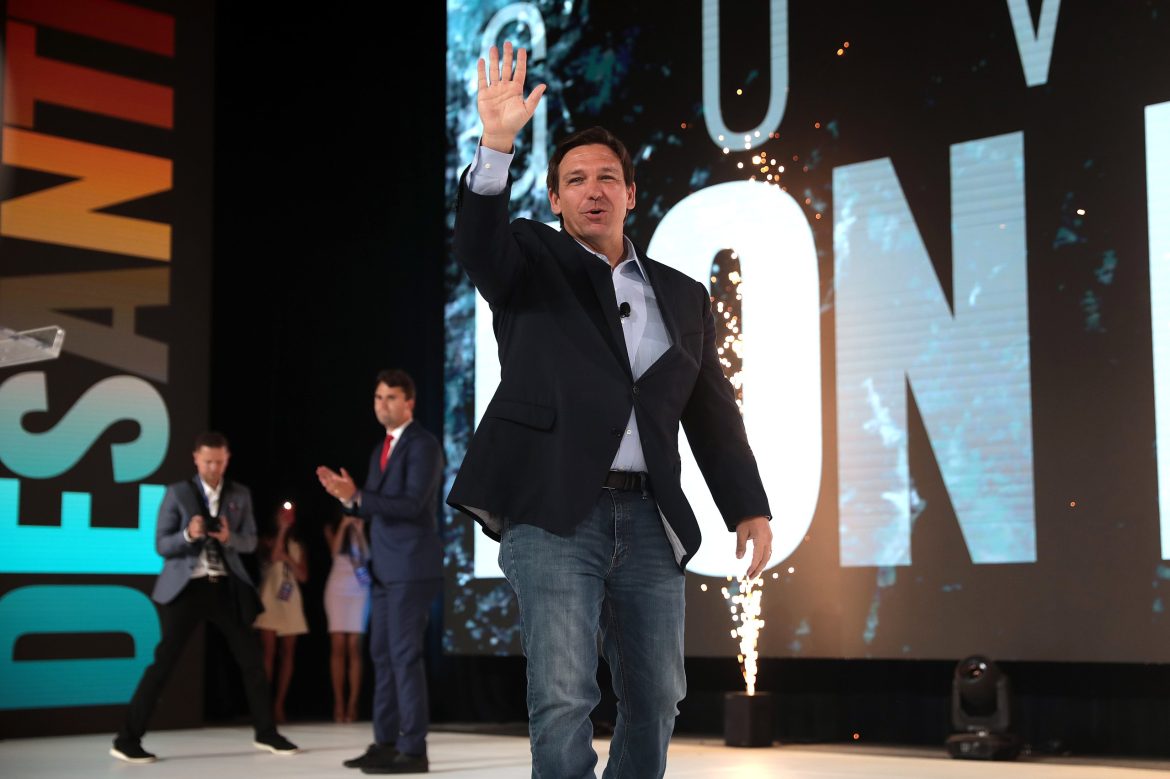 Highly favored GOP Florida Governor Ron DeSantis has been on the receiving end of some recent attack lines spoken by other Republicans as jostling for the 2024 presidential candidacy begins.

DeSantis has not yet formally thrown his name into the hat for the Republican presidential nomination. However, the Sunshine State governor has been seen as a potential Trump rival for 2024 ever since a rift first formed in their relationship over the beaches left open in defiance of federal COVID-19 guidance.

DeSantis has since overtaken Trump in popularity in some areas, with some polls suggesting that he is now more favored than the former president by Republican voters. This has made DeSantis a target for jabs and in-fighting as Republicans begin to test the presidential waters with attempts to dampen the governor’s national support.

While Trump’s nickname “Ron DeSanctimonious” might be the most well-known and enduring GOP jab at the governor, other potential 2024 candidates like South Dakota Gov. Kristi Noem and New Hampshire Gov. Chris Sununu have more recently attacked DeSantis.

For Sununu, the angle is questioning DeSantis’ decision to battle against Disney. The private company feuded with DeSantis and Florida Republicans over the Parental Rights in Education Bill,  a decision that has proved to be questionable, at best, as the company lost $123 billion last year and recently replaced its CEO.

DeSantis, on the other hand, won reelection by nearly 20 percentage points in the traditional toss-up sunshine state and recently announced he is continuing his fight to end Disney World’s self-governing special status.

In an attempt to contrast DeSantis, Sununu has moved to position himself as a free market capitalist that respects a company’s freedom of speech.

“Look, I think we need to push back on woke policy. There’s no question about it,” said Sununu in a Fox interview posted on Jan. 5. However, Sununu said this should be restricted to public realms like schools.

He signaled he disagreed with DeSantis in this regard.

“But to necessarily punish private businesses because they don’t agree with a policy or whatever it might be? Those type of culture wars pushing their way into the private sector? That’s not definitely not – I don’t think we want to be there,” said Sununu.

2024 Watch New: @GovChrisSununu tells @FoxNews "we need to push back on woke policy," but he disagrees with @GovRonDeSantis aggressive actions as a conservative culture warrior in going after corporations. https://t.co/hg19bmAmYR #2024Election #FITN #nhpolitics #FlaPol #FoxNews pic.twitter.com/ZAPbspXNVv

It’s one of two areas that potential 2024 contenders are focusing on in their attacks on DeSantis.

“Governor Noem was the only Governor in America on national television defending the Dobbs decision,” Fury wrote in an email, referencing the Supreme Court decision that overturned Roe v. Wade last year. “Where was Governor DeSantis? Hiding behind a 15-week ban.”

“Does he believe that 14-week-old babies don’t have a right to live?” Fury asked.

It is believed by some that an outspoken stance against abortion was an asset to Republicans who performed well in the midterms while a neutral or unspoken stance led to Republican failure or tight performances against Democrat opponents. Poor election performance, however, certainly didn’t apply to DeSantis.

It could prove to be a line of attack against DeSantis in a presidential run, though. While other Republican-led states moved to enact near-total abortion bans or heartbeat bills, DeSantis signed legislation to ban the procedure after the fifteenth gestational week of pregnancy.

According to the most recent Morning Consult report for the 2024 GOP presidential candidates, Trump currently holds a 13-point lead over DeSantis. Mike Pence, former vice president to Trump, places third in the poll with only 9% of the vote.

However, other polls place the two leaders as running neck-and-neck for popularity when there are other big Republican names in the hat. The University of Massachusetts Amherst found that Trump won by a slim 37% to 34% margin over DeSantis. However, a contest between just DeSantis and Trump ended with the Florida governor winning 51% to 49%.

Noem and Sununu were not even contenders on either poll. They also have yet to officially announce a 2024 bid. Sununu has described himself as a “firm maybe” while Noem has not recently answered the question.