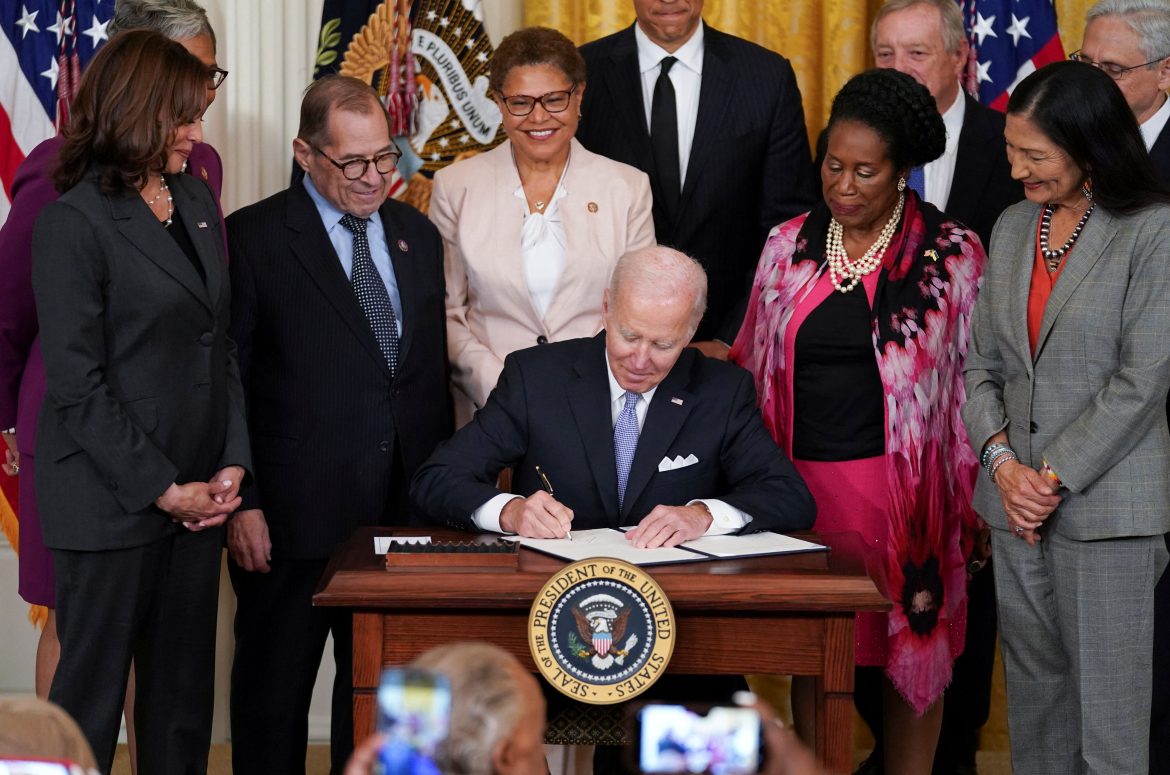 Last year, the House passed the George Floyd Justice in Policing Act but failed to pass the Senate before Biden’s deadline. Now, the president has taken matters into his own hands, bypassing Congress to initiate a system-wide change in federal law enforcement.

Prior to the signing, took to Twitter to blame Republicans for “[standing] in the way of progress.”

I’ve called on Congress to pass the George Floyd Justice in Policing Act, but Senate Republicans have stood in the way of progress. That’s why this afternoon, I’m taking action and signing an Executive Order that delivers the most significant police reform in decades.

The fact sheet, which the White House released prior to the event, includes language that has inflamed the racial debate over the last two years, referring to rampant systemic racism in the criminal justice system.

The fact sheet provided by the White House explains that Biden believes the root of the issue is a lack of confidence in the current police systems: “Police cannot fulfill their role to keep communities safe without public trust and confidence in law enforcement and the criminal justice system…To heal as a nation, we must acknowledge that fatal encounters with law enforcement have disproportionately involved Black and Brown people,”

One major development that will come from the EO is the formation of a national database for police misconduct. The order requires that the Attorney General establish the National Law Enforcement Accountability Database and that all federal law enforcement agencies participate. The database will keep detailed records of officers, including “convictions, terminations, de-certifications, civil judgments, resignations, and retirements while under investigation for serious misconduct, and sustained complaints or records of disciplinary actions for serious misconduct…as well as commendations and awards.” The EO encourages local and state law enforcement agencies to participate as well.

The order will also require that new standards regarding investigations into misconduct are put in place and that federal law enforcement officers wear body cameras during known encounters, such as arrests and searches. It also mandates that agencies make footage available to the public more quickly after a report of serious injury or death.

Additionally, law enforcement officers will also be banned from using chokeholds, or carotid restraints, unless authorized to use deadly force under the new rules. Further restrictions have also been put in place on “no-knock” warrants and entries. Both of these policies appear to be in direct response to the deaths of George Floyd and Breonna Taylor in 2020.

Breonna Taylor was killed during a police execution of a “no-knock” warrant. The officers involved were tried but not convicted.

According to Jim Pasco, the executive director of the Fraternal Order of Police, this latest draft of the order was a culmination effort between law enforcement agencies and the White House.

“We all came at it in the beginning from very different perspectives,” Pasco said, adding “While it may not be totally pleasing to everyone, it addresses many of the concerns and areas of interest on the part of the civil rights community and also on the part of the police community,”

The EO includes requirements for increased systems and training, including prioritizing officer wellness and trying to prevent officer suicides.

While the EO requires these policies and changes to the federal law enforcement systems, the White House also expressed hope that local and state agencies will use it as a guideline to create their own reforms.

In his speech Wednesday afternoon, President Biden began by speaking for several minutes on the tragic Texas elementary school shooting. Besides giving details on the tragedy and trying to encourage the American people by saying he and the First Lady would be traveling to the affected community soon, Biden took additional time to push gun reform. He talked about the need for “common sense” gun legislation, and even plugged his new candidate for the Bureau of Alcohol, Tobacco, and Firearms (AFT).

In addressing the EO, he said, “That’s why the Executive Order I’ll be signing today is so important, in my view. It’s a measure of what we can do together to heal the very soul of this nation. To address profound fear and trauma, exhaustion, and particularly black Americans have experienced for generations. And to channel that private, plain, and public outrage into a rare mark of progress for years to come.”

After praising the George Floyd protests which he said “unified people of every race and generation,” Biden stated, “The message is clear, ‘Enough! Just enough!’”

He praised the police officers who testified against misconduct, particularly in the Chavin case, saying, “I don’t know any good cop that likes a bad cop. But for many people, and many families here, such accountability is all too rare.”

Before signing the order into action, he encouraged Congress once more to pass the George Floyd Justice in Policing Act, saying he didn’t sign this EO earlier in order to not undercut their efforts.