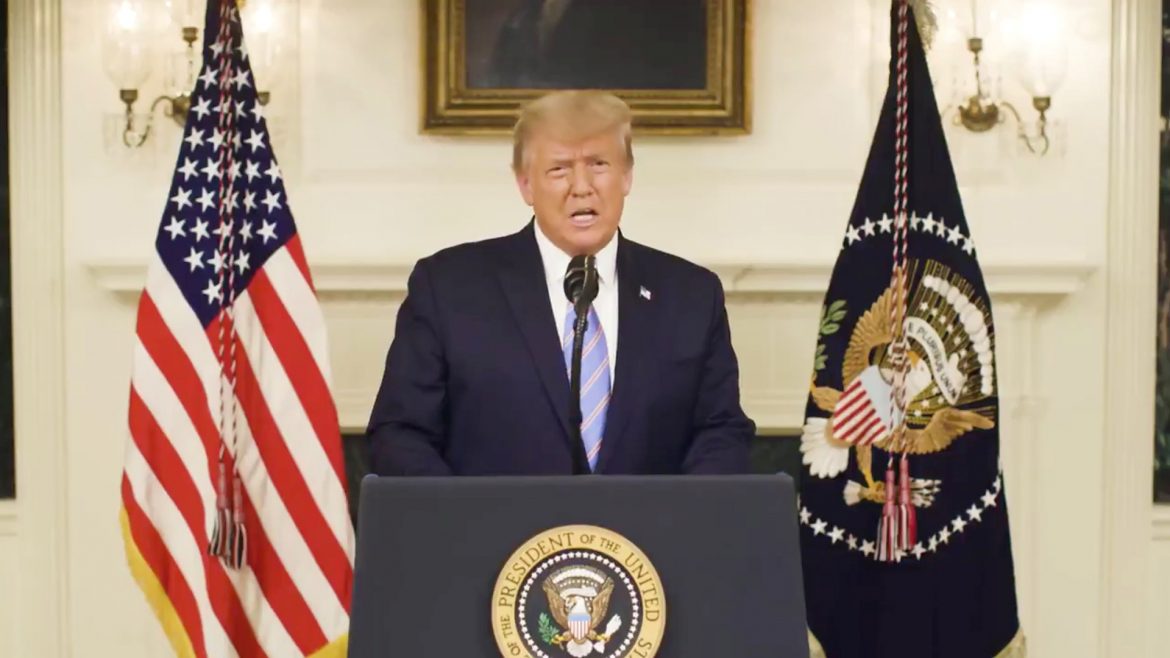 President Donald Trump condemned the Capitol building rioters, called for calm and healing, and said that serving as president was the honor of his lifetime in a new video posted to Twitter.

In his first post since his account was suspended, Trump acknowledged the certification of the election results, naming Joe Biden the 46th President of the United States. He said his focus has now turned to “ensuring a smooth, orderly, and seamless transition of power” in light of these results.

Trump’s initial comments denounced the rioters and looters stating that those who “infiltrated the Capitol have defiled democracy” and that those who broke the law “will pay.” He defended the process of contesting the election results saying that his “only goal was to ensure the integrity of the vote” and “defend American democracy,” reiterating the importance of election law reform for the future.

President Trump then focused on the need for unity in our country in light of recent events and emphasized his desire for the transition of power to be a moment that brings “healing and reconciliation.”

This comes after Democratic officials have accused Trump of inciting the Capitol riots and called for his impeachment.

It will take over 100 years to turn our country around

Argentina is 50 years ahead of us

There has been an urgent and outstanding need in this country for no less than thirty years to mandate that all legal registered voters present a pictured voter registration card issued by the appropriate government-state authority and/or present an appropriate government-state authority issued pictured identification card along with a valid government-state issued voter registration card. We are a nations of citizens; native born and naturalized. Absolutely no one other than these two classifications of citizens should ever be permitted to vote. Only law-abiding citizens in good standing should be able to vote. When our precious nation was being formed, the wise go-fearing men and woman who contributed to leading and shaping this great democratic republic of ours, did so based upon an absolute truth; truth of the holy bible, an informed and educated popular and the responsibility of voters to act responsibly and be engaged continuously in the affairs of the republic. Unfortunately, in both our nation and in western civilization as a whole, there has been a growing travesty by voters resulting in a class of political elites that was definitely never intended not should it exist today in our precious and unique democratic republic. President Trump has been a great leader and president and chief for this wonderful nation of ours., His style while unorthodox at times has proven to be a key negotiation tactic of his by causing deliberate disruption to what has unfortunately become our “non-thinking, illogical and torpid” politically correct way of life in the USA and in western civilization. It is all actually very nauseating at best. Why can’t people within western civilization see and acknowledge that six of the ten biblical commandments are enforced and reflected across all societies on earth regardless of their development, that nature itself states only two genders exist; male and female and all food and medical standards practiced across the modern and developing world are founded upon the Levitical laws. No matter how smart, knowledgeable and wise we think we have developed, we will never be able to create life without using first already “living tissue” that we ourselves didn’t create but only God Himself. I truly believe that President Trump was trying to do a noble thing and achieve the right thing for our country long-term when challenging the election results and stating there is fraud in the system. Both parties have acknowledged this and stated this for decades, thus the need mentioned earlier heron. However, we are all made of flesh and therefore all sin and do not do anything perfectly; I’d believe President Trump could have used better judgment but like each of us, we can all point to our past and see where we too, have allowed our emotions, or feelings to get the better of us in our decision making. None of us are without fault and without sin. I thank our Lord for allowing the country to experience the wonderful leadership and developments we have during President Trumps term in office and the loyal service of those who came alongside him at various times during his term in office. I pray we might again become a land of god-fearing citizens before our mighty democratic republic is swept away by the sinful, foolish greed that has been slowly consuming all of western civilization for decades. All change is possible in the USA and especially with subjection to the gospel of Jesus Chris our Lord and Savior with the power of the Holy Spirit. May we come together in selfless love for the glory of God and the benefit of our fellow citizens and our world neighbors around the globe.