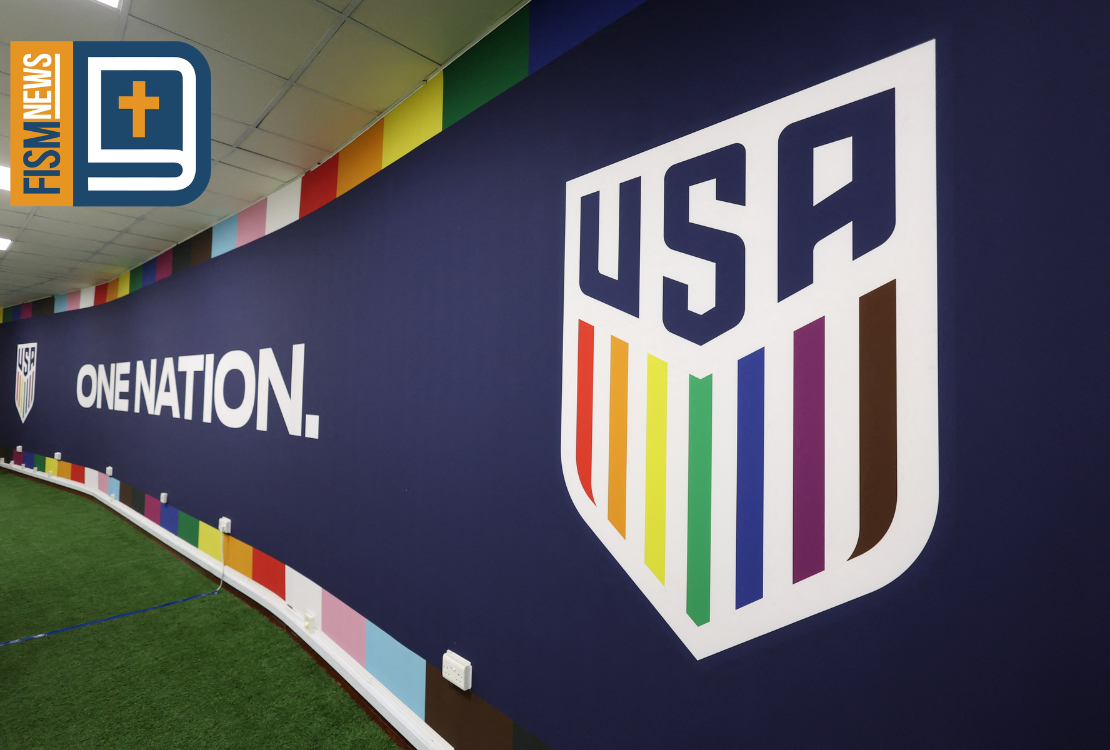 The U.S. men’s World Cup squad is showing support for the LGBTQ ideology by way of a rainbow-themed team logo inside their training facility and media workroom.

Same-sex relationships are illegal in Qatar, the host nation of the tournament starting on Sunday.

The design features seven rainbow-colored vertical stripes below “USA” in dark blue letters and is part of the “Be The Change” initiative the team adopted in 2020 with the goal of inspiring action on “social justice issues.”

“When we are on the world stage and when we are in a venue like Qatar, it is important to bring awareness to these issues and that is what ‘Be the Change’ is about,” U.S. men’s national team coach Gregg Berhalter told a news conference on Monday.

“It is not just stateside that we want to bring attention to social issues, it is also abroad. We recognize that Qatar has made strides and there has been a ton of progress but there’s some work still to do.”

Organizers of the World Cup, which is the first to be held in a Middle Eastern nation, say that everyone, no matter their sexual orientation or background, is welcome, while also warning against public displays of affection.

Soccer players have raised concerns over the rights of fans traveling to the Nov. 20-Dec. 18 World Cup, especially LGBTQ individuals and women, whom rights groups say Qatari laws discriminate against.

“We are a group who believes in inclusivity and we will continue to project that message going forward,” said U.S. goalkeeper Sean Johnson.

“We have chatted and continue to have discussions as we lead into the games. We have leaned on the message of ‘Be the Change.’

“That is something that we have been proud of and continue to work towards, be impactful with ourselves, our presence, and our platform, and we will continue to be so here in Qatar.”

The rainbow badge, which will not be worn by the team during World Cup games, has been routinely displayed by U.S. Soccer no matter the occasion as a way to promote the LGBTQ agenda.

“Our rainbow badge has an important and consistent role in the identity of U.S. Soccer,” U.S. Soccer spokesman Neil Buethe said in an email to Reuters.

“As part of our approach for any match or event, we include rainbow branding to support and embrace the LGBTQ community, as well as to promote a spirit of inclusiveness and welcoming to all fans across the globe.

“As a result, locations that we will manage and operate at the FIFA World Cup, such as the team hotel, media areas, and parties, will feature both traditional and rainbow U.S. Soccer branding.”

Why does U.S. Soccer — or anyone else for that matter — feel the need to bring attention to sexuality at a sporting event? Can we not enjoy sports without being inundated with symbols of sexual immorality?

The Bible’s stance on homosexuality is clear. It is a sin and an abomination (Leviticus 18:22, 20:13). Those who practice homosexuality, like all other sins, and do not repent will not inherit the kingdom of God (1 Corinthians 6:9-11, Jude 1:7).

No longer does our culture see sexual perversion as sin. In fact, our national representatives on the world stage now celebrate sexual sin and those who pridefully flaunt their sinfulness under the guise of “inclusion”, “acceptance,” and even “love.” And those who boldly stand for scriptural truth and biblical sexuality are ridiculed and labeled as “bigots,” “haters,” and “homophobes.”

So where does this leave us, believers? What are we to do in this age when it seems the fight for Biblical truth in sexuality gets harder every day?

My advice is this: Stand strong on the firm foundation of the truth of the Gospel of Jesus Christ and His eternal Word. We cannot hope to change our culture and our world with hate, compromise, or silence. We must show true love to our neighbors. We must be unyielding examples of Biblical marriage and sexuality. And we must boldly proclaim the truth of Scripture at every opportunity.

God created man and woman to be joined together as one flesh through the act of sex within the confines of faithful marriage (Mark 10:6-9, Genesis 2:24). Every other form and context for sexuality is a violation of God’s design and a sin, and the Bible teaches that “the wages of sin is death, but the gift of God is eternal life in Christ Jesus our Lord” (Romans 6:23).

Make no mistake, our culture is suffering and will suffer further if our country continues to ignore God’s design for mankind.

For this reason God gave them up to vile passions. For even their women exchanged the natural use for what is against nature. Likewise also the men, leaving the natural use of the woman, burned in their lust for one another, men with men committing what is shameful, and receiving in themselves the penalty of their error which was due. – Romans 1:26-27

We must not accept or celebrate sin, but repent and turn away from sin and toward Christ Jesus. Take hope in the fact that this age of sin will not last forever. Our King will return and usher in a new kingdom, where He will reign in truth and glory forever.