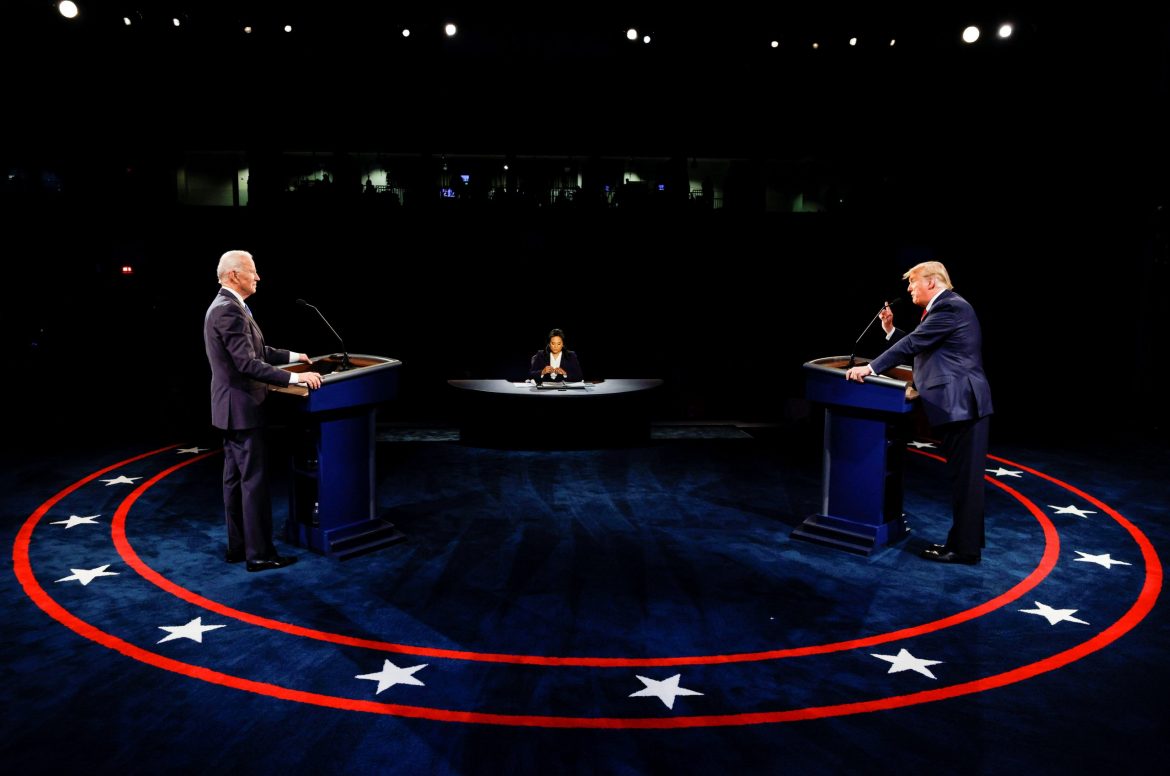 Last night’s presidential debate was lively but far less chaotic than the first round, which was characterized by interruptions and name-calling. The threat of muting the candidates kept their messages focused and allowed for the American public to hear the distinction clearly and without distraction.

Moderated by NBC News’ Kristen Welker, the debate began with a look into the current administration’s handling of COVID-19. President Trump mentioned the progress of vaccines from companies like Johnson&Johnson and Pfizer under the government’s “Operation Warp Speed,” and optimistically clarified that a vaccine is not guaranteed in a few weeks but is well on the way.

Former Vice President Joe Biden said that many families are dealing with an “empty seat” at the kitchen table, a line he has used before when talking about the current President’s handling of the coronavirus. Biden said he has a plan to tackle the pandemic and emphasized increased masked wearing, faster testing, and lockdowns when necessary. Trump knocked Biden, saying the plan Biden was suggesting was not significantly different from his administration’s actions.

Concerning state and nationwide shutdowns and their impact on the economy, Trump pushed for ending lockdowns while Biden wants to take a “safer” approach. Biden said businesses “needed” proper resources such as plexiglass dividers before they could reopen. Trump responded by saying this is an “expensive” approach and would rather allow businesses and schools the opportunity to open. Trump remarked that the states and cities with the strongest shutdown measures are “dying,” specifically mentioning New York City.

Welker moved to election interference, and each candidate focused on the other’s business relationships with foreign entities. Trump talked about his tough sanctions on Russia, supplying Ukraine with defense capabilities to defend itself. Trump accused the former VP receiving payments as the “Big Man” from his son’s business dealings, referencing a New York Post article revealing emails from Hunter Biden’s laptop that suggest the younger Biden has used the family name for influence with foreign companies.

Biden responded, saying he never received a penny from any foreign entity, and that his dealings in Ukraine were ethical. Biden aimed for Rudy Giuliani peddling the Hunter Biden story and said the President did nothing about Russian-backed bounties on American soldiers in Afghanistan. Biden also attacked Trump for having a Chinese bank account and argued this created a compromising position for the President.

The President was asked to defend his relationship with North Korean Dictator Kim Jung Un. Trump argued that having a positive relationship with Kim is safer than the alternative. Biden attacked Trump for being too soft on the dictator and said the U.S. needs to be tougher on Kim.

Healthcare and the Economy

The topic moved to healthcare. Trump said that he has attempted to dismantle Obamacare by removing the individual mandate, which he believes creates the impetus to strike down the Affordable Care Act (ACA) altogether. The President said he would like to replace it with something better but gave no specifics as to what a new plan would be. He also accused Biden of pushing socialized medicine.  Biden said he doesn’t support socialized medicine but instead wants Obamacare with a public option. The former VP said he supports private insurance and claimed not a single person lost their private insurance under the ACA.

Concerning the economy and unemployment, Trump emphasized his willingness to provide further economic relief in the pandemic but said Nancy Pelosi is holding him up. Biden rebutted Trump saying there is a bill already on the table. He also suggested a 15 dollar an hour minimum wage will help, but Trump argued that’s an issue for the states to decide for themselves.

When speaking about immigration, questions focused mainly on separating children from parents at the border and how each administration planned to reunite them. Trump emphasized the wall and legal immigration processes, saying that kids were coming over with coyotes and cartels, not necessarily their parents. He remarked that the “cages” these children were kept in were created during the Obama administration – goading the former VP by asking: “Who built the cages, Joe?” – but that he’s working on reuniting these families. Biden said these children were separated from their parents at the border and that Trump’s “criminal” policies are what’s keeping them apart. Biden explained that he would also work to present Congress with citizenship for 11 million illegal immigrants “within 100 days.”

Welker moved the topic to racism, which Biden stated is prevalent in the country. He said that our country has never lived up to the phrase “all men are created equal” and that he has a clear plan to address the issue. Trump boasted of his administration’s crime and prison reforms, as well as his long-term funding for historically black colleges.

Welker also challenged Biden on his crime bills in the ’80s and ’90s that have been criticized for their punishments with minor drug offenses. Biden claimed that these bills, although they were meant to curb the drug problem at the time, were a “mistake” and that rehabilitation needed to be included in minor offenses. The topic concluded with Trump asking why Biden had not done anything about it during his 8 years as VP.

The final topic of the night centered around climate change. Trump touted the reduction of carbon emissions during his administration and compared a “cleaner” U.S. to more “filthy” countries like China, Russia, and India. Trump stated flatly that he “won’t sacrifice jobs” for the Paris Accords, which the U.S. exited in 2017. Biden said there is a “moral obligation” to deal with climate change and limit emissions, boasting his support from different environmental agencies. He said his plan will create more economic growth and jobs than Trump’s current energy plan. Trump mentioned the Congressional Democrats’ Green New Deal and how expensive it will be for the American people.

Solar and wind energies were touched on as Biden said they are growing rapidly and that the U.S. should move towards propping them up. However, Trump took pride in America’s energy independence and says solar and wind aren’t quite there yet. When asked about fracking, Biden claimed he “never said he opposed fracking” and wanted to take a more transitional approach from fossil fuels to solar and wind. Trump asked Biden if he would shut down the oil industry, to which Joe said he “would transition from the oil industry. Yes.”