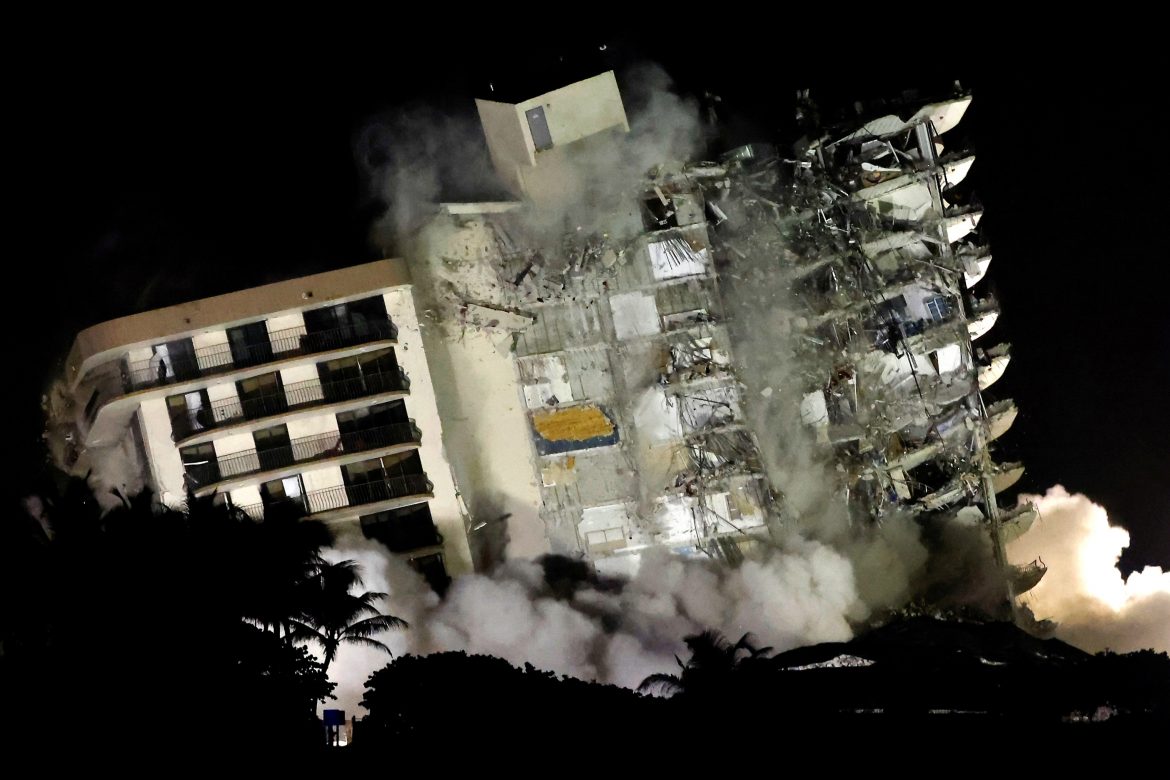 Three more bodies were recovered from the wreckage of the collapsed Surfiside condo high-rise on Monday morning after demolition crews brought down the portion of the building that had been left standing following the June 24 tragedy.

Rescue crews seemed reinvigorated in their search efforts as the threat of Tropical Storm Elsa lessened in the area. The decision to demolish the remaining structure was preventative in light of the threat that Elsa may hit, but the storm’s path is set to miss the Miami area. After hitting Cuba, it appears that Elsa will make landfall in northern Florida early Wednesday.

MONDAY 11 AM CONE – The forecast track has been nudged slightly Westward. Florida Keys remain under Tropical Storm Watches & Warnings. Heavy rain & gusty winds likely to reach the area between midnight to 2 am. Surge of moisture to lift Northward on the East side of #Elsa. @wsvn pic.twitter.com/djqOYQbp5q

The death toll has now reached 27 with 118 people still missing. While no one has been pulled from the wreckage alive, workers are holding out hope that there could still be survivors in pockets of the rubble. However, with each hour that passes, the likelihood of finding anyone alive unfortunately becomes more and more dim.

The Israeli Defense Force previously sent 11 search and rescue experts to the scene to assist those who have been working tirelessly around the clock, and have since taken the lead in recovery efforts. The crew’s advanced training and tools have been touted by those on the ground as immensely beneficial.

Surfside Mayor Charles Burkett emphasized in a televised address that the rescue crews are still treating this as a rescue mission, not a recovery mission:

It’s absolutely not a recovery effort…. We’re not even near that. And, you know, there’s nobody in charge really talking about stopping this rescue effort. And this rescue effort, as far as I’m concerned, will go on until everybody’s pulled out of that debris.”

Governor Ron DeSantis said that the news of Elsa veering away from Miami was “positive” as he lifted the state of emergency for Miami-Dade county allowing rescue efforts to continue more seamlessly.

On Thursday, DeSantis and President Biden had put politics aside as they visited the site of the tragedy together and met with families of those who were missing. DeSantis praised Biden for his administrations response to the tragedy, “You’ve recognized the severity of this tragedy from day one. you’ve been very supportive.” Biden has promised to fund all recovery efforts for the first month.

A Moment In History: Valley Forge