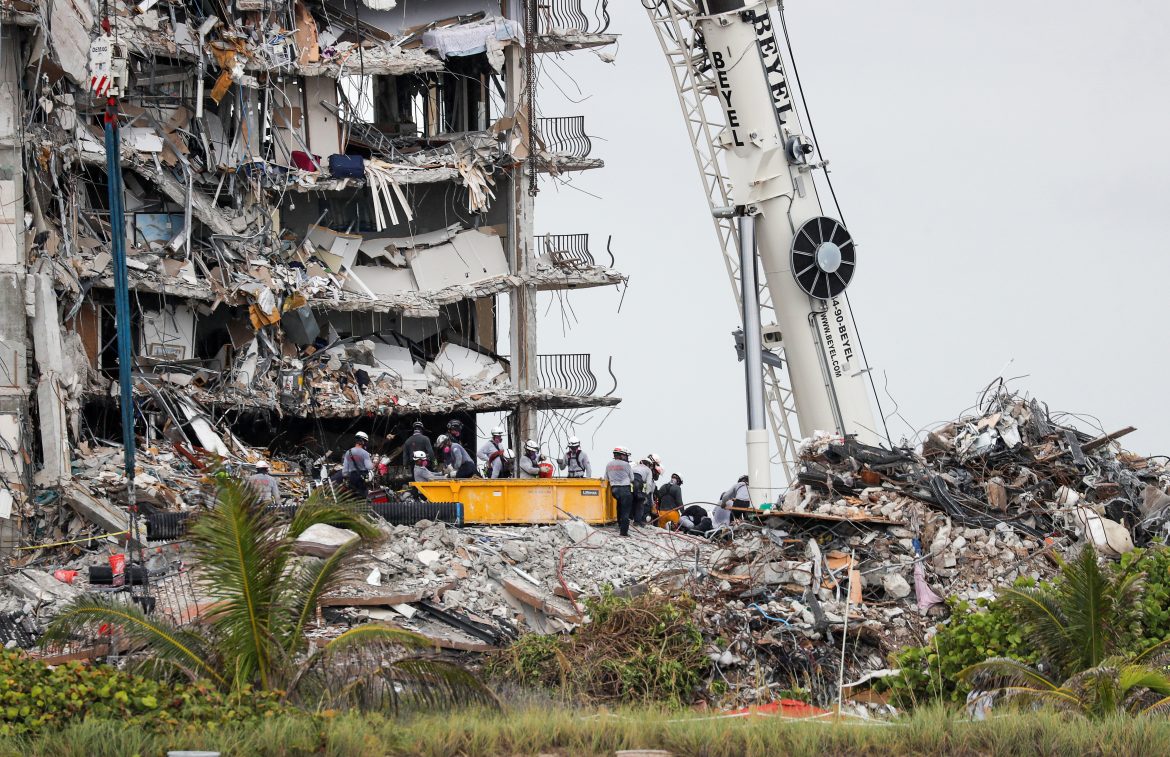 With 150 people still missing nearly a week after the collapse of a Florida high-rise condominium, authorities on Tuesday said rescuers had redoubled efforts to find any survivors even as officials sought to explain the formidable hurdles facing search teams.

Miami-Dade County Mayor Daniella Levine Cava told reporters that no bodies had been recovered from the rubble since Monday, keeping the official death toll at 11.

What caused a major section of the 40-year-old building to suddenly crumble into a heap remains under investigation. Initial attention has focused on structural deficiencies described in a 2018 engineer’s report.

In April 2021, the condo association’s president warned residents that concrete damage had “gotten significantly worse” along with roof damage, and urged them to pay some $15 million in assessments needed to make repairs, media reported.

Authorities on Tuesday held out the possibility that survivors might yet be found in the pile of concrete and twisted metal left when nearly half of the 12-story, 136-unit tower caved in on itself.

“The way I look at it as an old Navy guy is that when somebody is missing in the military, you’re missing until you’re found, and we don’t stop the search,” Florida Governor Ron DeSantis told a news briefing. “Those first-responders are breaking their back, trying to find anybody they can.”

Officials said late on Monday that emergency teams were still treating the round-the-clock operation – which has employed dog teams, cranes and infrared scanners – as a search-and-rescue effort.

But no one has been extricated alive from the ruins of the oceanfront Champlain Towers South condo in Surfside since a few hours after one side of the high-rise collapsed early on Thursday as residents slept.

Fire officials have spoken of detecting faint sounds from inside the rubble pile and finding voids deep in the debris large enough to possibly sustain life.

“That building collapsed almost in a footprint of where that building stood – we’re talking about 12 stories, with subterranean garages all within that same footprint,” Cominsky said. “I’m sure to emphasize the magnitude of what we encountered, what we’re seeing,” he told reporters.

Rescue workers have moved 3 million pounds of concrete “piece by piece” from the debris since the collapse, Cominsky said.

“We continue to search (the) grid, layer by layer, removing debris as we continue to move forward.” The teams include experts sent by Israel and Mexico to assist in the search.

“They want to thank the heroic first responders, search-and-rescue teams and everyone who has been working tirelessly around the clock, and meet with the families who have been forced to endure this terrible tragedy,” White House spokeswoman Jen Psaki told reporters.

The disaster has led officials in nearby areas scrambling to check the safety of buildings.

Miami Beach, just to the south of Surfside, has ordered a “walkthrough visual” inspection of about 500 multi-family commercial units over the next week, Mayor Dan Gelber said.

“But at the same time we are going to require within probably three weeks, all of these buildings in the recertification process to come up with an updated report,” Gelber told CNN.

The tragedy may end up ranking as the greatest loss of life from an accidental building collapse in U.S. history.

A makeshift memorial a block from the site held bouquets of fresh hydrangeas tucked into a chain-link fence. A poster board with hearts had a message for the first responders: “Thank you for looking for my grandmother.”