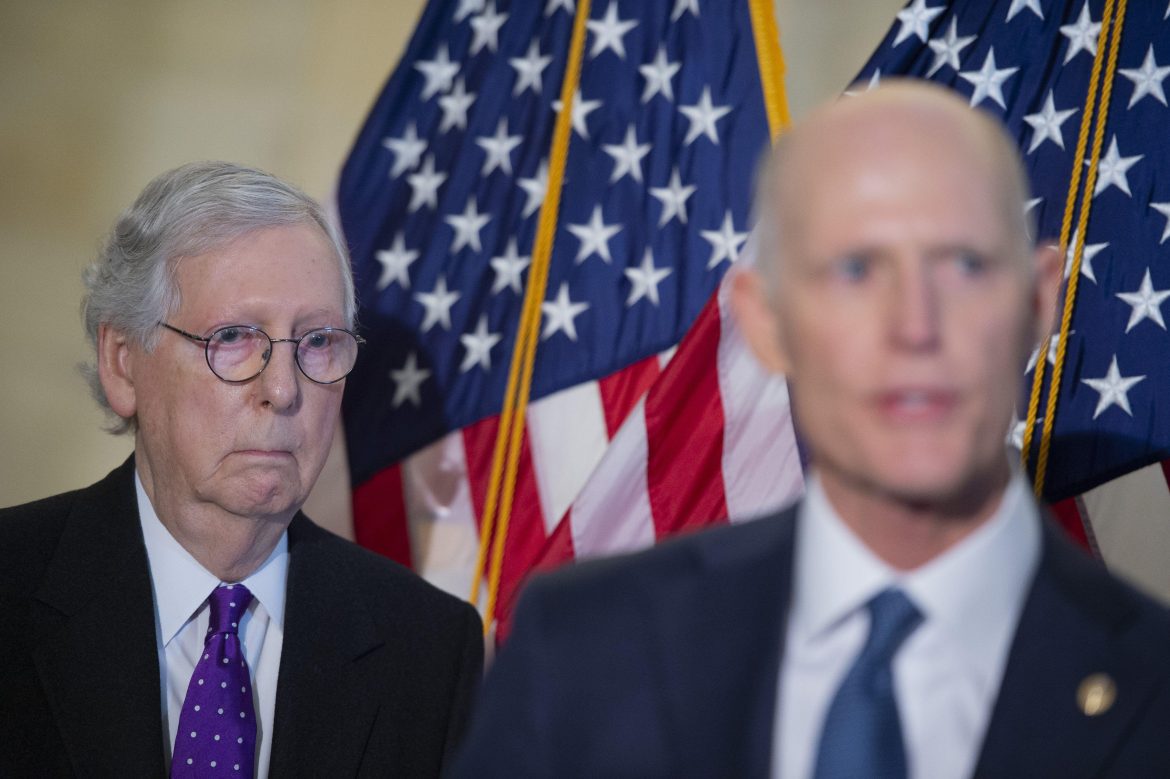 If former President Donald Trump has his way, Florida Sen. Rick Scott (R-Fla.) will be the next Senate leader if the GOP gains control.

When asked by “Glenn TV” host Glenn Beck if he would endorse Sen. Scott over Sen. McConnell (R-Ky.), Trump responded,  “I’m not a fan of McConnell and I am a fan of Rick Scott. And you have others out there that would be very good. The problem is because of his [McConnell’s] position, he’s able to raise money and he gives money to a lot of senators.”

Trump made it very clear how he feels about Sen. McConnell when he referred to him as a “strange guy” and went on the record admitting he made a bad choice.

“I made a mistake when I endorsed him,” Trump said. “Kentucky likes me a lot. They don’t like him a lot.”

“I don’t dislike anybody. I mean, I have my beliefs about, you know, what I’d like to accomplish up here, but I don’t dislike people,” Scott responded.

“I don’t dislike anybody.” pic.twitter.com/vle1me42zW

That same night, Republican strategist and former Senate aide Brian Darling told The Hill that if Sen. Scott thinks he has a chance of winning, he might run.

“But the bottom line is the Senate is a club and I don’t see him beating McConnell for leader. There just don’t seem to be the votes there to take McConnell out as leader,” Darling said. “Maybe he leverages another position in leadership.”

On the Sunday before Tuesday’s elections, when asked by NBC’s Chuck Todd if he would consider running for Senate Majority Leader, Sen. Scott said it was a possibility. He responded by saying he’s “not focused on anything except getting a majority Tuesday night.” Todd proceeded to call Sen. Scott’s response a “non-answer,” with Sen. Scott replying once more with “it’s a possibility.”

Back in August, Sen. McConnell drew criticism when he downplayed the hopes of Republicans everywhere by indicating their party might not capture control of the Senate after the fall elections.

“I think there’s probably a greater likelihood the House flips than the Senate. Senate races are just different. They’re statewide, candidate quality has a lot to do with the outcome,” he said in Florence, Kentucky, at a Northern Kentucky Chamber of Commerce luncheon.

Sen. Scott didn’t call out Sen. McConnell directly after he made those “candidate quality” comments, but he did pen an op-ed piece for the Washington Examiner where he seemingly blasted him.

Unfortunately, many of the very people responsible for losing the Senate last cycle are now trying to stop us from winning the majority this time by trash-talking our Republican candidates. It’s an amazing act of cowardice, and ultimately, it’s treasonous to the conservative cause. Giving anonymous quotes to help the Washington Post or the New York Times write stories trashing Republicans is the same as working with the Democratic National Committee.

Sen. Scott, who chairs the National Republican Senatorial Committee, went on to write:

Ultimately, though, when you complain and lament that we have ‘bad candidates,’ what you are really saying is that you have contempt for the voters who chose them. Now we are at the heart of the matter.  Much of Washington’s chattering class disrespects and secretly (or not so secretly) loathes Republican voters.

As of early Wednesday afternoon, it looks like the Republicans will likely need to win a December runoff in Georgia between incumbent Democrat Raphael Warnock and Republican Herschel Walker to get, at best, 51 seats in the Senate.