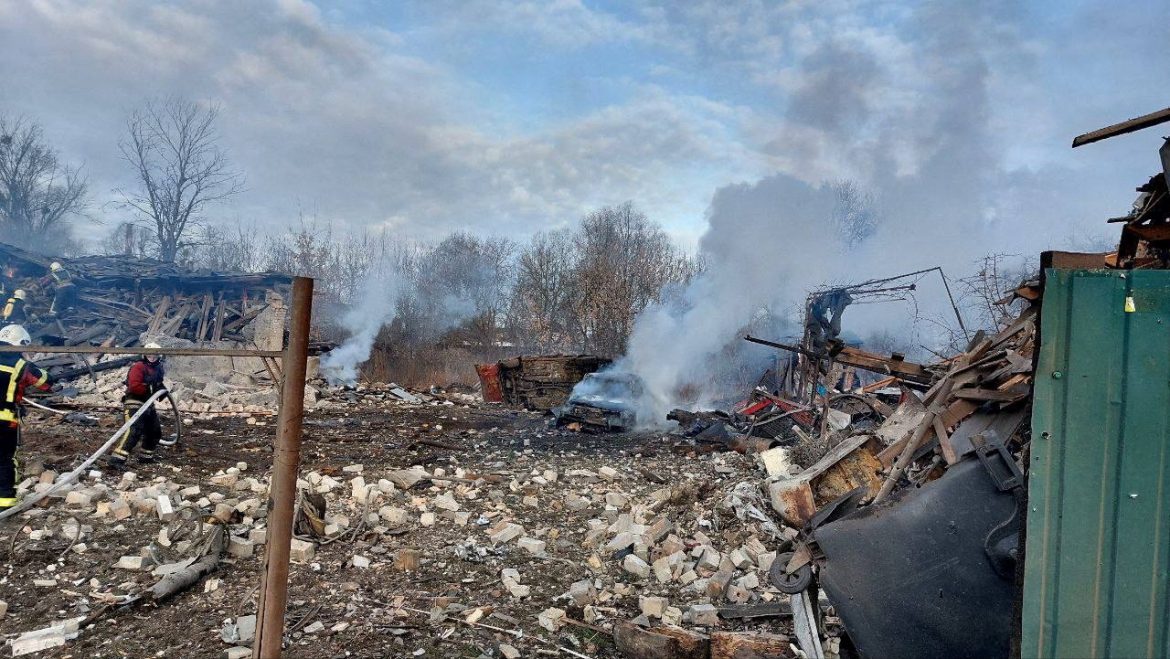 Russia fired scores of missiles into Ukraine early on Thursday, targetting the capital Kyiv and other cities including Lviv and Odesa in the west, in one of its largest aerial bombardments that sent people rushing to shelters and knocked out power.

Ukraine’s military said it had shot down 54 missiles out of 69 launched by Russia in an assault that began at 7 a.m. local time. Air raid sirens rang out across Ukraine and in Kyiv sounded for five hours — one of the longest alarms of the war.

Officials had earlier said more than 120 missiles were fired into Ukraine during the attack.

“Senseless barbarism. These are the only words that come to mind seeing Russia launch another missile barrage at peaceful Ukrainian cities ahead of New Year,” Ukraine’s Foreign Minister Dmytro Kuleba tweeted.

In Kyiv, Reuters footage showed a team of emergency workers poring through the smoldering wreckage of residential houses destroyed by a blast and smoke trails of missiles lingering in the sky over the capital.

In Kharkiv, Ukraine’s second-largest city, firefighters worked to extinguish a large blaze at an electricity station.

In the southern central city of Zaporizhzhia, houses were damaged and a missile left a huge crater.

“I woke up to everything shaking, crumbling. I got up and screamed, ‘Vitia, Vitia (my husband), where are you?’ I ran barefoot on glass. He appeared and glass was falling off him,” said 60-year-old local resident Halyna.

“The enemy placed a high stake on this attack, preparing for it for two weeks. Ukrainian air defense forces demonstrated an incredible level of skill and efficiency,” said Ukraine’s Prime Minister Denys Shmyhal on the Telegram messaging app.

“At the same time, there were hits and damage, in particular to energy facilities. In some areas, emergency shutdowns may be applied to avoid accidents in the networks. Our power engineers are already working to repair everything,” he added.

The latest blitz came hard on the heels of the Kremlin’s rejection of a Ukrainian peace plan, insisting that Kyiv must accept Russia’s annexation of four Ukrainian regions.

Kyiv authorities said two private houses in Darnytskyi district were damaged by the fragments of downed missiles and a business and a playground were also damaged. The mayor of Kyiv, Vitali Klitschko, said 16 missiles were shot down and three people were injured in the attacks.

The mayor of Lviv, Andriy Sadovyi, said on Telegram that 90% of his city near the Polish border was without electricity. The missiles damaged an energy infrastructure unit.

In the southwestern Odesa region the fragments of one missile hit a residential building, though no casualties were reported, its governor Maksym Marchenko said.

Moscow has repeatedly denied targeting civilians, but Ukraine says its daily bombardment is destroying cities, towns, and the country’s power, medical, and other infrastructure.

Belarus’ state-run BelTA news agency reported that a Ukrainian S-300 missile had fallen onto the territory of Belarus on Thursday and published a photo of what it said were parts of it lying in an empty field.

Minsk was investigating whether its air defense systems had shot down the rocket or whether it was a misfire. The incident happened around the time Russia was firing missiles at Ukraine.

In Russia, a regional governor said air defenses had shot down a drone near the Engels air force base, hundreds of kilometers from the frontlines in Ukraine and home to long-range strategic bombers. Russia says Ukraine has already tried to attack the base twice this month.

Russia invaded Ukraine on Feb. 24 in what President Vladimir Putin calls a “special military operation” to demilitarize its neighbor. Kyiv and its Western allies have denounced Russia’s actions as an imperialist-style land grab.

Sweeping sanctions have been imposed on Russia for the war, which has killed tens of thousands of people, driven millions from their homes, left cities in ruins, and shaken the global economy, driving up energy and food prices.

There is still no prospect of talks to end the war.

Zelenskyy is vigorously pushing a 10-point peace plan that envisages Russia respecting Ukraine’s territorial integrity and pulling out all its troops.

But Moscow dismissed it on Wednesday, reiterating that Kyiv must accept Russia’s annexation of the four regions – Luhansk and Donetsk in the east, and Kherson and Zaporizhzhia in the south. It also says Ukraine must accept the loss of Crimea, the Black Sea peninsula annexed by Russia in 2014.

There can be no peace plan “that does not take into account today’s realities regarding Russian territory, with the entry of four regions into Russia”, Kremlin spokesman Dmitry Peskov said.

Russian Foreign Minister Sergei Lavrov said Zelenskiy’s idea of driving Russia out of eastern Ukraine and Crimea with Western help and getting Moscow to pay damages to Kyiv is an “illusion”, the RIA news agency reported.