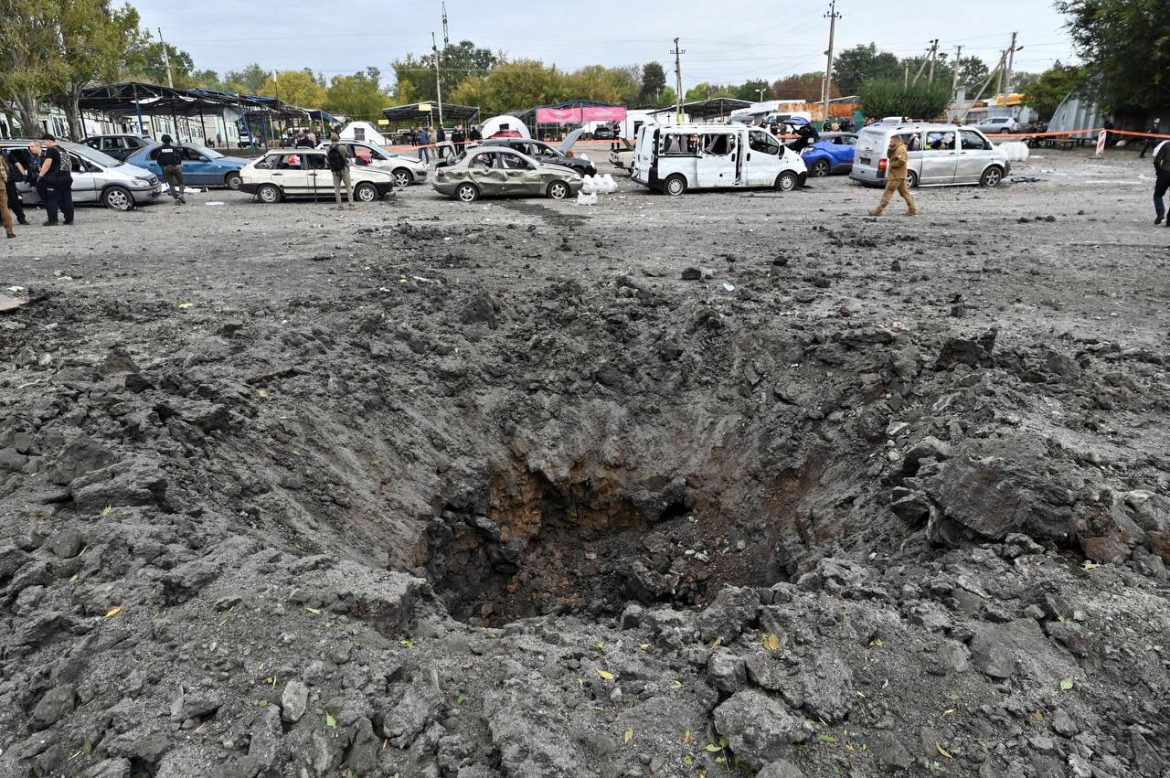 Kremlin forces pounded cities throughout Ukraine with missiles, rockets, and Iranian-supplied suicide drones hours ahead of a planned ceremony in which Russian President Vladimir Putin is expected to announce the annexation of four regions in Ukraine’s east and south.

One strike on a Ukrainian convoy of cars in Zaporizhzhia was reported to have killed 25 people and wounded at least 50.

The barrage followed analysts’ predictions that Putin would likely step up attacks as part of a new strategy to escalate the war following a series of humiliating defeats as a result of a Ukrainian counteroffensive that has tapered off in recent days. The attacks also point to Putin’s sense of urgency to speed up what he initially framed as a short-term “special military operation” in Ukraine amid a swell of anti-war sentiment from his citizens further fueled by his announcement of a military draft last week.

The annexations are to be touted as a major victory during an elaborate ceremony to be held in Russia’s Red Square today that reportedly includes a concert from a popular Russian pop band. But as Putin prepared his victory speech, he was dealt another punishing blow with the news that Ukrainian forces had encircled Lyman, the last major Russian stronghold in the north of the Donetsk province, trapping thousands of Russian troops.

Kyiv has been tight-lipped about the development; however, Russian military bloggers reported that Moscow’s forces there have been surrounded and that advancing Ukrainian troops have cut off all escape routes.

“Possible that the pocket collapses tonight or tomorrow, which would overshadow the annexation announcement,” tweeted Rob Lee, an expert on the Russian military and senior fellow at the Foreign Policy Research Institute.

The Washington-based Institute for the Study of War said the city’s fall to Ukrainian forces “is imminent,” unless Russia can quickly send in reinforcements, which appeared “highly unlikely.”

Putin’s annexation of the Russian-occupied areas of Donetsk, Luhansk, Kherson, and Zaporizhzhia comes after Kremlin troops made door-to-door sweeps in the regions, forcing citizens at gunpoint to vote and approve the referendums approving a Russin takeover. The West has fiercely condemned the land grab as a “sham” they refuse to recognize as legitimate. U.N. chief Antonio Guterres described the move as a “dangerous escalation” and a violation of the U.N. charter.

Guterres told reporters Thursday in New York that Russia’s annexation has “no legal value” and that it “must not be accepted.”

“Any decision by Russia to go forward will further jeopardize the prospects for peace,” Guterres said.

The U.S. and other Western leaders have promised to impose even more sanctions on Russia and have pledged more financial and military aid to Ukraine, with the U.S. alone providing an additional $1.1 billion in a new defense systems package.

Putin’s increasing desperation and renewed threats to use nuclear weapons to defend Russia against any Ukrainian efforts to retake territory have sparked global concern of a possible third World War.

Ukrainian President Volodymyr Zelenskyy spoke directly to the Russian people in his Thursday evening video address, telling them the war “can still be stopped. But to stop it we have to stop that person in Russia who wants war more than life. Your lives, citizens of Russia.”

The leader also had a message for Putin.

“The enemy rages and seeks revenge for our steadfastness and his failures,” he posted on his Telegram channel. “You will definitely answer for every lost Ukrainian life.”

Elsewhere, Russian authorities have been scrambling to set up enlistment offices along Russia’s borders in an apparent effort to intercept Russian men fleeing the country to avoid a military call-up.  Nearly 200,000 Russians so far have fled to safety in neighboring countries by plane, car, bicycle, and foot, sometimes waiting nearly 10 hours to cross into Georgia, Finland, Kazakhstan, and Mongolia to escape the draft announced by Putin last week.

Russian officials said they would hand call-up notices to all eligible men who were trying to leave the country.

This article was informed by Reuters and Associated Press reports.