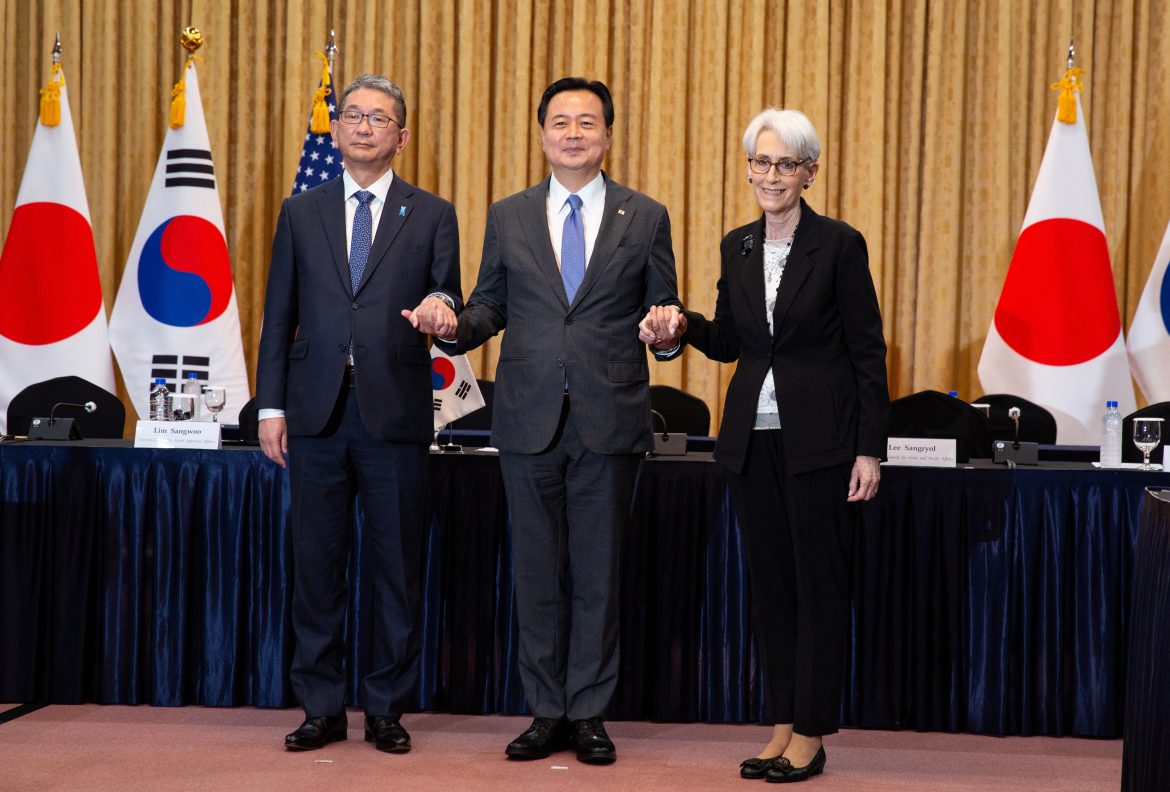 South Korea Vice Foreign Minister Cho Hyun-dong, U.S. Deputy Secretary of State Wendy Sherman and Japanese Vice Foreign Minister Takeo Mori made the comments as they gathered in Seoul, days after North Korea conducted the latest in a series of missile tests and signs of preparations for what would be its first nuclear test since 2017.

The three-way meeting of the countries’ No. 2 diplomats, the first such gathering since November and the first since South Korea’s President Yoon Suk-yeol took office in May, highlighted the urgency and gravity of North Korea’s intensifying weapons tests.

Mori’s visit also marked such trip by the Japanese vice foreign minister since late 2017 amid strained bilateral ties over issues including Japan’s occupation of the Korean peninsula and war-time labor.

The trio urged Pyongyang to abide by international sanctions and immediately cease actions that “escalate tensions or destabilize the region,” a joint statement said.

They also pledged to ramp up trilateral security cooperation to curb the North’s threats, with Sherman reaffirming the U.S. defense commitments, including extended deterrence.

“They stressed that a path to serious and sustained dialogue remains open and urged the DPRK to return to negotiations, while also expressing their hope that the DPRK will respond positively to international offers of assistance to fight against COVID-19,” the statement said, referring to North Korea by the initials of its official name, the Democratic People’s Republic of Korea.

North Korea has carried out at least 18 rounds of weapons tests this year, underscoring its evolving nuclear and missile arsenals.

The allies launched eight surface-to-surface missiles on Monday in their own show of force responding to the North’s test.

South Korea’s President Yoon Suk-yeol, who took office in May, and U.S. President Joe Biden vowed at their recent summit to deploy more U.S. strategic military assets as part of efforts to bolster the extended deterrence.

Yoon expressed serious concerns and vowed to sternly respond to the North’s illegal actions but said he would leave the door open for dialogue, his office said on Wednesday.

He made the comment during a video conference with Nguyen Phu Trong, chief of Vietnam’s Communist Party which has long ties with North Korea, asking him to help bring back Pyongyang to the negotiating table.

Seoul officials have said Pyongyang has conducted multiple experiments with a detonation device in preparation for its seventh underground nuclear explosion, which Sherman has said would trigger a strong and clear response.

The nuclear test could come as early as next week ahead of a planned plenary meeting of the ruling Workers’ Party’s powerful central committee, some analysts said.

“The meeting is primarily designed to review economy and other policy issues, but it could also touch on nuclear policy,” said Cheong Seong-chang, director of South Korea’s Sejong Institute’s North Korea studies center, referring to previous meetings held shortly after nuclear tests in 2013 and 2017.

“The United States remains prepared to meet the DPRK without preconditions and we iterate again, we have no possible intent toward the DPRK,” Sherman told a joint news conference.

Gun law negotiations creep along in Senate, but immediate end not in sight