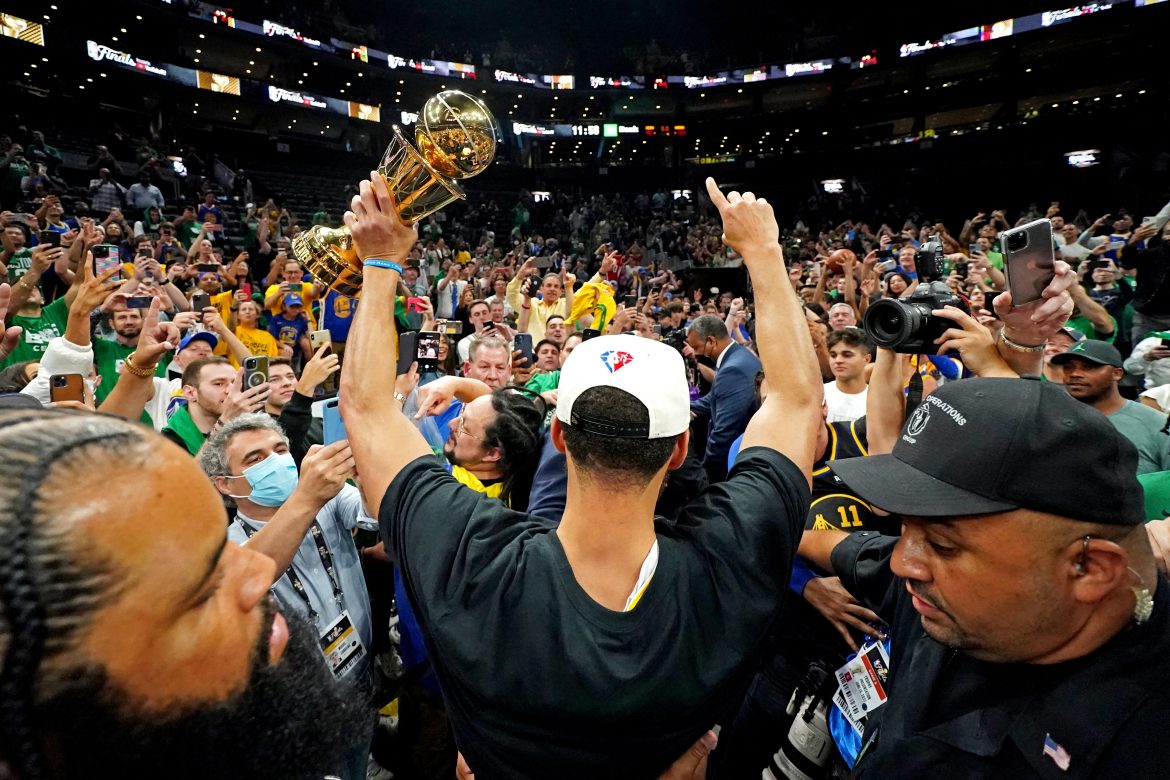 With tears of joy in his eyes, Stephen Curry pointed to the Lord as he summed his emotions after leading the Golden State Warriors to their fourth NBA championship in eight years.

“I’m so proud of our group. I thank God every day that I get to play this game at the highest level with some amazing people,” Curry said on the court. “This is what it’s all about.”

The NBA’s greatest 3-pointer shooter put on an amazing display in Game 6, scoring 34 points in Golden State’s 103-90 victory over the Boston Celtics on Thursday night at TD Garden.

He made six 3-pointers, including a couple deep shots. He drove to the basket at will, making Boston look foolish for letting center Al Horford defend him. He was scrappy, swatting balls away, dishing seven assists and grabbing seven rebounds.

“Finally got that bad boy,” Curry added. “It’s special. … Everybody mattered in that process.”

“I’m happy for everybody, but I’m thrilled for Steph,” Warriors coach Steve Kerr said during a champagne-soaked celebration in the locker room. “To me, this is his crowning achievement in what’s already been an incredible career.”

Curry is an eight-time All-Star, a two-time NBA MVP, a two-time scoring champion, All-Star Game MVP, four-time champion and now an NBA Finals MVP, by unanimous selection. He etched his spot in the Basketball Hall of Fame already. He’s also earned his way into the conversation for greatest player.

At age 34, Curry isn’t going anywhere anytime soon. He still has that drive to play at an elite level and win more titles.

“This one hits different for sure knowing what the last three years meant, what it’s been like,” Curry said. “Injuries, the changing of the guard, rosters, the young guys. … Now, we got four championships. Me, Dray, Klay and Andre.”

The first three rings came in 2015, 2017 and 2018, when Golden State made five consecutive trips to the finals. But the Warriors had to rebuild after losing to Toronto in the 2019 Finals. Kevin Durant tore his Achilles tendon in Game 5 and left for Brooklyn.  Thompson tore his ACL in the Raptors’ title-clincher in Game 6 and missed the next 2 1/2 seasons.

“It all paid off,” Thompson said of his long, arduous rehab process. “It was dog days, a lot of tears shed. You knew it was a possibility, but to see it in real time. It’s crazy.”

The Warriors denied Boston a record 18th NBA championship. Celtics star Jayson Tatum made the first two baskets of the game and had a rough night afterward. He finished with 13 points, only two in the second half when he played passive.

“It’s just tough getting to this point and not accomplishing what we want to,” Tatum said. “It hurts.”

The Celtics lost the final three games against Golden State, their first three-game losing streak since mid-December. They reached this point thanks largely to Tatum, who was voted first-team All-NBA for the first time in his career.

But the Warriors stifled him in the most important game of the season.

“One thing that he’s always done throughout the season was seeing multiple different coverages and figured it out. He did that throughout the first few series. This was a rough one,” Celtics coach Ime Udoka said. “Very consistent team that did some things to limit him and make others pay.”