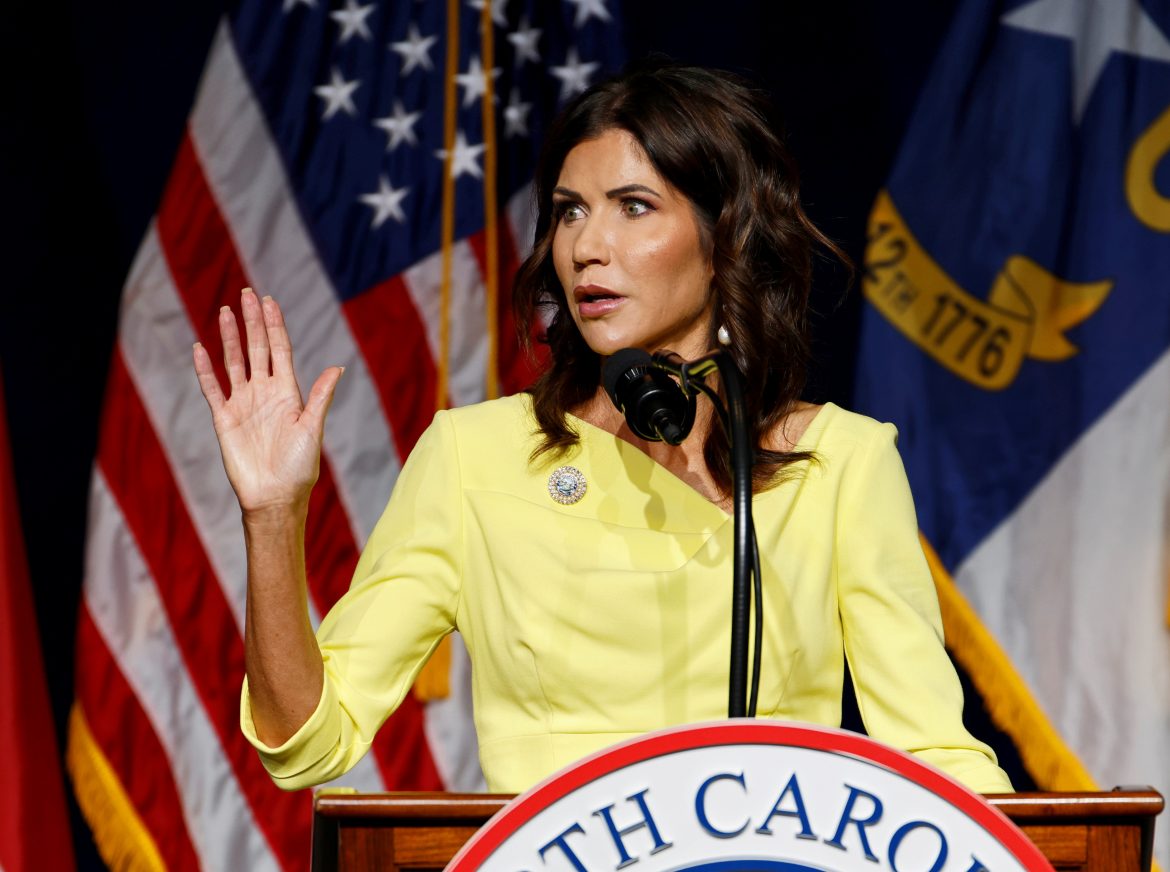 South Dakota is the second state to respond to Texas and Arizona’s request for aid in confronting the immigration crisis at the US-Mexico border. South Dakota governor Kristi Noem joined Florida Governor Ron DeSantis in sending law enforcement officers to Texas and Arizona on Tuesday. Noem released a statement saying that 50 South Dakota National Guard troops will be deploying to assist efforts at the border for a period of 30-60 days.

This announcement comes after Vice President Harris’s visit to El Paso. Harris had received substantial criticism for failing to visit the location of the crisis. Noem was sharply critical of Biden administration saying in her statement,

The Biden Administration has failed in the most basic duty of the federal government: keeping the American people safe. The border is a national security crisis that requires the kind of sustained response only the National Guard can provide.  We should not be making our own communities less safe by sending our police or Highway Patrol to fix a long-term problem President Biden’s Administration seems unable or unwilling to solve.  My message to Texas is this: help is on the way.

To @GregAbbott_TX & the great people of Texas, help is on the way. Tomorrow, I will announce that South Dakota will be sending up to 50 National Guard troops to Texas to secure our southern border, and help solve the human and national security crisis that @JoeBiden has created.

Governor Abbott of Texas tweeted his gratitude to Governor Noem as well,

Thank you for sending troops to help secure the border, Governor @KristiNoem.

Together we will keep our communities safe and help end this crisis. https://t.co/WY0HSxjxlJ

Governor Noem’s announcement comes the day before former President Trump is set to visit Texas and meet with the Texas governor. Noem is an up and coming Republican politician that many suspect will test ambitions for a 2024 presidential run.

Noem is also clashing with the White House after the National Park Service (NPS) recently forbid Fourth of July celebration activities to occur at Mount Rushmore which is located in South Dakota. Former President Trump had a large celebration last year and Governor Noem requested a permit for South Dakota to hold another celebration at the national monument this year. Noem told Fox News that the NPS denied her request and she believes the denial was political retribution:

We’re disappointed there won’t be fireworks here this year. At the last minute, when President Biden came into office, the National Park Service pulled our permit to host the fireworks… Our belief is truly that it was political. I believe that Biden administration pulled the fireworks from us to be punitive. They did not like us hosting it last year in the middle of COVID. They did not like the fact that President Trump was here celebrating with us, and that they had the ability to stop us from doing it this year. And they’re doing it for arbitrary reasons… They don’t want to celebrate America by honoring these founders on our mountain that led our country through challenging times. They have been taking down monuments across this country, and South Dakota has stood here and proudly held up our former leaders, recognizing that we can learn everything from everybody in the past that has led us. We never once said they were perfect, but we did say they were important to the foundation of this country, our freedoms and the constitution that still keeps America special… The Biden administration is trying to prevent us from recognizing how unique, special America is and from truly celebrating the honest history of this country.