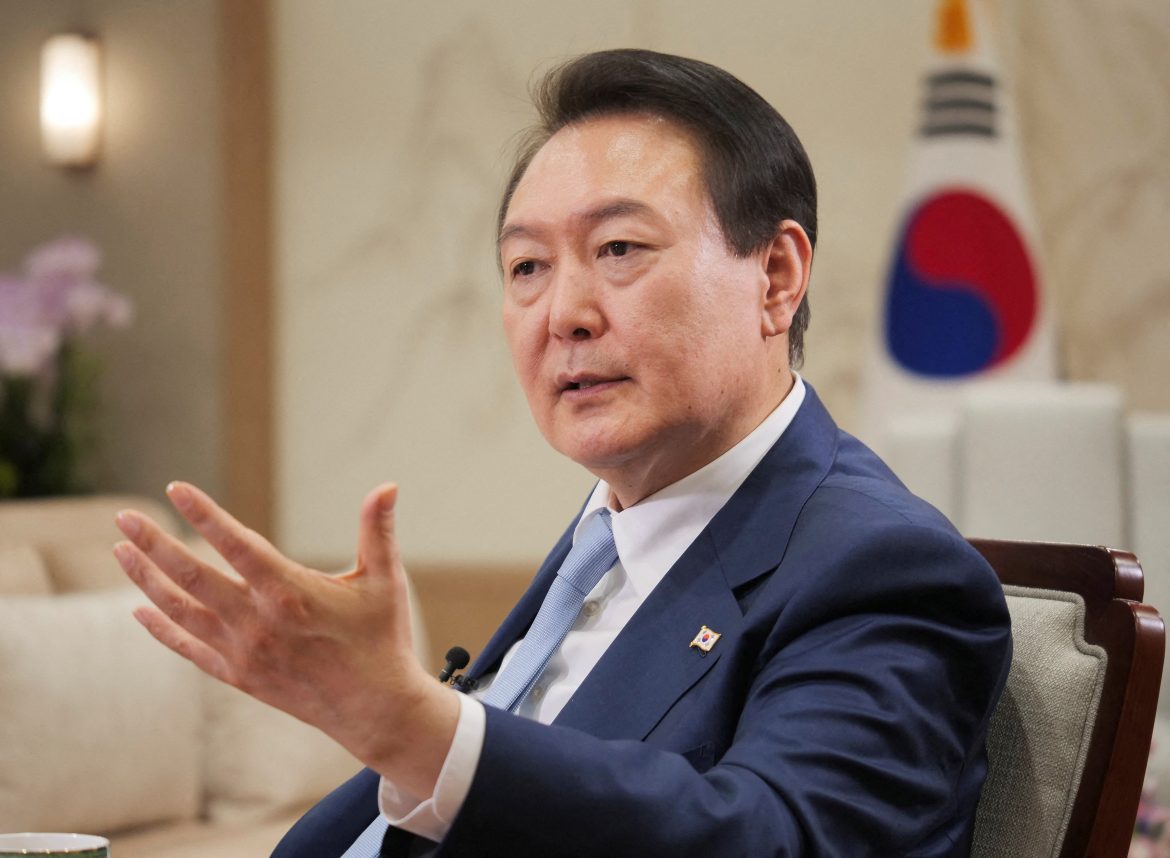 Yoon’s comments, in a newspaper interview published on Monday, come after he called for “war preparation” with an “overwhelming” capability, following a year marked by the North’s record number of missile tests, and the intrusion of North Korean drones into the South last week.

“The nuclear weapons belong to the United States, but planning, information sharing, exercises, and training should be jointly conducted by South Korea and the United States,” Yoon said in the interview with the Chosun Ilbo newspaper.

The newspaper quoted Yoon as saying the joint planning and exercises would be aimed at a more effective implementation of the U.S. “extended deterrence,” and that Washington was also “quite positive” about the idea.

The term “extended deterrence” means the ability of the U.S. military, particularly its nuclear forces, to deter attacks on U.S. allies.

A Pentagon spokesperson said: “We have nothing to announce today,” when asked about Yoon’s comments, adding that the alliance remains “rock-solid.”

Yoon’s remarks were published a day after North Korean state media reported that its leader Kim called for developing new intercontinental ballistic missiles (ICBMs) and an “exponential increase” of the country’s nuclear arsenal.

At a meeting of the ruling Workers’ Party meeting last week, Kim said South Korea has now become the North’s “undoubted enemy” and rolled out new military goals, hinting at another year of intensive weapons tests and tension.

Inter-Korean ties have long been testy but have been even more frayed since Yoon took office in May, promising a tougher stance on the North.

The North’s official KCNA news agency said the projectiles were fired from its super-large multiple rocket launcher system, which Kim said “has South Korea as a whole within the range of strike and is capable of carrying tactical nuclear warheads.”

The North’s race to advance its nuclear and missile programs has renewed debate over South Korea‘s own nuclear armaments, but Yoon said in the Chosun Ilbo interview that maintaining the Treaty on the Non-Proliferation of Nuclear Weapons remained important.

To better cope with the North’s growing threats, South Korea‘s military said on Monday it had established a new directorate under the Joint Chiefs of Staff to counter the North’s nuclear and weapons of mass destruction capabilities.

North Korea, meanwhile, conducted a reshuffle of its military leadership at the year-end party gathering, sacking Pak Jong Chon, the second-ranked military official after Kim, and replacing its defense minister and the chief of the army’s General Staff, according to state media.

The reason for Pak’s replacement was not immediately known, although Pyongyang regularly revamps its leadership and uses the party event to announce major personnel reshuffles.

Hong Min, a senior researcher at the Korea Institute for National Unification, said this year could be a “year of crisis” with military tension on the Korean peninsula going beyond 2017 when Pyongyang first test-fired an ICBM and also conducted its sixth nuclear test.

“North Korea‘s hardline stance…and aggressive weapons development when met with South Korea-U.S. joint exercises and proportional response could raise the tension in a flash, and we cannot rule out what’s similar to a regional conflict when the two sides have a misunderstanding of the situation,” Hong said.