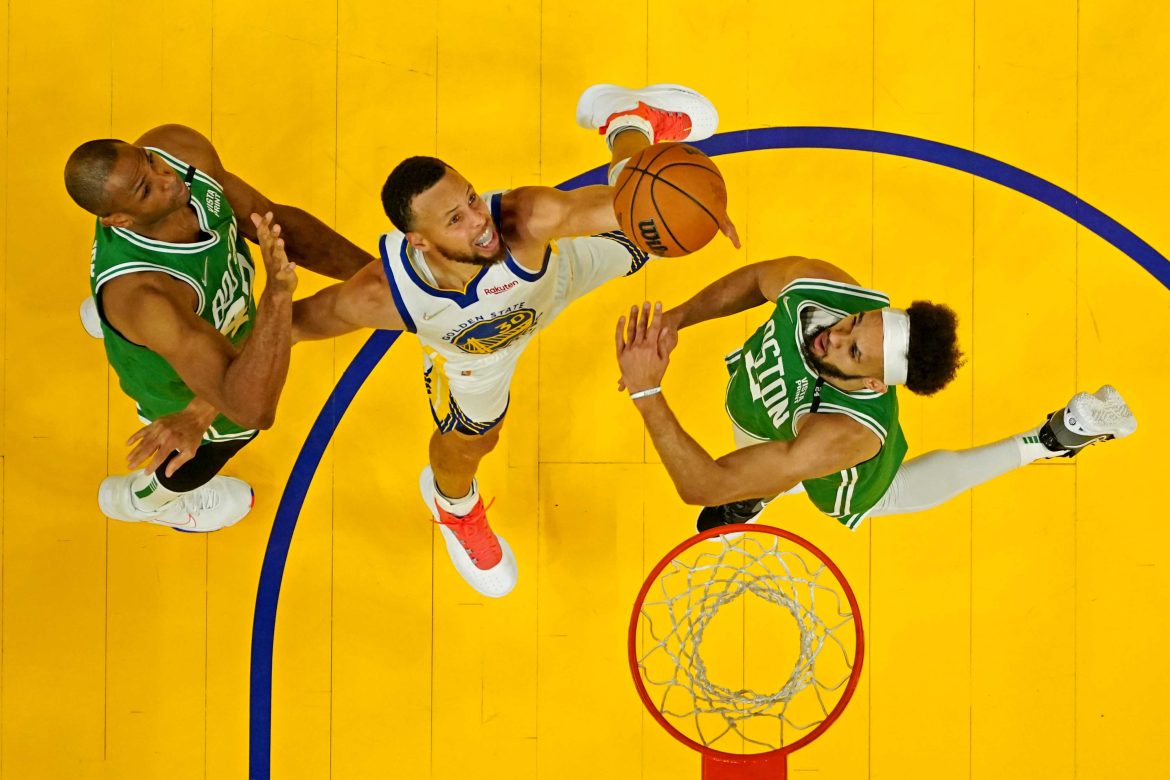 Steph Curry wears the Golden State Warriors’ logo on the front of his jersey. He lets the world know who he really plays for in a message on a blue bracelet on his left wrist.

The bracelet says: “In Jesus’ Name I Play.”

Curry, who has proudly worn that wristband for years, delivered when his team needed him most Sunday night in Game 2 of the NBA Finals. The eight-time All-Star and two-time NBA Most Valuable Player drained one shot after another on his way to 29 points, helping the Warriors defeat the Boston Celtics 107-88 and even their series at one game apiece.

“Steph was breathtaking in that quarter, not just the shot-making but the defensive effort,” Warriors coach Steve Kerr said. “He just doesn’t get enough credit for his level of conditioning, physicality and defense. People go at him to try to wear him down because they know how important he is to us offensively, and it’s pretty dramatic the difference in Steph’s strength and physicality in his body now than from eight years ago when I first got here. So, the guy’s amazing. He just keeps working on his game, his strength, his conditioning year after year, and it’s a pleasure to watch him play every night.”

For the 34-year-old Curry, the defensive performance comes down to simple effort.

“If you try hard, good things will happen,” he said.

The Warriors are seeking their fourth NBA championship in eight seasons. They are the first team to reach the Finals six times in that span since Michael Jordan led the Chicago Bulls to six titles from 1991-98.

There’s one accomplishment that has eluded Curry, the NBA’s all-time leading 3-point shooter: an NBA Finals MVP award. Andre Iguodala earned that honor when the Warriors won it all in 2015, and Kevin Durant got it 2017 and 2018, leaving Curry void in the category.

Still, there’s no mistaking that Golden State’s success starts and ends with Curry.

“Our offense is always a lot of Steph, it all starts with Steph,” Draymond Green said. “When KD was here, our offense still started with Steph. That’s the way it’s going to be.”

Curry credits his faith as a major factor in putting together a Hall of Fame career.

Curry said he went to church as a young kid and his parents, former NBA player Dell Curry and Sonya, are believers. During a youth service in eighth grade at the Central Church of God in Charlotte, North Carolina, Curry made the decision to accept the Lord.

On the inside of his right wrist, Curry has a tattoo of a 1 Corinthians 13:8. The verse says: “Love never fails.” Curry’s wife, Ayesha, has the same tattoo.

On his biceps, Curry has tattoos of symbols representing John 3:30. The verse says: He must become greater; I must become less.”

“I know why I play the game, and it’s not to score 30 points a night, but it’s to use the stage I’m on,” Curry has said. “I’ve been put here for a specific purpose: To be a witness and to share my testimony as I go through it.”