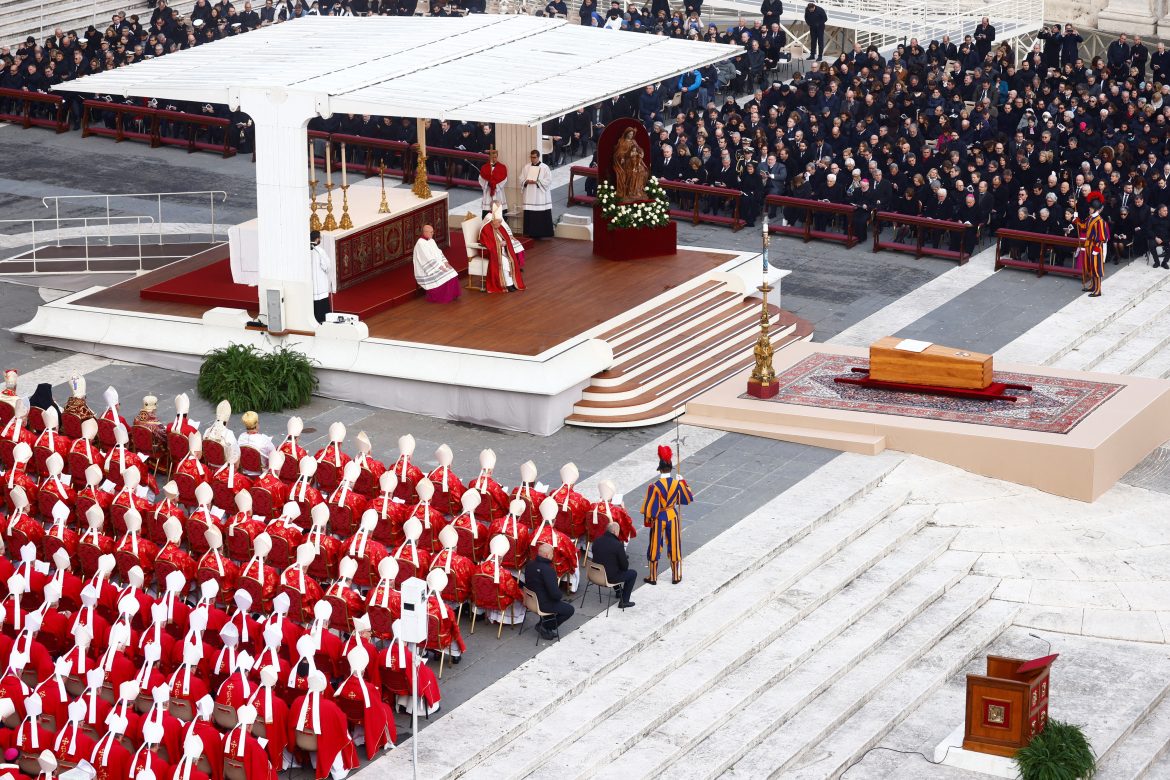 Pope Francis led the funeral of former Pope Benedict on Thursday, tenderly touching the coffin of his predecessor as he stood supported on a cane before tens of thousands of mourners, with some calling for the late pontiff to be made a saint.

Benedict’s death on Saturday brought to an end a decade of the former and present pope living side-by-side in the Vatican and it was the first time in more than 200 years that a pontiff had led the service for his predecessor.

His death was a loss for conservatives who yearned for a return to a more traditional Church symbolized by Benedict, who shocked the world in 2013, by becoming the first pope in 600 years to resign instead of reigning for life.

At the end of the funeral in St. Peter’s Square, some people shouted in Italian “Santo Subito!” (Make him a saint now!). It was the same phrase used at the funeral of Pope John Paul II in 2005, although by many more people then.

Three of the last five popes have been made saints, but only around a third of all pontiffs have been canonized in the Church’s 2,000-year history.

While many leading figures have praised Benedict since his death, criticism has also been aired, including by victims of clergy sexual abuse, who have accused him of seeking to protect the Church at all costs

Francis, who sat for most of the service because of a knee ailment, including while he read the homily, in which he only mentioned Benedict by name once at the service attended by 50,000 people in a fog-shrouded square.

He rose at the end as Benedict’s coffin was being carried away for a private burial inside St. Peter’s Basilica. Bowing his head in silent prayer, Francis briefly touched the casket.

At 86, Francis, who has been using a wheelchair but has shown no signs of slowing down, with trips planned for Africa and Portugal in the coming months, is a year older now than Benedict was when he retired.

Francis himself has made clear that he would not hesitate to step down someday if his mental or physical health prevented him from carrying out his duties, but Vatican officials always doubted he could do this while Benedict was still alive.

An account of Benedict’s papacy, along with other items, including Vatican coins minted during his reign, was tucked into his coffin. The account, written in Latin, says Benedict “fought with firmness” against sexual abuse by clergy in the Church.

Even though Benedict largely avoided public appearances after his resignation, he remained a standard-bearer for Catholic conservatives, who felt alienated by reforms ushered in by Francis, including cracking down on the old Latin Mass.

After the service, the coffin was wrapped in red ribbons in the form of a cross. Workers later put it in a zinc casket and soldered that shut, Vatican pictures showed. Both were then put into a wooden casket, which was lowered into a crypt.

People from all over the world, many from Benedict’s native Germany, had arrived in the early hours to say farewell, including a few heads of state and some European royals.

“It is a sad but meaningful day. I wanted to be here so much that I can feel it in my heart,” said an Italian woman who gave only her first name, Marianna.

Dorotea Dadaeki, a Rwandan woman living in Rome, said: “I told myself that I had to come and attend holy Mass to accompany him in prayer.”

Xavier Mora, 24, a Spaniard preparing for the priesthood, said he had studied Benedict’s theology and had “great affection and esteem for him”.

About 200,000 people filed past Benedict’s body while it was lying in state for three days until Wednesday evening.

The service started when, to the sound of tolling bells, 12 pallbearers carried the coffin holding Benedict’s remains out of the basilica and placed it on the ground before the largest church in Christendom. Bells also tolled in German cities.

The last time a reigning pope had presided over the funeral of a predecessor was in 1802, when Pius VII led the service for Pius VI, whose body returned to the Vatican after he died in 1799 in exile.

In his homily, Francis used more than a dozen biblical references and Church writings in which he appeared to compare Benedict to Jesus, including his last words before he died on the cross: “Father, into your hands I commend my spirit.”

During the Mass concelebrated by 125 cardinals, 200 bishops, and about 3,700 priests, Francis spoke of the “wisdom, tenderness and devotion that he bestowed upon us over the years”.

He mentioned Benedict in the last line, saying: “Benedict, faithful friend of the Bridegroom,(Jesus) may your joy be complete as you hear his voice, now and forever!”

At his request, Benedict was buried in the underground Vatican grottoes in the niche where first Pope John XXIII and then John Paul II were interred before their remains were transferred to more prominent places in the basilica above.