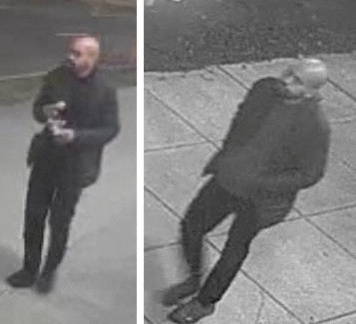 A lone gunman was sought by police on Monday in five shootings – two of them fatal – of homeless men sleeping on the streets of New York and Washington, D.C., over the past two weeks after security cameras captured his image.

The first three shootings targeted victims in Washington, followed by two shootings in New York, police in the two cities said in a joint statement. One victim in each city was killed.

Police are asking the public for help identifying a man with a shaved head and a goatee seen in surveillance video.

NYPD officers are working tirelessly to bring the person responsible for the murders of two of our most vulnerable New Yorkers to justice. They’re connecting with those in need of services, searching block-by-block, and in contact with @DCPoliceDept partners. We will find him. https://t.co/pjg5xaMSB1 pic.twitter.com/8mupAcWlfy

The violence, which took place overnight in northeast Washington, D.C., and in lower Manhattan, comes amid a spate of seemingly random attacks in New York City.

In two of the most recent incidents, a man leaped over a reception counter at the Museum of Modern Art on Saturday and stabbed two employees, while earlier last week an individual bashed a subway rider’s head with hammer.

The attacks on the homeless started March 3 at about 4 a.m. when Washington’s Metropolitan Police officers were alerted to sounds of gunshots on New York Avenue. The victim was rushed to a local hospital for treatment of non-life threatening injuries.

Five days later on March 8, police found a man suffering from gunshot wounds. He was transported to a local hospital for treatment of non-life threatening injuries.

The following day, police spotted a tent fire on New York Avenue. After it was extinguished, authorities found the remains of a man whose cause of death was later determined to be multiple stab and gunshot wounds, police said.

Three days later, in New York City’s lower Manhattan on Saturday afternoon, a 38-year-old man was shot in the arm while sleeping on King Street near Varick Street.

A short time later, police responding to a 911 call about a man suffering from gunshot wounds to the head and neck found the victim dead inside a sleeping bag on Lafayette Street.

In a possible sixth incident on Sunday evening, a 43-year-old man was found dead after police were called to Greenwich and Murray streets.

The New York Police Department said he had an “injury to his right leg” but did not immediately respond to Reuters questions about whether the dead man had any gunshot wounds and whether his death was being investigated for a possible link to the gunman.

The cause of death was under investigation by the medical examiner’s office, which did not immediately respond to Reuters questions about when the autopsy would be completed.

A Moment In History: Daylight Savings