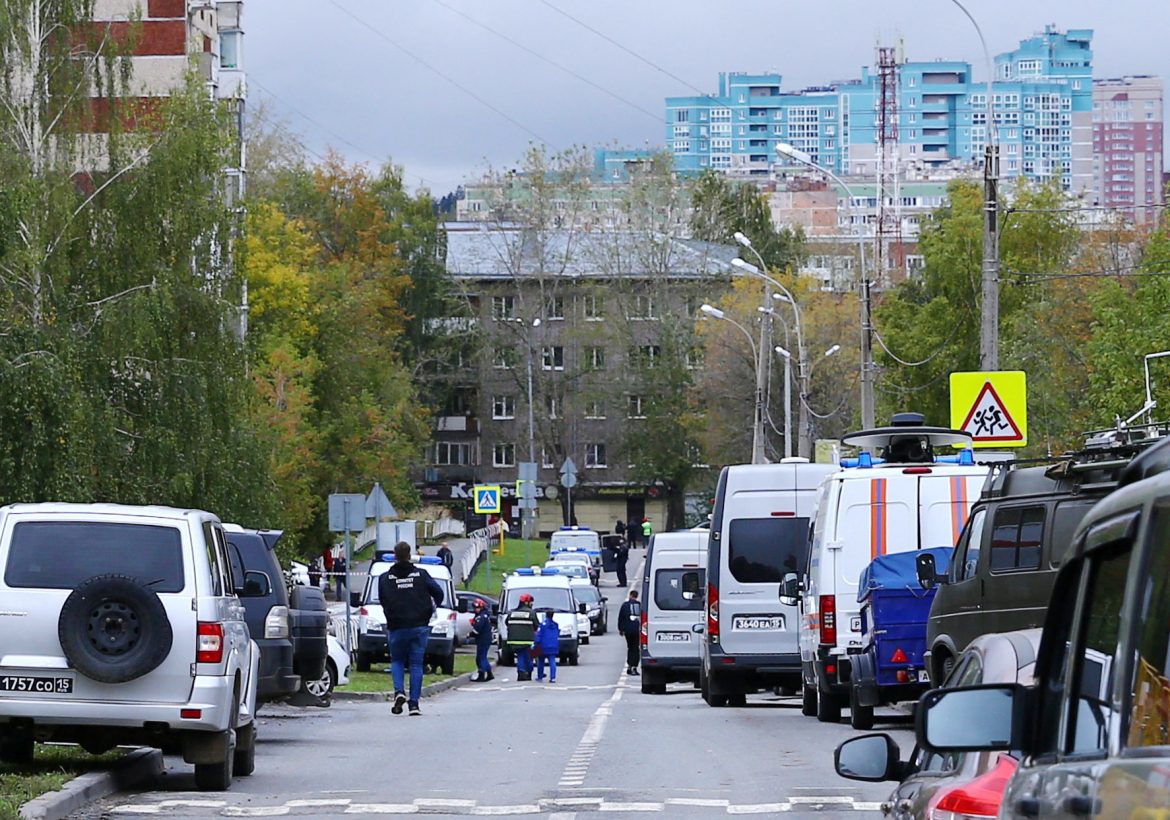 A gunman with a swastika on his teeshirt killed 15 people, including 11 children, and wounded 24 at a school in Russia on Monday before committing suicide, investigators said.

The attacker, a man in his early thirties who was named by authorities as Artem Kazantsev, killed two security guards and then opened fire on students and teachers at School Number 88 in Izhevsk, where he had once been a pupil.

“Currently investigators…are conducting a search of his residence and studying the personality of the attacker, his views and surrounding milieu,” the committee said in a statement. “Checks are being made into his adherence to neo-fascist views and Nazi ideology.”

Investigators released a video showing the man’s body lying in a classroom with overturned furniture and papers strewn on the bloodstained floor. He was dressed all in black, with a red swastika in a circle drawn on his teeshirt.

The Investigative Committee said that of the 24 people wounded, all but two were children. Regional governor Alexander Brechalov said surgeons had carried out a number of operations.

He said the attacker had been registered with a “psycho-neurological” treatment facility. Investigators said the man was armed with two pistols and a large supply of ammunition.

Kremlin spokesman Dmitry Peskov said President Vladimir Putin “deeply mourns” the deaths. He described the incident as “a terrorist act by a person who apparently belongs to a neo-fascist organization or group”.

He said doctors, psychologists, and neurosurgeons had been sent on Putin’s orders to the location of the shooting in Izhevsk, about 600 miles east of Moscow.

In May 2021, a teenage gunman killed seven children and two adults in the city of Kazan. In September last year, a student armed with a hunting rifle shot dead at least six people at a university in the Urals city of Perm.

In April 2022, an armed man killed two children and a teacher at a kindergarten in the central Ulyanovsk region before committing suicide.

In 2018, an 18-year-old student killed 20 people, mostly fellow pupils, in a mass shooting at a college in Russian-occupied Crimea, which Moscow seized from Ukraine in 2014.