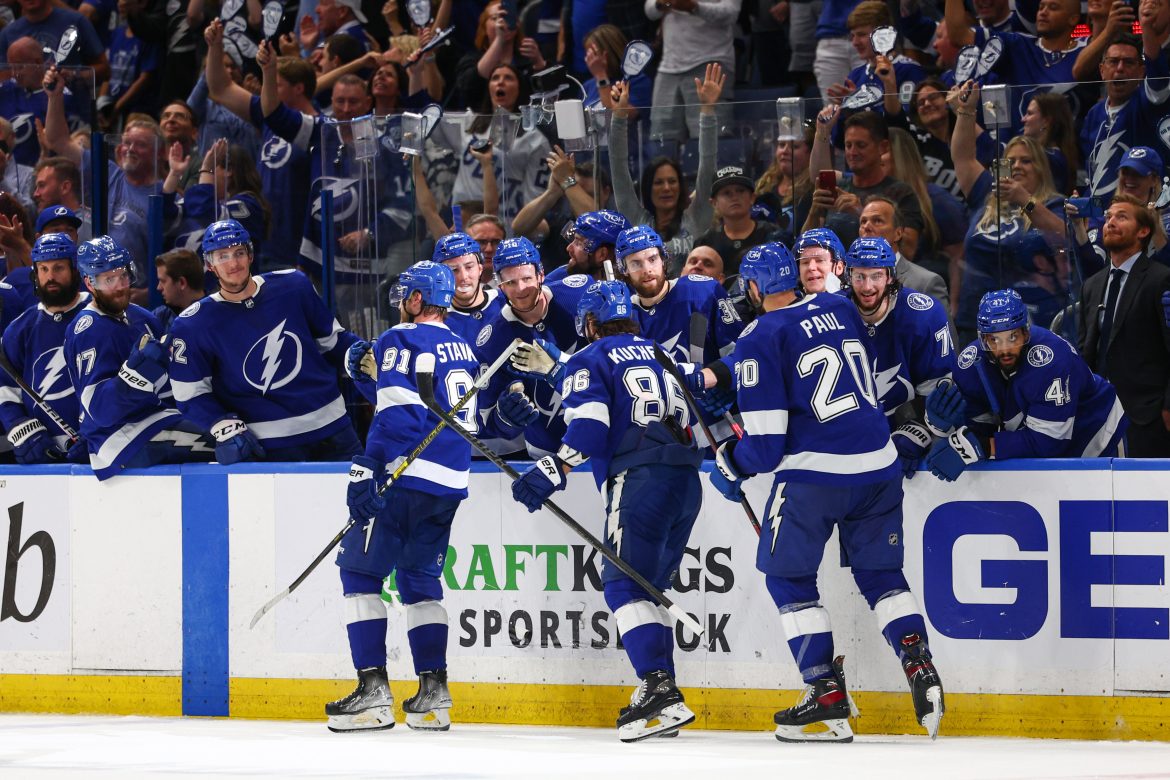 While the Colorado Avalanche rest, the Tampa Bay Lightning and New York Rangers are locked in a battle to advance to the Stanley Cup Finals.

The two-time defending champion Lightning have fought back from a 2-0 series deficit after trailing 2-0 in Game 3 and evened the best-of-seven series at 2 games apiece with a convincing 4-1 victory at home Tuesday night.

Nikita Kucherov scored on a breakaway, and captain Steven Stamkos, Ondrej Palat, and Pat Maroon also had goals for the Lightning, who are seeking to become the first NHL team to three-peat as champions since the New York Islanders won four straight Cups from 1980-83.

“We’ve got ourselves squared up in this series. It’s great, much better than the position we were in a couple days ago. But this is where it gets down to the really tough stuff,” Stamkos said. “These next couple of games, we have to go on the road, and we have to find a way to win a game in their barn. We’re looking forward to that challenge, but I really like where our game is now compared to where it was a couple days ago.”

The series returns to Madison Square Garden for Game 5 on Thursday night. The Rangers won the first two at home and are 8-1 this postseason in Manhattan. Game 6 is Saturday night in Tampa.

“I don’t think we expected to walk in here and blow the doors off the thing,” Rangers defenseman Jacob Trouba said. “This is competitive hockey. This is a really good team that we’re playing, and these are going to be hard games. They were close games. It’s the best of three in the Eastern Conference final; it’s something to be excited about as a group. We’re in a pretty good spot here, and we’re going to go home and do what we can to win a game.”

Meanwhile, the Avalanche await an opponent after sweeping four straight games from the Edmonton Oilers in the Western Conference Finals. The extra time off could help Colorado get some injured players back on the ice. Starting goaltender Darcy Kuemper returned to the lineup as a backup to Pavel Francouz for Game 4 against the Oilers after missing two games with a lower-body injury sustained in Game 1.

“It’s a battle of attrition,” Avalanche coach Jared Bednar said. “No one gets through it without suffering a bunch of ups and downs and ebbs and flows to series, to injuries, facing adversity, and it seems that the teams that get through that the best are usually the ones that are standing at the end — or at least getting in the finals.”

Lightning goalie Andrei Vasilevskiy was at his best in Game 4, making 33 saves. Vasilevskiy was unfazed when Rangers forward Frank Vatrano crashed into him in the net midway through the second period. That led to a rare playoff fight between Vatrano and Lightning forward Brandon Hagel, who didn’t appreciate seeing his teammate go down in the collision.

“I cross-checked him a little bit after the whistle and he said: ‘Let’s go,'” Hagel said. “So, say less.”

The 27-year-old Vasilevskiy has started every playoff game during Tampa’s championship run, going 44-19. After winning the Vezina Trophy in 2019, Vasilevskiy credited his faith for his success.

He said praying is one of his pregame routines and he has worn an image of God on his mask.

“In church, I find myself,” said Vasilevskiy, who is from Russia.

NHL players are more private about their faith than most athletes but plenty of Christians have made a huge impact on the ice, including Montreal Canadiens seven-time All-Star goalie Carey Price and former Ottawa Senators and Nashville Predators center Mike Fisher, who is married to Carrie Underwood.