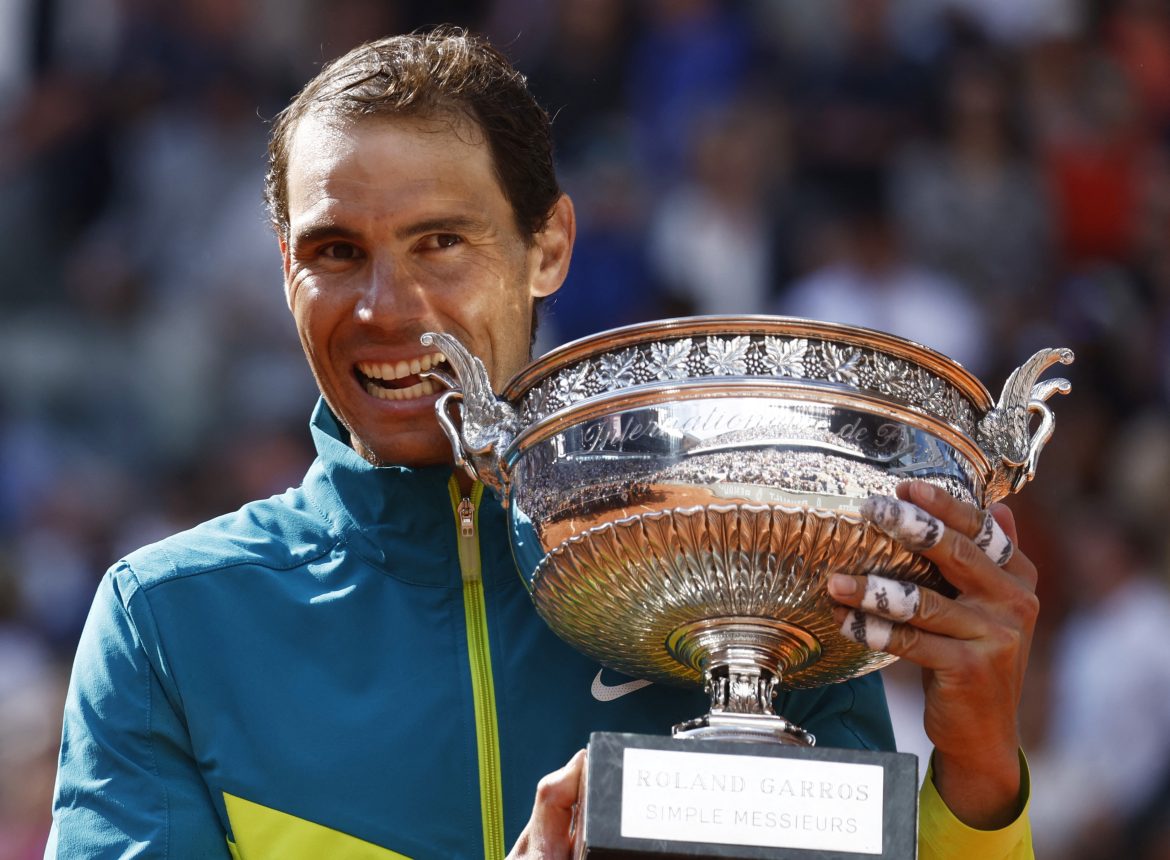 Rafael Nadal brutally crushed Casper Ruud on Sunday to lift a record-extending 14th French Open trophy and increase his lead at the top of the list of men’s Grand Slam champions.

There was a sense of deja vu as the Spaniard, who turned 36 on Friday, swept aside Norwegian Ruud 6-3 6-3 6-0 on a balmy afternoon in Paris to ensure he has won every time he has reached the final at the clay court Grand Slam.

By lifting the Musketeers’ Cup again, Nadal was halfway through the calendar Grand Slam for the first time in his career after he won the year’s opening major at the Australian Open.

Victory gave Nadal a record-extending 22nd Grand Slam title and put him two clear of world number one Novak Djokovic of Serbia and Swiss Roger Federer in the men’s race for the most major titles.

Similar to his leadup to the Melbourne Park major, Nadal arrived at Roland Garros with persistent fitness doubts after suffering a rib stress fracture and a chronic foot injury.

But Nadal, who passed fellow Spaniard Andres Gimeno as the oldest Roland Garros men’s singles champion, again proved that even at less than 100% he is still a mountain too steep to conquer on the red clay of Roland Garros.

He got a standing ovation as he walked onto Court Philippe Chatrier under overcast skies as fans livened up the atmosphere with drums and trumpets.

The Spaniard, who has a statue erected in his honor at the clay court arena in Western Paris, kickstarted the party early for his fans.

Nadal and Ruud had never played a competitive match before Sunday, but the duo have hit together plenty of times at the Spaniard’s academy in Mallorca and the Norwegian said he has never won a practice set against his idol.

The record will stay the same after Sunday in Favour of Nadal who is 13 years older than the Norwegian.

Ruud has led the men’s Tour since the start of the 2020 season in clay court wins, finals and titles and was the first man from his country to make a Grand Slam singles final but he did not have enough in his armory to challenge Nadal.

Nadal made a blistering start, racing to a 2-0 lead with a superb forehand passing shot securing his first break of Ruud’s serve.

But despite all his experience at the clay court Grand Slam, there were still nerves for the Spaniard as he frittered away his early advantage with two unforced errors off his forehand and two double faults.

Nadal’s vicious top-spin forehand, however, soon found its range and he started applying pressure to Ruud’s backhand to secure a break and canter to a 4-1 lead.

The Norwegian showed off his much-acclaimed forehand but it was not enough to stop Nadal from winning the opening set.

Ruud raised his level at the start of the second, saving three break points to hold serve in the opening game and earned praise from his opponent when he charged down the length of the court to reach a drop shot to turn it into a winner.

The Norwegian soon broke Nadal to love to take a lead for the first time in the match but it proved short-lived as Nadal wiped out his advantage in the next game.

From 3-1 down, Nadal won the next five games to put himself a set away from victory.

Ruud’s hopes of stretching the contest disappeared quickly with the left-hander now fully in the mood to put on a show, and it was one-way traffic as Nadal reeled off 11 games in a row stretching over the second and third sets.

He put Ruud out of his misery on his second championship point with a backhand winner down the line, ending the contest in two hours and 18 minutes.

Biden on track to out-vacation every other president