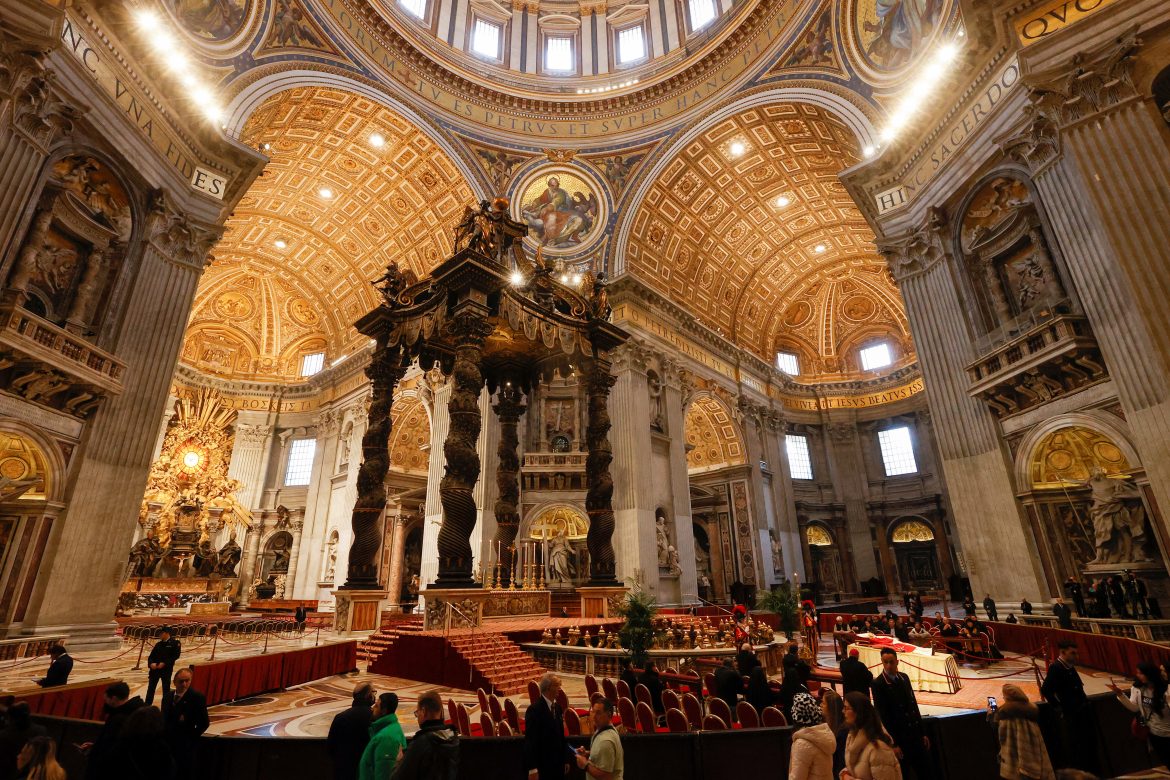 A steady stream of tens of thousands of people filed into St. Peter’s Basilica on Monday to pay their respects to former Pope Benedict XVI, whose body was laying in state without any papal paraphernalia ahead of his funeral this week.

Benedict, a hero to some conservative Catholics who yearned for a return to a more traditional Church, died on Saturday at the age of 95 in the secluded Vatican monastery where he had lived since 2013, when he became the first pope in 600 years to resign.

“I feel like he was a grandfather to us,” Veronica Siegal, 16, a Catholic high school student from Baton Rouge, Louisiana, who is in Rome for a program of religious study, told Reuters in St. Peter’s Square after viewing the body.

She said she had read one of Benedict’s books on Jesus for one of her courses.

“I know that he is in a better place because he was a holy man and he led so well,” said her classmate, Molly Foley, also 16, from Atlanta, Georgia. A third girl in the group wore an American flag on her back.

Security was tight, with visitors going through several checkpoints before entering the basilica. Many stopped to pray after viewing the body or stayed to attend Mass in side chapels.

Vatican police said that in the first five hours, 40,000 people had filed past.

Benedict’s body, dressed in red and gold liturgical vestments and placed on a simple dais, was moved in a procession just before dawn through the Vatican Gardens from the monastery to a spot in front of the main altar of Christendom’s largest Church.

Two Swiss Guards stood at attention on either side of the body, which bore no papal insignia or regalia, such as a crosier, the silver staff with a crucifix, or a pallium, a band of cloth worn around the neck worn by archdiocesan bishops.

Both were on Pope John Paul’s body when it lay in state in 2005.

It was not clear if the pastoral cross or any other items he used will be buried with him but the decision not to have them during the public viewing appeared to have been decided to underscore that he no longer was pope when he died.

Vatican spokesman Matteo Bruni said Benedict will be buried according to his wishes in the same spot in the crypts under St. Peter’s Basilica where Pope John Paul II was originally interred in 2005 before his body was moved up to a chapel in the basilica in 2011.

Before the Church was opened to the public, Italian President Sergio Mattarella and Prime Minister Georgia Meloni were the first outsiders to pay their respects.

Benedict’s closest aide, Archbishop Georg Ganswein, sat in the first pew to the side of the body along with Benedict’s household and medics who looked after him in his final days.

After a few hours, they rose to pray before the body. Ganswein stayed behind to receive condolences from visitors.

“I had to come,” Sri, a woman visiting from Jakarta, Indonesia, told Reuters. “He was the pope and I am a Catholic,” she said, declining to give her surname.

Benedict will lie in state until Wednesday evening. His funeral will be held on Thursday in St Peter’s Square and be presided over by Pope Francis. The Vatican has said it will be a simple, solemn, and sober ceremony in keeping with Benedict’s wishes.

The Vatican has painstakingly elaborate rituals for what happens after a reigning pope dies but none for a former pope, so what happens in the next few days could become the template for future ex-popes.

Bruni said the details of the funeral Mass were not yet completed.

While the number of visitors was large, there were no signs of the huge crowds who came to pay their respects to Pope John Paul II, when millions waited for hours to enter the basilica.