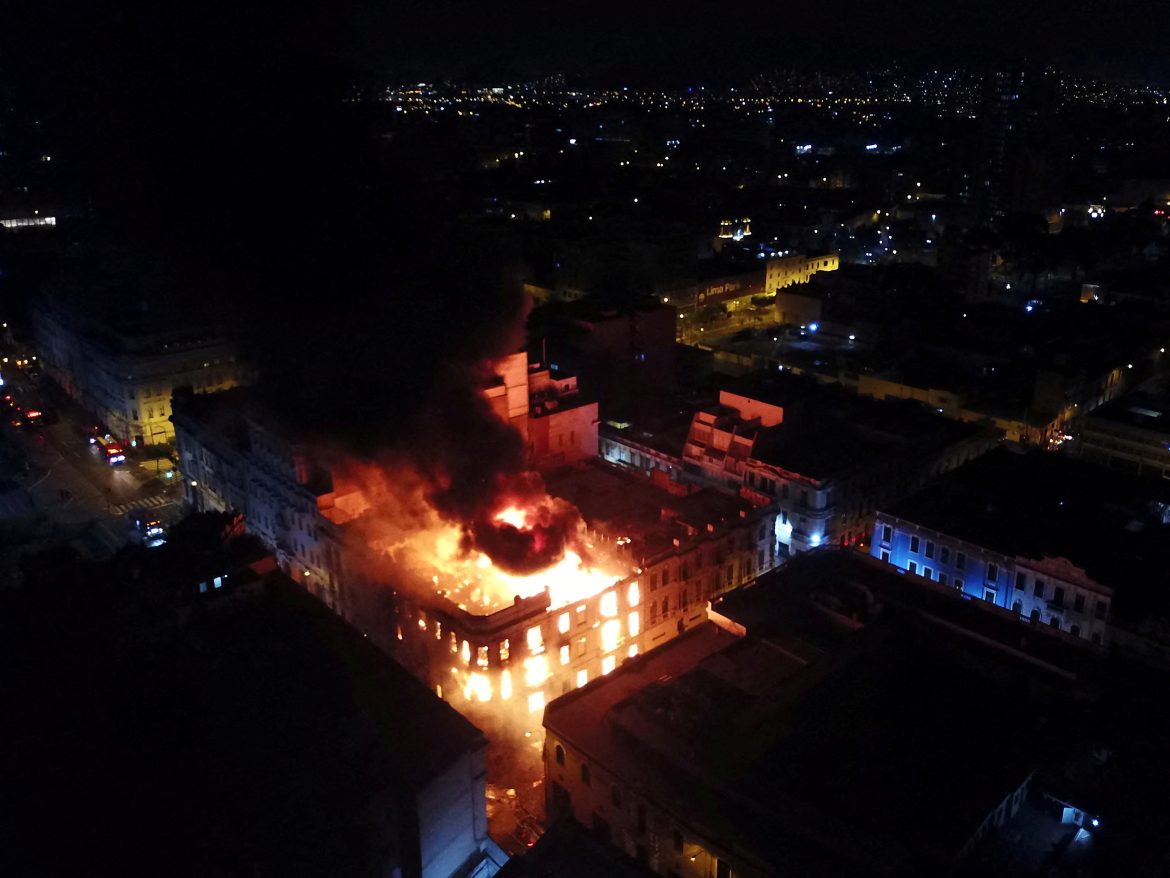 Thousands of protesters in Peru, many from the country’s heavily indigenous south, descended on Lima, the capital, on Thursday, angered by a mounting death toll since unrest erupted last month and calling for sweeping change to the leftist federal government.

Police estimated the march at around 3,500 people, but others speculated it attracted more than double that.

Rows of police in riot gear faced off against rock-hurling protesters on some streets, and one historic building in the city’s historic center caught fire late on Thursday.

The building, on San Martin Plaza, was empty when the massive blaze ignited from unknown causes, a firefighter commander told local radio.

Canada-based miner Hudbay said in a statement that protesters had entered the site of its Peru unit, damaging and burning key machinery and vehicles.

“This has not been a protest; this has been a sabotage of the rule of law,” Prime Minister Alberto Otarola said Thursday evening alongside President Dina Boluarte and other government ministers.

A MONTH OF DEADLY PROTESTS

Over the past month, raucous and sometimes deadly protests have led to the worst police violence Peru has seen in more than two decades, as many in poorer, rural regions vent anger at the Marxist Lima establishment over rising prices, testing the copper-rich Andean nation’s democratic institutions.

Protesters are demanding the resignation of Boluarte, snap elections and a new constitution.

“We want the usurper Dina Boluarte to step down and call for new elections,” said protester Jose De la Rosa, predicting the street protests would only continue.

The protests have been sparked by the dramatic Dec. 7 ouster of leftist former President Pedro Castillo after he tried to illegally shutter Congress and consolidate power.

In buses and on foot, thousands journeyed to Lima on Thursday, carrying flags and banners blasting the government and police for deadly clashes in the southern cities of Ayacucho and Juliaca.

The unrest spread far beyond the capital.

In southern Arequipa, police fired tear gas at hundreds of protesters who tried to take over the airport, local television showed, leading officials to announce the suspension of operations at the Arequipa and Cusco airports.

Boluarte said on Thursday evening that the airports, as well as one in the southern city of Juliaca, had been attacked “in a concerted manner.”

“All the rigor of the law will fall on those people who have acted with vandalism,” Boluarte said.

The mounting death toll stands at 45, according to the government ombudsman, with the latest victim on Thursday coming from the southern Puno region, a woman who succumbed to injuries from a day earlier. Another nine deaths are attributed to accidents related to protest blockades.

Across the nation, road blockades were seen in 18 of the country’s 25 regions, according to transport officials, underscoring the reach of the protests.

Last week, the embattled Boluarte government extended a state of emergency in Lima and the southern regions of Puno and Cusco, curtailing civil rights.

President Boluarte said the situation in the country was “under control,” contrary to seemingly all evidence. She called for dialogue.

The president has asked for “forgiveness” for the protest deaths, even as protester banners label her a “murderer” and call the killings by security forces “massacres.” She has dismissed calls to resign.

Human rights groups have accused the police and army of using deadly firearms in the protests. The police say the protesters have used weapons and homemade explosives.

“We won’t forget the pain the police have caused in the town of Juliaca,” said one protester traveling to Lima, who did not give her name. She referred to the city where an especially deadly protest took place this month. “We women, men, children have to fight.”

Other protesters pointed to strategic reasons for targeting the coastal capital.

“We want to centralize our movement here in Lima, which is the heart of Peru, to see if they are moved,” said protester Domingo Cueva, who had traveled from Cusco.

“We have observed an increase in repressions everywhere,” he added.