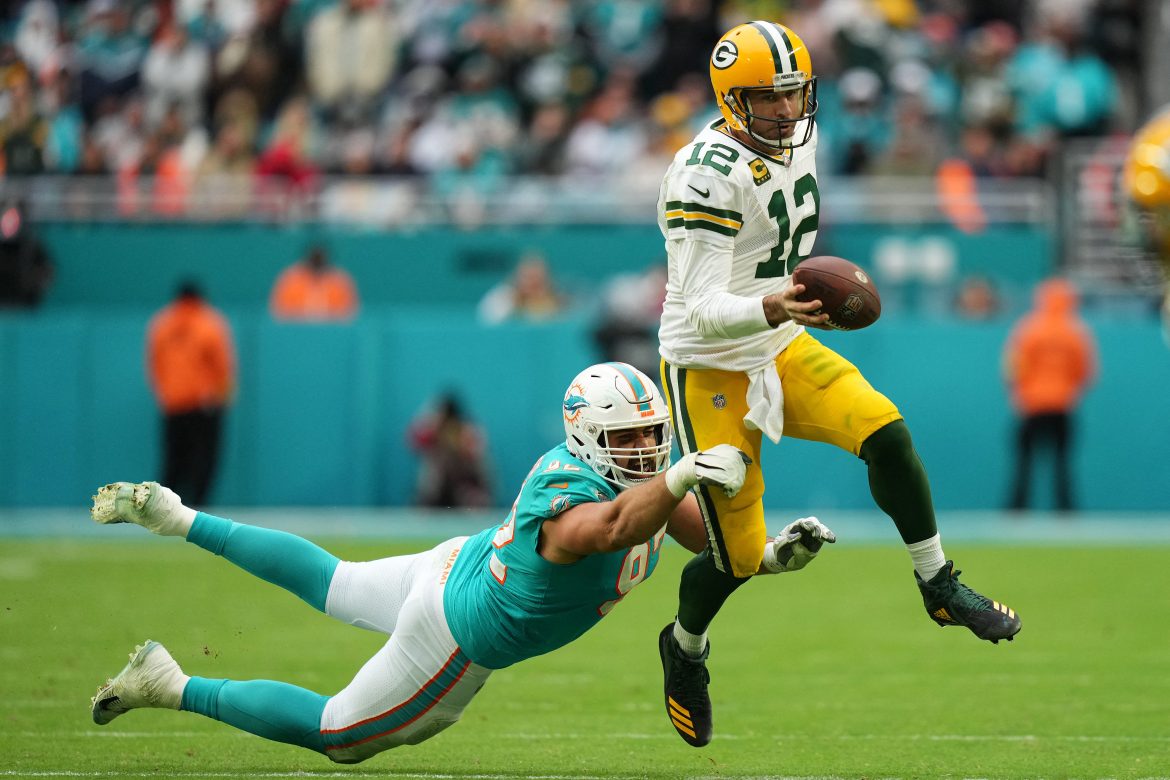 Rodgers led the Packers to a 26-20 victory over the Miami Dolphins on Sunday, keeping Green Bay in the NFC playoff race with its third straight win.

Brady capped off Christmas Day by engineering another comeback win, leading the Tampa Bay Buccaneers to a 19-16 overtime victory over the Arizona Cardinals.

The Packers have fought back from a 4-8 start to put a wild-card berth within grasp. They can make the playoffs by winning their final two games against Minnesota and Detroit and if Washington (7-7-1) loses one game or the New York Giants (8-6-1) lose two.

“I don’t think we’ve struggled with confidence. But definitely haven’t had a lot of believers outside the locker room I think,” Rodgers said. “So maybe this will give us a couple on the bandwagon. We’ve been in a good rhythm, practice, energy, cohesion, and playing a little bit better complementary football. It wasn’t perfect, but that’s a good football team and they had a lot to play for. It’s a good win for us.

The defense stepped up for the Packers against Miami, which has lost four in a row but remains in a wild-card position in the AFC. Green Bay intercepted Tua Tagovailoa three times in the fourth quarter to hold on for the win after trailing 20-10 late in the first half.

“I would say it’s easy to keep the confidence up with this group,” Tagovailoa said. “I think we all believe in each other. I would say we all love one another. We’re all invested into each other as well. I don’t think it’s a time for us to blink. Like we just move on and we learn from it. We’ve got another tough team that we’ve got to go to and play.”

The Dolphins can secure a playoff berth by winning their final two games against New England (7-8) and the New York Jets (7-8).

The Buccaneers trailed Arizona 16-6 in the fourth quarter before Brady led them back. He tossed a 3-yard touchdown pass to Rachaad White to cut the deficit to 16-13 with 8:03 remaining.

After Will Gholston recovered a fumble at the Buccaneers 45, Brady connected with Chris Godwin for 12 yards on third-and-6 to set up Ryan Succop’s 42-yard tying field goal.

Brady completed all six of his passes for 69 yards in overtime and Succop hit a 40-yard field goal to win it 19-16.

“That’s just who he is,” running back Leonard Fournette said of Brady. “He’s been doing it for years. Guys like myself, Mike (Evans), Julio (Jones), Chris (Godwin), Rachaad, everybody, we’re just playing a part in his greatness. Give him what he wants. He wants certain routes run certain ways. We’re just here to try and make his job easier.”

The Buccaneers (7-8) would clinch the NFC South title with a win over the Carolina Panthers (6-9) on Jan. 1. They’d earn the No. 4 seed in the NFC and home-field advantage in a wild-card game with the most likely opponent being the Dallas Cowboys (11-4).

The Bucs opened the season with a 19-3 win in Dallas.

“If we keep it close in the fourth quarter, we know we’ve got a shot,” Brady said. “I think we’re all comfortable in those situations.”

Brady, the 45-year-old, seven-time Super Bowl champion, hasn’t played up to his own expectations. He threw two interceptions against the Cardinals for the third straight game. But he made the plays when it mattered most.

Save the Children, others suspend Afghanistan efforts after Taliban bar female staff