Trump lashes out at DeSantis ahead of potential 2024 clash 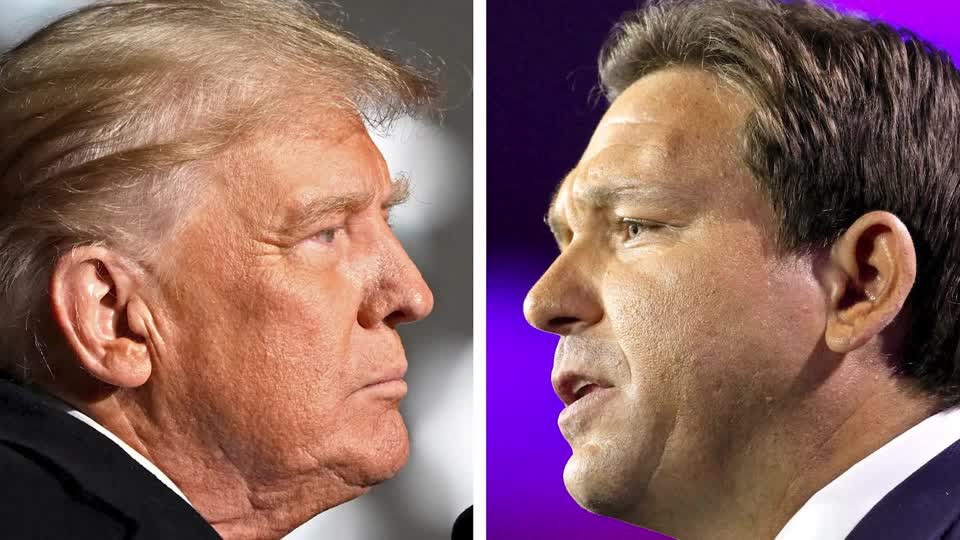 In an attack on the man who many expect to be his main rival for the 2024 Republican presidential nomination, former president Donald Trump blasted Florida Gov. Ron DeSantis on Truth Social Thursday night, taking credit for DeSantis’ rise to power and blasting him for disloyalty.

“Ron came to me in desperate shape in 2017 — he was politically dead, losing in a landslide to a very good Agriculture Commissioner, Adam Putnam, who was loaded up with cash and great poll numbers,” Trump posted. “Ron had low approval, bad polls, and no money, but he said that if I would Endorse him, he could win.”

Lately, Trump has used the moniker “Ron DeSanctimonious” when referring to the Florida governor, including at a rally last week. The nickname made several appearances in Trump’s post.

Trump mocks DeSantis as "Ron DeSanctimonious" at a rally tonight in Pennsylvania. pic.twitter.com/efTl2vNQRB

“And now, Ron DeSanctimonious is playing games! The Fake News asks him if he’s going to run if President Trump runs, and he says, ‘I’m only focused on the Governor’s race, I’m not looking into the future.’ Well, in terms of loyalty and class, that’s really not the right answer,” Trump continued.

The attack comes as the GOP rivals received starkly contrasting press coverage following Tuesday’s midterm elections. DeSantis has been lauded for winning reelection by nearly 20 points in a state he won by less than 1% in 2018 and, until recently, had been considered a quintessential swing state. The New York Post featured him on the front page Wednesday with a headline reading, “DeFuture.”

Meanwhile, many are pointing fingers at the former president for the GOP’s disappointing showing outside the Sunshine State, with the anticipated “red wave” never materializing and many Trump-endorsed candidates losing key races. This failure is leading many to question whether it is time for the party to leave Trump behind and go in a new direction.

Prior to the election, multiple media outlets were reporting that Trump was planning to announce his third bid for the presidency as soon as next week, using the momentum of what he expected would be a big night for Republicans. But Tuesday’s results have complicated the path for Trump, who before the midterms was considered the clear frontrunner for the nomination.

Thursday’s post was not the first time this week that Trump tried to dissuade his chief GOP rival from seeking the nomination in 2024. In a Fox News interview Monday, Trump said of DeSantis, “I don’t know if he is running. I think if he runs, he could hurt himself very badly.”

Trump also claimed to have dirt on the Florida governor, saying in the same interview, “I would tell you things about him that won’t be very flattering — I know more about him than anybody — other than, perhaps, his wife.”

Trump also fired a warning shot against another potential 2024 opponent, Virginia Gov. Glenn Youngkin, writing on his Truth Social Friday, “Young Kin (now that’s an interesting take. Sounds Chinese, doesn’t it?) in Virginia couldn’t have won without me. I Endorsed him, did a very big Trump Rally for him telephonically, got MAGA to Vote for him — or he couldn’t have come close to winning.”

Following his win in a typically Democratic-leaning state, many have suggested that Youngkin would be a strong candidate for the GOP on the national stage.