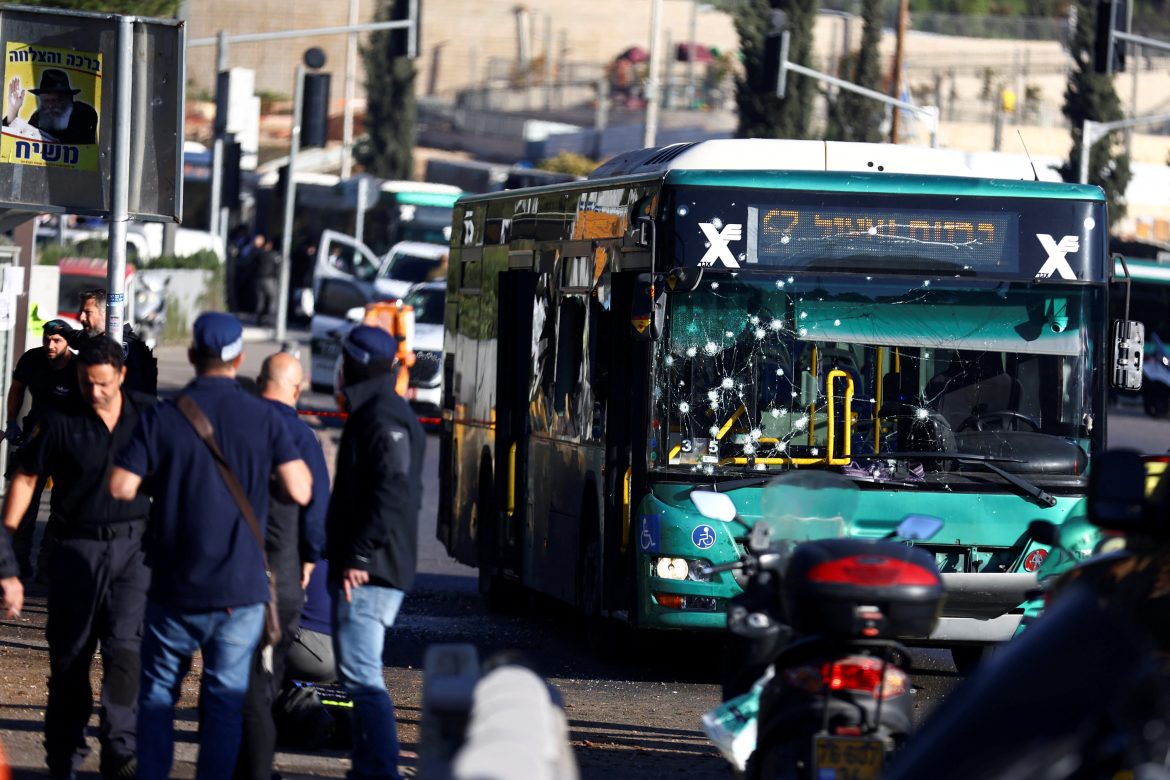 Two bombs exploded at bus stops on Jerusalem’s outskirts on Wednesday, killing a 16-year-old boy and wounding at least 14 other people, in what appeared to be an attack by Palestinian militants, Israeli authorities said.

Police blamed the initial blast, during morning rush hour, on an improvised bomb at a bus station near the city exit. The second – about 30 minutes later – hit a bus stop near a settlement east of the city.

“There has not been such a coordinated attack in Jerusalem for many years,” police spokesman Eli Levi told Israeli Army Radio.

The devices were hidden in bags, packed with nails, and appeared to have been detonated remotely by mobile phone, Israeli public broadcaster Kan Radio said.

Security camera footage showed the moment of the first explosion with a sudden cloud of smoke billowing from the bus stop. Television showed debris strewn around the site, cordoned off by emergency services.

Ambulance services said 12 people were taken to hospital from the first blast and three were wounded in the second. A 16-year-old Canadian-Israeli national died in the hospital.

The United Nations, the European Union, and the United States condemned the attacks, which Israeli officials took note of.

We note the strong condemnation of the bombings from intl friends and partners.

Our security forces continue working 24/7 against the threat of terrorism. pic.twitter.com/MchI2ssIUv

“Terrorism is a dead-end that accomplishes absolutely nothing,” the U.S. Embassy said on Twitter.

Canada’s ambassador confirmed the teen killed was a Canadian citizen and called the bombing a “reprehensible terror attack”.

Benjamin Netanyahu, now negotiating with allies from religious and right-wing parties to form a new government after elections, said he would do everything to restore security.

“We still have a battle against terror that has lifted its head again,” the veteran former prime minister said during a visit to the hospital where the wounded were being treated.

In Gaza, a spokesman for the Palestinian militant group Hamas praised the Jerusalem explosions but stopped short of claiming responsibility. Abdel-Latif Al-Qanoua linked the blasts to “crimes conducted by the (Israeli) occupation and the settlers”.

The explosions, which echoed the bus bombings that were a hallmark of the Palestinian uprising of 2000-05, follow months of rising tension in the Israeli-occupied West Bank after the Israeli military launched a crackdown in the wake of a series of deadly Palestinian attacks in Israel.

The coordinated explosions appeared to be a step up from the string of mostly Palestinian lone-wolf stabbing, shooting, and car-ramming attacks this year.

Separately, Palestinian gunmen late on Tuesday seized the body of an Israeli high-school student from a Palestinian hospital in the West Bank city of Jenin following a car crash nearby, the teenager’s uncle told Kan Radio.

The youth’s father and some Israeli officials said the gunmen took him off life support before carrying him away.

Current Prime Minister Yair Lapid said that Israel stands united against all terrorists and that the kidnappers would “pay a heavy price” if they did not return the body of the teenager.

Prime Minister Yair Lapid: "The State of Israel has been dealing with terrorism since the day it was founded. Our enemies need to know that we stand united and strong against them. We are one nation that knows how to stand together against those who seek our demise."

A diplomat source told Reuters the United Nations was mediating the release of the body and the Israeli military said it expected that would happen soon.

The reasons for the seizure of the body remain unclear.